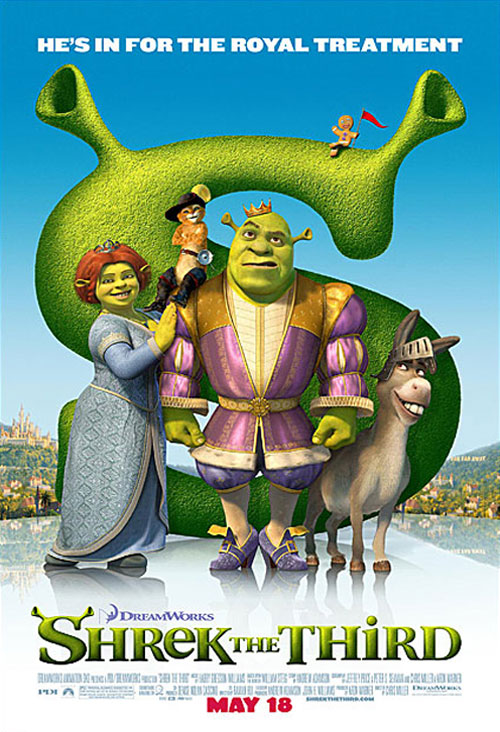 Its been a busy last couple of weeks.  So I’m actually writing this review a lot longer after I’ve the seen film than I normally would for most other movies.

Its surprising how little sticks in my mind from Shrek 3.  I think I remember more from the trailer thats been playing the last few months and even more from the original film which is obviously way, way fresher and more creative than this film ever was.

At this stage, its clear that the Green Machine has turned into a gigantic franchise for Dreamworks.  Witness the announcements of Shrek 5 and 6 well in advance of this film’s premiere and the obscene amount of marketing tie-ins that coincide with the film.  You can buy Shrek cookies and soft drinks from the supermarket, brush your teeth afterwards with your Puss In Boots toothbrush and then go to bed in Princess Fiona bedsheets.  I’m glad I’m not a parent because the kids seem to love this amazing money spinning beast.

Lord knows why.  How do they relate to him?  He reminds me of Al Bundy nowadays.  He’s miserable because he cops a lot of crap doing his royal duties which he views as work, he’s emotionally bottled up and his wife is afraid to tell him she’s pregnant in case he flies into a rage and he acts like a complete jerk to everyone for no good reason.

Toward the final ten minutes of this surprisingly brief film, he wises up, lessons are learned and an inconsequential bad guy is defeated.  Sadly, Princess Fiona who broke stereotypes in the first film as a princess that didn’t need rescuing, actually falls right back into a typecast role and needs help this time.

The film has the occasional gag that might get a smirk out of you.  I cracked some smiles out of Gingerbread Man in particular but the whole assembly line approach to making these movies stinks.  There was some fantastic news I read the other day where Disney finally swore off making those god awful straight to DVD sequels.  Hopefully, Dreamworks will follow suit and stop cranking out these hugely successful franchises which children can’t get enough of and makes them a million billion dollars.

Who am I kidding?

Summary : The enjoyment and good will from the first film has thoroughly worn off. This is a boring, predictable and cynical cash in. Only eight year olds need apply.

Previous: Pirates of the Caribbean: At World’s End
Next: more benoit