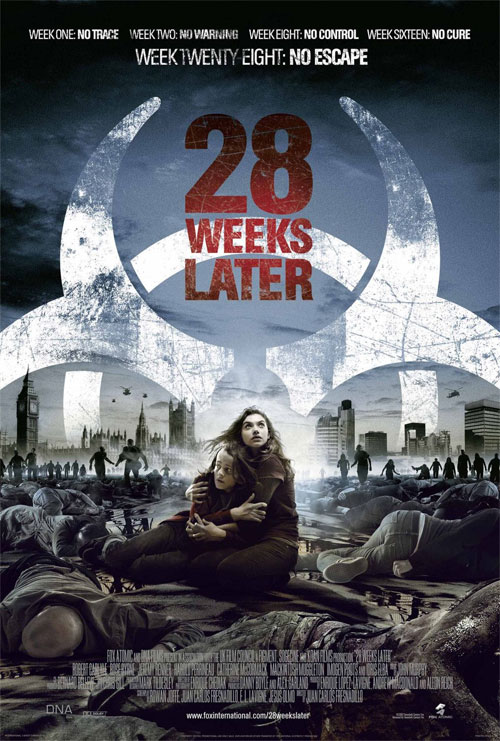 28 weeks after the Rage virus was unleashed on Britain, turning everyone into flesh-eating killers, the epidemic has finally become contained and the country starts a rebuilding and repopulating process.  To help with this important task, American soliders are flown into the country to set up a safe zone which they absolutely assure you has no chance of being overrun by Rage-infected humans whatsoever, no sir.  After a quick twenty minute overview explaining what we missed in those 27 weeks earlier, the rest of the film is about Rage-infected humans overrunning the safe zone.

28 Weeks Later is a decent horror film which features more ferocity and ‘how-do-they-do-that?’ shots of a desolate London than the original 28 Days Later, but falls short of the original in my eyes.  I put that down mostly to my frustration with the choice of who ends up becoming the central characters and survivors.  I won’t spoil it, but its probably not who you paid to spend most of the film with either.  Which is a shame since there is definitely a very cool cast here, of which the standouts are obviously Rose Byrne and Robert Carlyle.  Unfortunately Carlyle plays a rather docile and remorseful husband, robbing us of the potential of Begby and a zombie in a bar fight (yes, I know they’re not supposed to be called zombies).

He plays Don, a man who starts the film by abandoning his wife for safety when their home comes under attack from the infected.  This sounds kind of interesting but there isn’t really any pay off to this story.  He’s in the film a lot but it seems to be more because its Robert Goddamn Carlyle and they have an obligation to use him, rather than providing any satisfying closure to his story arc.  I thought I knew where it was going when he meets his children in the final act and there is a chance to recreate what happens in the opening scene of the film except with some redemption.  I thought wrong and the scene played out entirely different.

A standard in these sorts of films is to have an underlying moral that the root of all evil comes from man itself.  Its there in the Romero films, it was in the original 28 Days Later and its back again in 28 Weeks Later.  This time around, they’ve made it topical and if I’ve got this right, the film is partly an allegory for the War in Iraq.  When the Rage virus overruns the safe zone, the American troops have snipers located on the rooftops who are given the job of trying to contain the outbreak.  Since everyone is running around in a panic though, it makes the regular civilians impossible to distinguish from the infected.  So the order is given to simply shoot everyone.  This can be interpreted as a recreation of the stories you read about of America troops gunning down innocent Iraqi villagers where they too face an impossible task of distinguishing them from suicide bombers who dress in civvies.

While I’m glad 28 Weeks Later isn’t a shitty straight to DVD release and they managed to make a decent sequel in their endeavours, I hope they leave the franchise at two films.  The ending possibly hints at more to come but I don’t really think there is much ground left to cover.  If they absolutely have to make a third film, they should cast Sandra Bullock in it and try and market it as a sequel to 28 Days.

Summary : An entertaining sequel that doesn't reach the heights of the original but is still an excellent zombie horror film in its own right

Previous: Steamboy
Next: Pirates of the Caribbean: At World’s End