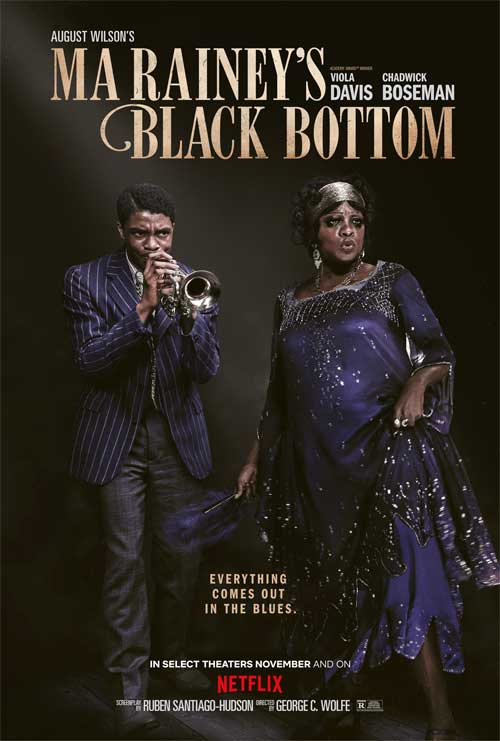 This is it.  The final film featuring Black Panther star Chadwick Boseman who tragically and unexpectedly passed away last year after a lengthy private battle with colon cancer.

Based on a stage production of the same name, Ma Rainey’s Black Bottom is based on the real life blues artist Ma Rainey.  In 1927 Ma is invited to record her hit song Black Bottom at the Paramount recording studio in Chicago.  Ma has a band of seasoned veterans assembled – Toledo, Culter and Slow Drag – but there is also an upstart young, new trumpeter Levee Green (Boseman).  Levee is boisterous, brash and confident.  He sees the recording session as a stepping stone and an opportunity to form a relationship with the studio manager Mr Sturdyvant so he can record his own music.  While he’s at it, he’s brought along some notes to remix Ma’s version of Black Bottom to make it more appealing for the audience listening on radio.

Boseman is a force of nature as Levee.  For a performer so indelibly linked with the stoic superhero T’Challa, it’s amazing to see his transformative talents on display here as the fast-talking, smooth moving hustler Levee.  The old band mates are dubious about his claims that stardom awaits but Levee is so confident and self-assured, they all seem like dinosaurs by comparison.  In particular, Levee seems to understand a different market for popular music awaits through the medium of radio that the old performers can barely comprehend.

Then along comes Ma (Davis).

Ma is Levee’s polar opposite.  She has world weary eyes.  She wears a permanent scowl and makes clear from the outset that she’s itching to find an excuse to go back to Georgia.  Where Levee is all smiles and sugarcoats his words for the white studio managers, Ma is openly disdainful of their presence.  She acts the part of the diva and does so knowingly.  Her entourage includes her girlfriend Dussie Mae and her nephew Sylvester who she insists records an introduction to the track despite carrying a wicked stutter.  After much negotiating and threats of walking out, Ma fully gets her way and when the recording is due to start, she halts everything and demands someone fetch her a coca cola.  Ma gets what Ma wants. 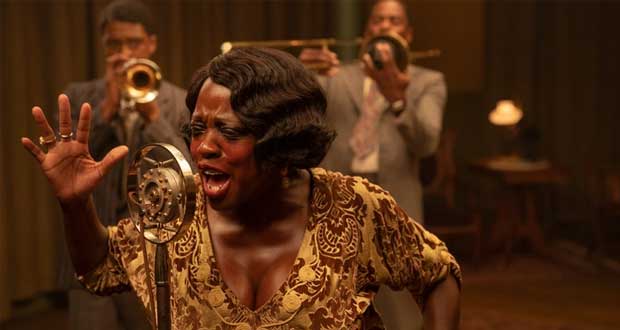 It occured to me that my expectations for how this film would unfold were sharply coloured by Boseman’s casting as Levee.  It’s Chadwick Boseman.  He’s the hero.  He’s in the right.  He understands that radio is the future.  He’s ambitious and has hustle.  He steals Dussie Mae away from Ma right beneath her very nose.  I wonder if the experience with the stage show felt different when its not Boseman playing Levee.

The film takes a turn midway through when Levee loses patience with the band ridiculing his sweetness and deference to the white station manger.  Levee vividly describes his traumatic childhood to the others, revealing an ugly, dark and previously unseen facet of his character.  He shapes to follow in his father’s footsteps and his father – although grievously wronged – was a man who sought bloody retribution against his enemies.

In time, I also began to realise that Ma was in fact the smartest person in the room.  Levee is right in understanding how to write popular music that white folk will listen to on the radio.  But he’s naive in thinking the station manager would ever go along with his plans or cut him a share of the profits.  Ma doesn’t ever bother to learn what the music trends are because she rightly understands that as soon as her voice is permanently etched in a recording, the producers will have no further use for her.  She is independently wealthy already from performing to black clubs in Georgia so she has no need for any of this.  She’s just there to get a pay day not just for herself, but for her family.  And she’s doing it with her dignity intact.  She knows her worth and never doubts or undersells herself for a second.

Once this penny drops, there’s a realisation that the film has a rather severe and cynical world view.  But who can argue against what Ma is doing?  The film’s themes about black self determination make it an interesting companion piece to another award season contender One Night In Miami where black pop star Sam Cooke grapples with a similar dilemma.

The final act of Ma Rainey’s Black Bottom delivers a gut punch.  The recording session is complete.  Some money is made and some dreams are shattered.  The darkness alluded to earlier in the film comes to a sad and inevitable conclusion.

I found myself totally absorbed in Chadwick Boseman’s performance as Levee.  It’s crazy to think he was gone less than a year after this was filmed.  There is such a presence and physicality to his acting.  I had never seen him in anything other than Black Panther prior to this.  I hadn’t fully appreciated the range he had as an actor and its a terrible shame that the world was robbed of many more decades of his characters and storytelling.  His final performance as Levee Green is enigmatic, full of flair, darkly disturbing at times, but nothing short of memorable. 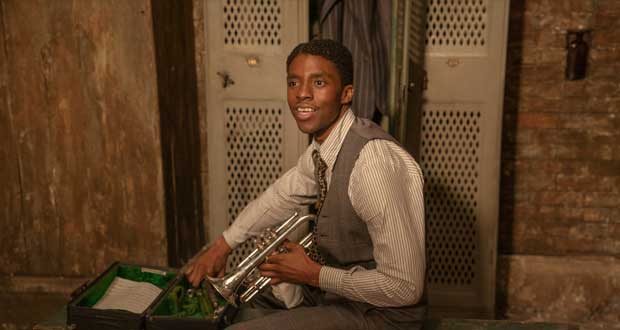 During a recording session, tensions rise between Ma Rainey, her ambitious horn player and the white management determined to control the uncontrollable “Mother of the Blues”.

Summary : An entertaining but unexpectedly dark performance marks Chadwick Boseman's final appearance on the screen. A talent taken far too soon before his time.