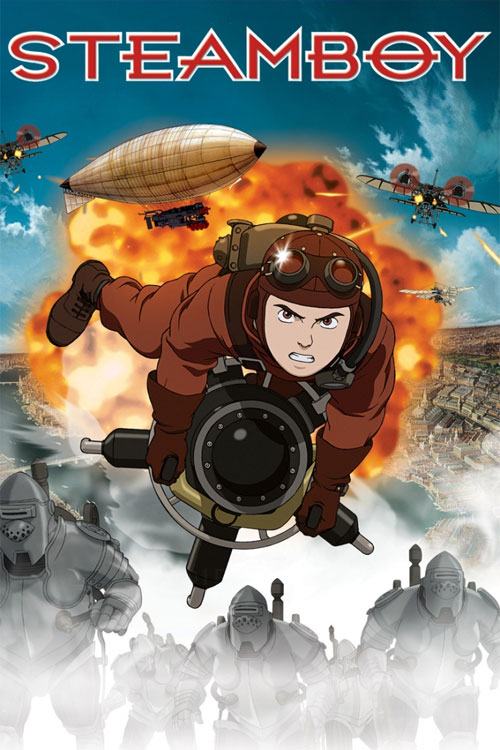 Steamboy is a Japanese animated film from Katsuhiro Otomo, the director of Akira, one of the most popular and well known of all anime films.  As well has having this talent directing Steamboy, the film also has some gorgeous eye catching visuals which create a fantastic alternate history 19th Century England which has a unique blend of grungy steampunk imagery and traditional Japanese anime characterisation.

Sunrise, the visual effects studio which produced Steamboy, are masters of their craft.  Their experience from working on other famous Japanese anime such as Mobile Suit Gundam and Cowboy Bebop really shows here in both imagination and expertise at marrying hand drawn visuals and computer animation together.  When it was made in 2004, the production costs were a cool $26 million, making Steamboy the most expensive Japanese anime made to date.

Steamboy tells the story of a conflict between the drive for technology and human morality, with soldiers fighting for both sides.  In the middle of it all is a young boy who represents innocence and purity.  At the climax of the film, a whole city falls to ruin and we learn that no matter how advanced our technology and weaponry can become, we must be cautious because there is evil in the heart of mankind.

Herein lies the problem.  This plot could also be applied, word for word, to Princess Momonoke, Akira, Ghost in the Shell, Final Fantasy, Metropolis, Appleseed and many other Japanese animated productions.  Unfortunately, Steamboy also compares less favourably to its identikit cousins as the pacing of the story is atrocious and its characters are tiresome mouthpieces for the director’s soapbox ranting about the dark nature of mankind.  Just about every character turns into Basil Exposition and boy is it tedious.

All we can do, is marvel at the visual creativity of productions like Steamboy, which even now, shines brightly with its inventiveness and raw talent and lament the predictable nature of the storyline.  I can think of few examples where a film has such a discrepancy between the quality of its visuals and the quality of the writing.

And finally, if someone could explain to me why this film has Scarlett O’Hara from Gone With the Wind in it and why the main character’s father suddenly turns into the Phantom of the Opera halfway through the film, I’d love to hear why.

Summary : Looks pretty but is rigidly formulaic and dull