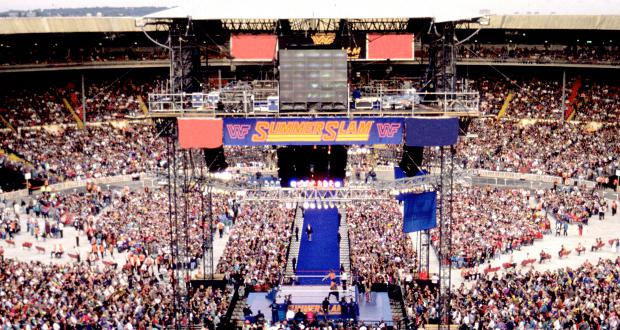 Summerslam is the WWE’s third oldest PPV and historically the second most important event on the WWE wrestling calendar.  Perhaps because it is not quite beholden to the spectacle and weight of expectation that Wrestlemania carries, it is not uncommon for Summerslam to produce the greater matches.  There have been 26 Summerslam events and I’ve seen every one of them.  Out of over 200 matches that have taken place, here is my top ten. 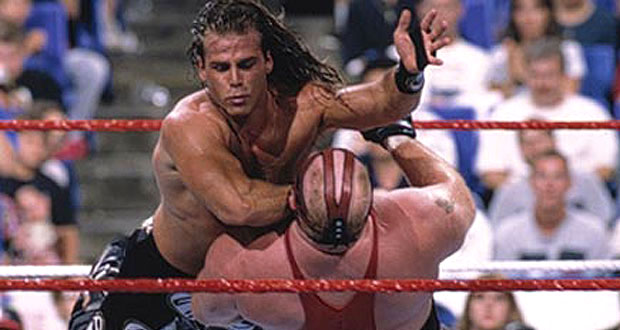 Between 1995 and 1998 when Shawn Michaels was in his prime, he made his name working the best variations of David vs Goliath matches against the biggest monster heels of the decade.  He had classic matches with Kevin Nash, Sid Justice, Mankind, The Undertaker and at Summerslam ’96 he came up against Vader.  When booked correctly, few wrestlers could be as imposing as Vader.  He had a great look, brutal looking offence and some surprisingly high flying moves for a big guy.  This match is great for seeing HBK bounce around like a ping pong ball and work the formula that made him one of the top performers in the country at the time. 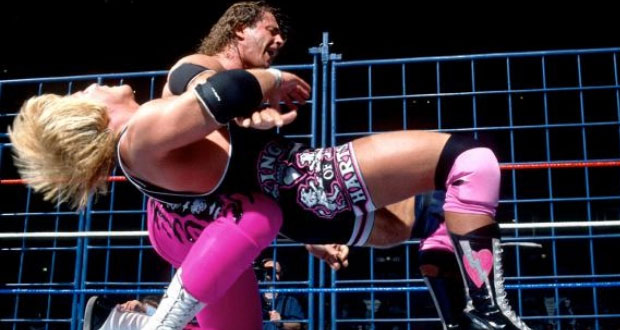 Bret Hart and Owen Hart tore down the house with a classic mat wrestling match at Wrestlemania X which Owen unexpectedly won.  Bret would go on to win the title later that night against Yokozuna.  A month later, Owen would become crowned as the second ever King of the Ring and challenge Bret to a title match at Summerslam 94.  The resulting 30 minute cage match is actually one of the more divisive matches in WWF history.  Some people find the match boring thanks to its long running time and slow climbing of the cage by both participants.  Others think its pretty much the perfect cage match.  For me, I fall into the latter category.  Put it this way – its the most brutal match you can have in a cage without resorting to blood letting.  These two worked their asses off in this match, finding a dozen different ways to incorporate the cage into their arsenal.  In 1994, you wouldn’t have seen a bigger bump on TV than when Bret superplexed Owen off the top of the cage.  It’s a great match and the family feud is taken up another level by the presence of the British Bulldog and Jim Neidhart in opposing corners. 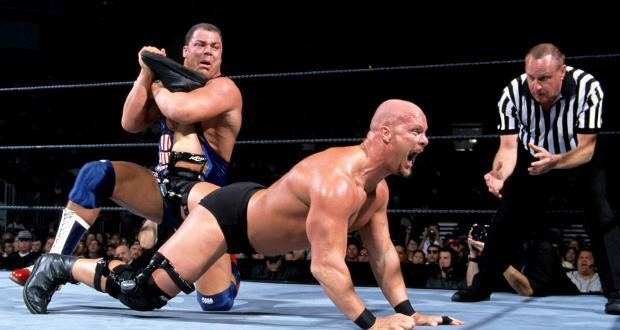 Steve Austin’s heel turn at Wrestlemania X7 didn’t really go down well with wrestling fans.  That PPV was the apex of wrestling’s last major popularity boom with the general public and it’s never been the same since.  A pity since I absolutely loved Austin’s run as a paranoid, desperate heel champion clinging to his title at all costs.  At Summerslam 2001 he faced a rampaging Kurt Angle who had an incredible first two years of his career at was at the top of his game.  In this match these two threw everything at each other – suplexes, chairshots, Stone Cold Stunners, Angle Slams, anklelocks, you name it.  It’s a great match to see just how talented Angle had become in a short span of time and to see how versatile Austin could be when his body was slowing down due to injury and he had to adapt his style. 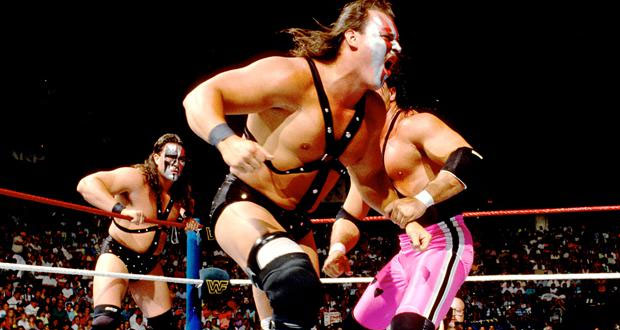 The two best and most over WWF tag teams of the late Eighties and the early Nineties met at Summerslam 1990 in a Best 2 out of 3 falls match up.  There is a lot to enjoy about this match.  As I said, both teams were enourmously popular at the time so the crowd is molten hot for this one.  Demolition had been gradually phasing out Ax with the introduction of the younger, fresher Crush who takes his place.  Of course, Demolition are working as heels so Ax gets involved and swaps places with Crush periodically when the ref isn’t looking.  Lastly, this one of the few times where I enjoy the fact that a match ends with a run-in.  The Road Warriors make their debut in the WWF and get involved in the finish and the crowd absolutely blows the roof off the arena at the end of the final fall.  One of the tag matches in the WWF in that era.  Sadly, neither the Demolition vs Road Warriors or Hart Foundation vs The Rockers feuds after this show would live up to their potential. 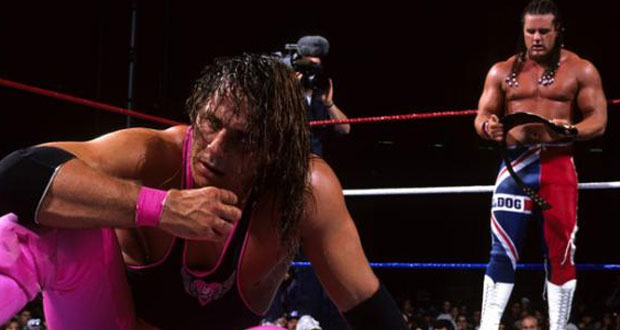 The biggest crowd to witness a Summerslam event was Wembley stadium in 1992 where over 80,000 people witnessed the British Bulldog defeat Bret Hart for the Intercontinental Title.  I absolutely loved that match as a kid.  It’s a great face vs face encounter where Bret gradually gets frustrated with Davey Boy and begins working some subtle heel mannerisms to antagonize the crowd.  Years later, wrestling fans would read and learn about how Bulldog was gassed within five minutes of the match and scrutinizing it with a more critical eye you can see just how many times Bulldog’s nerves get the best of him.  He drops Bret unceremoniously onto the concrete floor early on, dumps him painfully crotch first onto the top turnbuckle and slips and throws him dangerously into the ropes when doing a gorilla press slam.  Basically the British Bulldog inflicted some serious hurting on the Hitman who remains a consumate professional and holds the match together so it is never anything less than enthralling.  Probably one of the best examples of how one man can carry another to greatness. 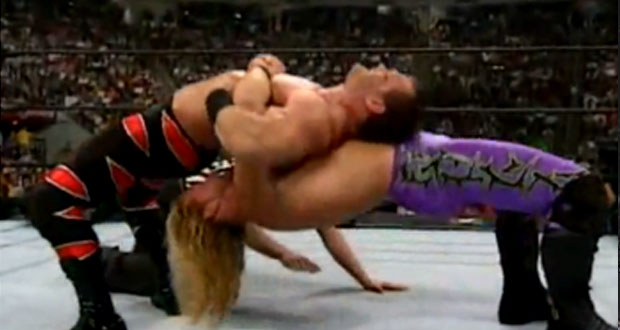 The Canadian Chrises had a fantastic run of matches during their feud in the early 2000s and their Best 2 out of 3 falls match at Summerslam 2000 was my pick of the bunch.  For a straight up, no-nonsense wrestling encounter between two dudes who know one another really well and really hate each other, it doesn’t get much better than this.  The work rate is intense, both men are in their primes and delivering a scintillating combination of mat grappling, aerial maneuvers and awesome submission holds and counter holds. 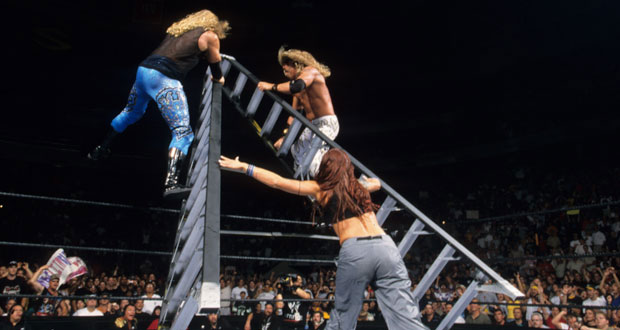 For my money, the first TLC match between Edge and Christian, the Hardys and the Dudleys is still probably my favourite.  Sure we had an inkling of what these teams could do based on their Wrestlemania 2000 ladder match and the Royal Rumble 2000 tables match but I will never forget watching this match for the first time as all six wrestlers busted out jaw dropping bump after jaw dropping bump.  Some famous JR catchphrases were born out of this encounter.  In some ways, they set a new standard that could and probably shouldn’t ever be topped when it comes to this type of match.  The spectacle in this type of match deliver so much carnage and unrelenting action that I’m not surprised that this is one of the most commonly used matches by diehard fans to introduce casuals into the WWE.  All three tag teams were magnificent on this night. 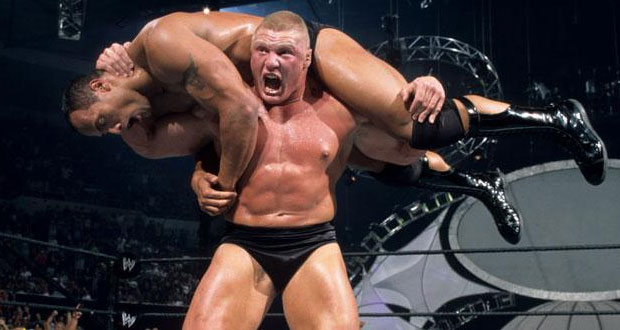 When it comes to wrestling as a spectacle that blends athleticism with charisma, this match is one of the finest examples you can witness.  Brock vs Rock at Summerslam 2002 was the star-making match up that marked the arrival of Brock Lesnar as a main event player.  3 years after this match, both men would outgrow the industry with Brock leaving to UFC to win his first MMA Heavyweight title and The Rock would finally go to Hollywood full time and reinvent himself as a Hollywood blockbuster movie star.  I love this match for the pure power and athleticism that both wrestlers exhibit.  The match has a great blend of power moves and wrestling holds as both men throw everything at one another.  The Rock does everything right to make Brock look like a million bucks to credit to him, Lesnar more than holds his own also. 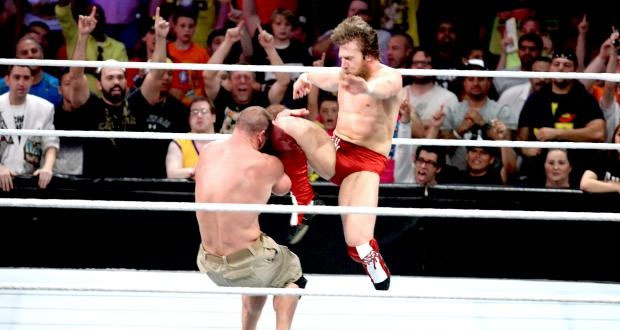 The modern day version of HBK vs Vader is Daniel Bryan vs John Cena and although time will tell what sort of longevity and significance Bryan’s career will have, no one was hotter in the professional wrestling than Daniel Bryan in 2013.  His name and catch phrase was chanted at deafening levels in show after show, often in matches he wasn’t involved in and sometimes in entire shows where he was not performing.  The people wanted to see one thing and that was Daniel Bryan conquer the odds and win the title.  He would get that opportunity against the face of the company, John Cena, at Summerslam 2013.  In that match, the two of them put on a thrilling match as Cena used his brute strength and size advantage to impose his will on Daniel Bryan.  But Bryan would not be denied and after launching comeback after comeback, he would finally blunt Cena’s offence with a flying knee which has since become his trademark finishing move. 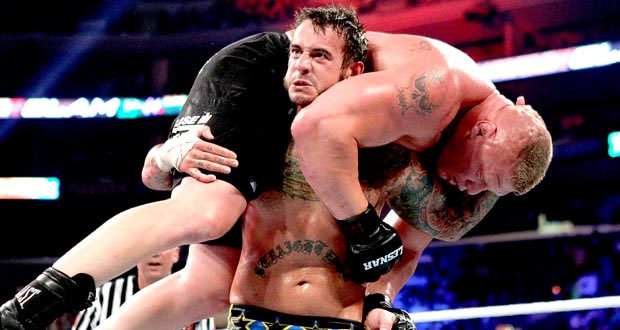 CM Punk held the WWE title for over 400 days in a record breaking title reign that took place mostly in 2012.  However, he was constantly overshadowed by John Cena who retained a higher billing on the card.  So after Punk lost the title to The Rock, it almost felt like he still had a point to prove and he accomplished this by having another year of show-stealing matches.  First against The Undertaker at Wrestlemania 29 and then again at Summerslam 2013 when he had, in my opinion, the best match in the history of the event.  Punk and Lesnar had an absorbing encounter where both men incorporated MMA holds and submissions alongside conventional wrestling holds.  Both men played their roles to perfection, Lesnar as the physically dominant bully and Punk as the angry and scrappy underdog who doesn’t know when to quit.  This is one of those near-perfect matches for me where every move is hit perfectly, the intensity never lets up and it always holds my attention from the opening bell to the final pin fall.  I wouldn’t change a thing about this match.