The opening screen of This Is It tells us that the footage we are about to see from the ill-fated tour’s rehearsals was recorded largely for Michael Jackson’s personal video library. It then begins with a series of interview snippets from dancers addressing the camera and telling Michael how awesome and life-changing he is. I guess if I was the King of Pop, I wouldn’t mind indulging in a bit of self-grandeur too.  Fortunately, it is the film’s only real indulgence in outright hero-worship.

The documentary This Is It is a surprisingly low-fi look into the rehearsal of what was to be Michael Jackson’s final concert tour.  When the film was originally announced, I had anticipated that it was going to be stacked with special effects as if to recreate what the final product was intended to look like. Instead, what we get is a two hour documentary that employs the use of both high and low definition video, to show us the process Jackson and show director Kenny Ortega go through to prepare the concert as they rehearse.  Interestingly, Jackson is very hands on throughout.  He works closely with the musicians, dancers and choreographers.  He micro-manages his way through the performances, stopping periodically to adjust the timing or to suggest alterations to the choreography.  He is a perfectionist and carefully plans every iota of the production.

Surprisingly, Jackson himself appears to be in excellent shape. Although 50 years old, he manages to keep up with performers half his age and does so by making his routine slightly restrained compared to when he was in his prime.  Gone are the exaggerated shoulder shrugs and swaying gestures from the original Thriller video but by dancing a more conservative style, he maintains the smoothness and sharpness in his routine.

Although I described the production values of the documentary itself as low-fi, the concert itself appeared to be anything but. Several video montages were prepared for the concert and we are treated to seeing them in their completed state. There is an entertaining gun-fight showdown with Humphrey Bogart which was the lead-in to Smooth Criminal and also an entirely new Thriller video which was to be complimented with giant mechanical ghosts soaring over the heads of fans in the O2 arena. When placed alongside a scorched earth set for Earth Song and a terrific Broadway style recreation of The Way You Make Me Feel, it looked like this show was going to be an entertainment spectacle for the ages, with no expense spared.

Although some may be disappointed in the documentary not covering his finals days in any great detail, the candid snippets throughout the show still offer an insight into the man himself.  Jackson certainly does embody some of his stereotypes, perpetually soft spoken and doing everything ‘for love’. However, it is also easy to see why people close to him found him so likable. Although eccentric in the extreme, his playful manner and relentless positivity is also quite endearing. It’s also fun to see Jackson in the rehearsals where he doesn’t always maintain his game face. At the conclusion of one particularly lengthy and complex dance routine, as the stage lights dim, they manage to capture a wide ear-to-ear grin on Jackson’s face, as he is clearly pleased with himself for completing his routine. These are some of the best moments of This Is It.

Also, if you haven’t seen it yet, stick around after the credits. Why? I don’t know. I left before they finished. Apparently there is something there. Too bad I left early 🙁

Previous: My sister Sarah, the artist
Next: FIFA 10 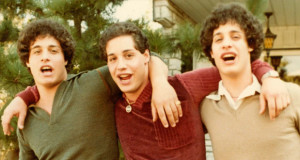