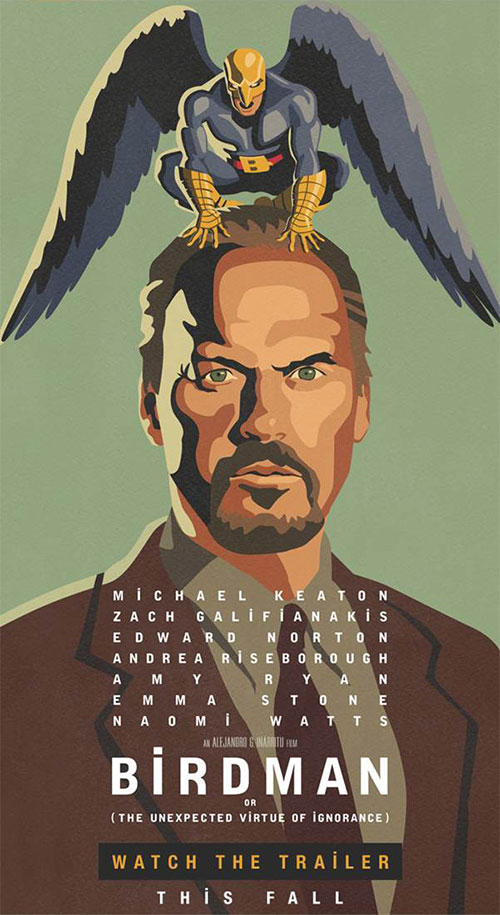 I saw Alejandro González Iñárritu’s debut feature Amores Perros back in the year 2000.  Amores Perros was a multi-strand narrative set in Mexico City which followed the lives of three different sets of people.  Although their paths occasionally intersected the common thread linking the stories was violence inflicted upon their pet dogs.

I found the film extremely challenging to watch and I have no desire to watch it again, although I begrudgingly respected the artistry with which Iñárritu made the film.

He then went on to make 21 Grams, Babel and Biutiful, each film more wretched and miserable than the last.  I find him to be one of the most nihilistic directors getting work in Hollywood today.  Each of the films has an ensemble cast who suffer a great misfortune, mental anguish, physical suffering or often all three at once.  Gradually I got a sense of diminishing returns with Iñárritu because I felt that the misery was devoid of any purpose and his films felt increasingly mechanical and predictable in their nature.

In Babel, when he actually gave one of his character’s a tiny glimmer of hope at the end of the film (they decided not to kill themselves) I joked that maybe Iñárritu had gone soft.  “Perhaps his next film will be a romantic comedy” 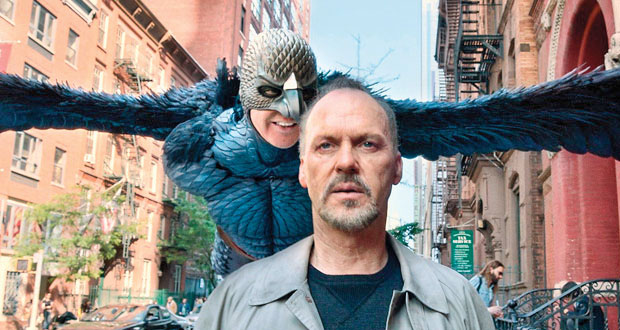 Riggan has one last shot at becoming a big star and his fortunes hang on the success of his Broadway adaptation of Raymond Carver’s “What We Talk About, When We Talk About Love”.  The success of Birdman has seen Michael Keaton’s fortunes rise once again and tomorrow, his improbable comeback will be complete if he wins the Best Actor award.

Birdman is nothing like any of Iñárritu’s previous films.  Birdman is a positively light and buoyant in tone compared to the likes of Babel and 21 Grams.  The film opens in memorable fashion with a zen Michael Keaton floating in the air with his legs folded in the lotus position wearing nothing but his y-fronts.  He seems calm and collected but is disturbed by the raspy omnipotent voice of Birdman in his head.  That’s just the start of it.  There are scenes in the film where Keaton fights Ed Norton who puts up his dukes wearing nothing but his undies and later still, Keaton accidentally locks himself out of the theatre in his jocks and has to hastily make his way back in by way of Times Square.  This is Alejandro González Iñárritu finally saying ‘fuck it’ and having a bit of fun.

The film is an stylistic assault on the senses that will likely enthral as many people as it annoys.  Birdman is shot in a single interconnected swoop of the camera, where the passing of time occasionally speeds up and slows down as the camera zig zags through the mazey corridors of St James theatre.  The film’s musical score is entirely composed of a snare drums fills and beats played by a man who we occasionally see in the background.  I can’t even begin to imagine the technical wizardry required to construct a film in this way.  I discovered after watching Birdman that it was the work of Emmanuel Lubezki who also shot Gravity.  He is surely the most technically gifted cinematographer around today.

The story in Birdman is a weird, shapeless mess that mostly ebbs and flows with Riggan reacting to people, storming into the next room and gradually losing his mind.  It’s equal parts drama and comedy, post modern and self aware to the nth degree.  The cast of characters are comprised of every show biz cliche under the sun.  There’s a desperate agent played by Zach Galafianakis.  Emma Stone is Riggan’s neglected and resentful daughter Sam.  Ed Norton has an entertaining turn as a rival actor Mike who is an alcoholic womanizer.  Naomi Watts is Riggan and Mike’s costar Lesley who desperately craves recognition and is involved in a messy love triangle.  Ooh – and there’s also a bitter critic who thinks all actors are self entitled ratbags.

I must admit, I wasn’t taken with Birdman nearly as much as I had hoped for when I first saw the trailer and heard the buzz about this film.  As much as I enjoyed the crazy ambitious special effects and seeing some of my favourite actors playing whacky caricatures of themselves, the overall package was still too self aware and cutesy for me to properly engage with the film.  There were individual scenes that grabbed my attention and brought a smile to my face but it never sustained it.  I applaud Iñárritu for taking his work in a different direction and I hope the success of Birdman will encourage him to keep going down a fresh path.  But for me, this was film that confounded and confused more often than it entertained.

A washed up actor pins his hopes of a big comeback on a Broadway production.

Summary : Birdman is Iñárritu's most creative work in years. I enjoyed the film in patches but not nearly as much as I'd hoped

Previous: The Imitation Game
Next: The 87th Academy Awards