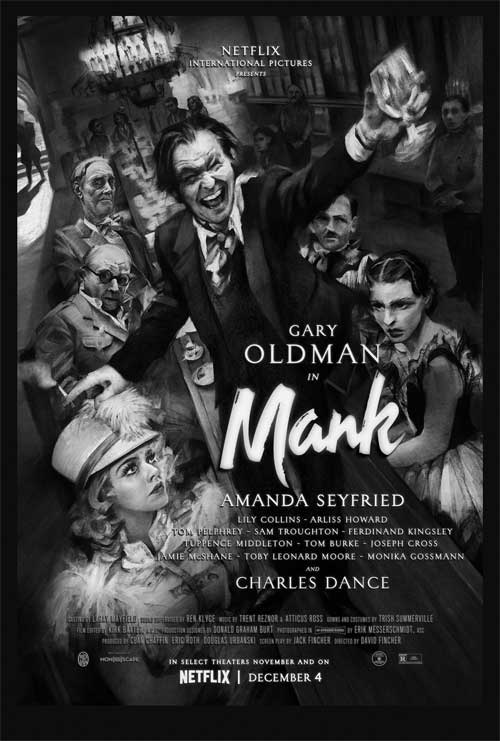 Herman J. Mankiewicz is in a bind.  He has been granted an incredible opportunity – absolute creative freedom to write a screenplay for Orson Welle’s next RKO motion picture.  Unfortunately for Mank, he is bed-ridden after a serious car accident.  He is barely containing a descent into full blown alcoholism.  Worst yet, he has a bad bout of writer’s block.

Mank is a biographical film about the little known uncredited writer of the first draft of Welle’s magnum opus Citizen Kane.  Depending on who you believe, this film may or may not be based on true events.

Two events set Mank on course for the creation of the Citizen Kane screenplay.  Firstly, he becomes taken by actress Marion Davies, the beautiful partner of millionaire media mogul William Randolph Hearst.  Mank and Davies have a meeting of the minds over politics and Hollywood itself.  Mank also takes an interest in upstart political activist Upton Sinclair who is running for Governor against Republican conservative Frank Merriam, much to the consternation of the RKO bigwigs and Hearst himself, who bankrolls a big smear campaign against Sinclair. 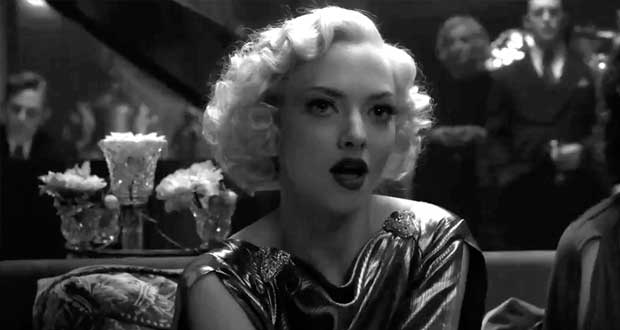 Oddly enough, Mank itself, has had a tumultuous journey getting into production.  It was originally written by David Fincher’s father Jack in the mid Nineties, with Kevin Spacey and Jodie Foster in mind for the leads.  I don’t say this as a slight against the film but it definitely has the feel of award season fare from the Nineties: a biopic about a brilliant-but-flawed genius who disdains Hollywood schmoozing and finds his purpose through a beautiful muse.

There is plenty to admire about Mank.  Fincher is one of Hollywood’s most reliable and assured directors and as you’d expect, filming his late father’s work would be a real passion project and that comes through in the film’s attention to detail.  The set design, costumes and score are all first rate.  The performances from Gary Oldman (Mank), Amanda Seyfried (Marion Davies) and Charles Dance (William Randolph Hearst) are excellent and have drawn plenty of admiration from critics.

Although there is no denying that Mank is a handsomely mounted feature with lavish production values, I must admit I walked away with very little love for this film.  Very much like Citizen Kane itself, I respect the film but it does very little to engage me beyond a very shallow, surface level.

I’ll be honest, I’m not entirely sure what message Fincher is striving for, if any, with Mank.  In 2021, you would think a film about a mega-rich media mogul who tries to control the political fortunes of the country that sets wealthy elites against the working class would feel both relevant and informative.  There are plenty of modern parallels to what happens to Upton Sinclair in the film after all.  Despite the film engaging in these ideas, it feels rather clinical and perfunctory.  I didn’t come away with new ideas or a different perspective. 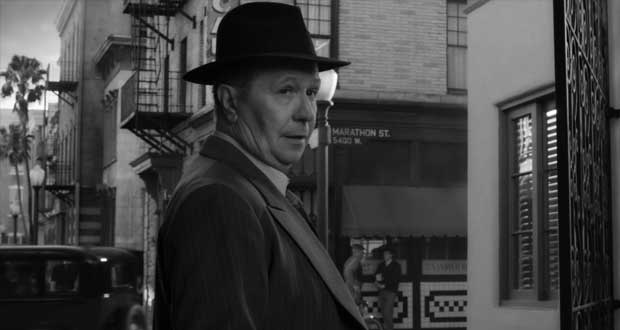 Likewise, for a film could optimistically be viewed as a love letter to a famous era of Hollywood, I don’t think it is nearly as successful in that endeavour as, say, the Coen Brother’s recent comedy caper Hail, Caesar! which was one of favourite films of 2016.

There’s definitely something there with Mank but it did not click with me.  I wanted to like the film a lot more than I did.  Part of me wonders if I revisit it in a few years, whether that viewpoint may change.  As it stands, I thought it was a solid production that desperately lacked warmth.

1930’s Hollywood is reevaluated through the eyes of scathing social critic and alcoholic screenwriter Herman J. Mankiewicz as he races to finish the screenplay of Citizen Kane.

Summary : A competently crafted film about the uncredited writer of Citizen Kane and the politics of Golden Age Hollywood. Although there's no denying the film's qualities, I struggled to engage with the film.

Previous: The Trial of the Chicago 7
Next: Minari