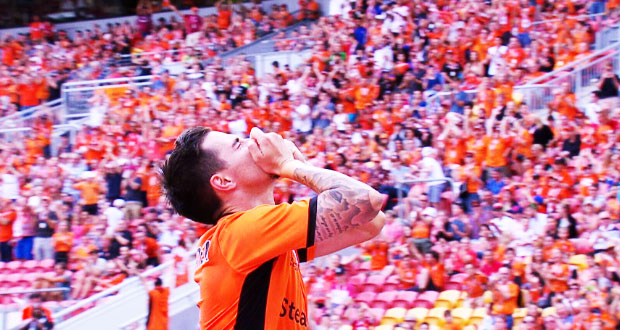 After a run of four consecutive draws, Brisbane Roar finally came good in front of their home fans with a 4-0 demolition job of the reigning champions Adelaide United.  A brilliant brace for Thomas Kristensen in the first half brought his personal tally to five for the season.  In the second half Thomas Broich and Jamie Maclaren finished the job.  For Maclaren it was his fifth goal in six games and a goal he dedicated to his late grandmother.

The resounding victory was welcome relief for the Roar and have had goal scoring woes all season.  The win helps give the club a positive outlook on recent weeks.  They are now undefeated in eight games with four wins and four draws.  They remain same way off the pace to catch league leaders Sydney FC but they are right in the mix with the two Melbourne clubs and have some daylight between them and the rest of the league.

Matt McKay has re signed with @brisbaneroar so here’s a pic of him with a cake pic.twitter.com/oOPytackXs

The Roar’s four nil win at home against Adelaide brought back fond memories of the last time the club achieved such a feat – five years in 2011 when they won their maiden championship.