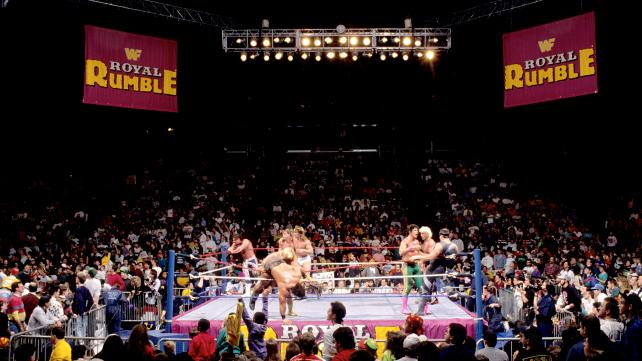 “Ladies and Gentleman, it is now time for the Royal Rumble!

Earlier today the 30 participants who entered, drew numbers at random. In just a few moments the individuals who drew number one and number two will be in the Royal Rumble and every two minutes thereafter another individual will enter the ring according to the number he drew. Remember, in the Royal Rumble it is Every Man For Himself. And elimination occurs when a wrestler is thrown out over the top and both feet touch the floor. The one man remaining in the ring after all 30 participants have entered will be declared the winner of the Royal Rumble and will go on his way to face whoever the champion is at Wrestlemania!”

The Royal Rumble is hands down my favourite WWE pay-per-view.  I saw my first Royal Rumble way back in 1989 and it remains one of my favourite Rumble matches – it had an unpredictable winner (Big John Studd) and plenty of cool moments throughout (Demolition draw 1&2, Megapowers break up teased).  We are now only a week away from the 2013 edition of the Royal Rumble!

So what makes a good Rumble?  On face value, its an hour long battle royale with 30 dudes beating the snot out of each other.  But once you’ve seen a few, you’ll pick up some signature spots that all the best ones have.  Here are some of the best things about Royal Rumbles:

Iron Man Performances
In some of the earlier Rumbles, the iron man role was given to some pretty random candidates including Greg Valentine (1991), Rick Martel (1991) and Bob Backland (1993). Most of these performances didn’t seem to lead to any major push and I kinda liked that. It was just an arbitrary push given to some random dude to showcase what they could do. The most famous of the early iron man performances is Ric Flair, who entered the 1992 Royal Rumble at #3 and made it all the way to end, outlasting the most stacked Rumble lineup of all time which included Hulk Hogan, Randy Savage, Sid Justice, The Undertaker, British Bulldog, Jake Roberts and Shawn Michaels. I’d love to see the 2013 Rumble have a surprise iron man performance.  In the modern era the iron man spot is usually reserved for someone who is already a main eventer.  I’d love to see an exception this year though.  How cool would it be if William Regal or Wade Barrett got the iron man role?

Cleaning House
Diesel really became a star at the 1994 Rumble when he came in and eliminated everyone in the ring and then continued to eliminate a bunch more as they came down one by one. A dominating performance at the Royal Rumble can turn wrestlers who are on the cusp into major stars. I always enjoyed Steve Austin coming in and cleaning house in the Rumbles from 98-02 and more recently, the chickenshit CM Punk heel performances where he tosses a bunch of dudes before getting his come uppance from Triple H or John Cena are pretty entertaining too. That pop when Cena eliminated the entire Nexus leaving only a wide-eyed Punk in the ring…awesome.

Mega Stars collide
The crowd at the 1990 Royal Rumble became unglued when Hulk Hogan and Ultimate Warrior cleared the ring and turned to face one another. An amazing moment in early Rumble history.   It was replicated 11 years later when Austin and the Rock collided in the 2001 Royal Rumble as a precursor to their match at Wrestlemania 17.  Sadly, the saturation of wrestling shows nowadays means that there isn’t quite as many dream encounters left.

Oh shit, That Guy is next!
One of my favourite Rumble spots is when a heel cleans house, is desperate to catch his breathe, only for a huge face to come out next. In the early Rumbles, my favourite instance of this is 1992 where Flair’s reaction to Roddy Piper coming to the ring is just perfect. Ten years later I also liked the cool visual of a bloodied Chris Jericho eliminating Edge and Christian only for the crowd to pop when Rob Van Dam’s music hits.  Another classic variation of this is when an exhausted Steve Austin cleans house only for the next entrant to be Bret Hart (cue squeally guitar chord entrance).

Tag Team interaction
Demolition drawing 1 & 2 in the 1989 Rumble and then proceeding to beat the crap out of each other was a great way to sell the Every Man For Himself concept. I also enjoy seeing former tag teams re-igniting old feuds. I thoroughly enjoyed Tito Santana rushing out and slamming Rick Martel’s head into the turnbuckle a bunch of times and Christian hugging Edge in the 2003 Rumble and trying to convince him to eliminate Rey Mysterio.

Royal Rumble Continuity
No matter what the year and no matter how hard he was being pushed on the card, Macho Man Randy Savage totally sucks at Royal Rumbles. Also, there was a period where Shawn Michaels eliminated Shelton Benjamin three years in a row.

Overconfident Heel
A classic Rumble spot is when the heel thinks he’s eliminated someone, celebrates, then turns around and gets eliminated immediately after. A couple of great examples – Jeff Jarrett doing the Flair strut only to get tossed by Randy Savage in ’94 and Chris Nowinski emphatically crying out ‘two people!’ when he thinks he eliminates Edge and Rey Mysterio in ’03.  I look forward to a similar spot with Damien Sandow thinking he has outsmarted someone, only to get eliminated himself.

Surprising eliminations
Its weird watching Royal Rumbles in the past when you don’t have the context of where a wrestler is in their career or how hard they’re getting pushed at the time. It’s particularly strange when a legendary wrestler gets eliminated in unremarkable fashion. Of the most famous underdogs to eliminate The Undertaker is Maven in 2002 but I think its even weirder that he gets eliminated cleanly by Haku a year earlier in 2001. Haku just casually crescent kicks him out like its no big thing. Also, Shawn Michaels lasting 10 seconds in the 1990 Rumble is pretty crazy considering he wins the damn thing five years later.

Surprise Returns
It took a while for Rumbles to introduce surprise entrants as the early Rumbles had all thirty participants announced in advance and everyone got a twenty second promo talking about why they’d win the Rumble. Some of my favourite returning wrestlers (and the ensuing crowd reaction) include Mr Perfect at 2002 and of course, John Cena at 2008 when Madison Square Garden lost its shit and for ten seconds, forgot they hated the guy.

Chicken Shit Heel
Jerry Lawler is pretty famous for his chicken shit performance where he hides under the ring. I’d actually love to see someone utilize a spot of his from a mid-Nineties Battle Royal where he hopped around on the arena floor on one foot to ensure he wasn’t eliminated. Until Bret Hart punched him in the face that is.

Everyone eliminates a big fat guy
Why don’t they do this anymore? Its always a cool visual when Andre the Giant, Earthquake or Viscera gets eliminated in this fashion. We need more gigantically obese wrestlers in WWE so they can be eliminated by everyone in the ring.

Find A Dance Partner
Haven’t got anything planned for Wrestlemania? Why not eliminate the person who eliminated you and brawl back to the locker room! Then settle the score at the Grandest Stage Of Them All. Or if you weren’t entered into the Rumble, do a run-in and get revenge on that guy that cost you in that big match a few weeks ago.

I think the first time this happened was with Rowdy Roddy Piper and Bad News Brown in 1990. I also remember this was how Goldberg vs Brock Lesnar got its start too.

If you feel like watching some old Royal Rumbles, here’s a bunch of links!  Go nuts!

And here are my predictions for the 2013 edition.

Punk faces his toughest opponent yet in his record breaking title reign that has seen him hold the belt since November 2011 (over 400 days!!!).  He’s carrying a million injuries and barely scraped through a TLC match against Ryback in the first RAW of 2013.  But now he’s so close to reaching a second consecutive Wrestlemania as champion.  As much as I want to believe otherwise, I think Punk has reached the end of the line here.

Prediction:  Your winner and new WWE champion, The Rock.

It’s kind of weird that Del Rio, whose character is that of a wealthy jerk (ala Million Dollar Man and JBL), has turned into a big time face champion for the WWE.  But who cares because he’s a cool dude and he has the best ring announcer in Ricardo Rodriguez.  After two previous title reigns that barely lasted longer than a cup of coffee, surely Del Rio will retain here.

Why did WWE start putting ‘Team’ in front of all their tag-team names?  It sounds dumb

Anyway, as awesome as Team Hell No are, I would love to see Daniel Bryan move back into singles wrestling and into the spotlight.  For that reason, I’ll be cheering for Team Rhodes Scholars to pick up the win here.  It helps that they are totally awesome too. Man…they haven’t really announced many people in the Rumble yet.  It’s kind of hard to predict what will happen since we don’t know who is in the damn thing :/

Winner:  Ryback.  He’s not confirmed to be in it yet but he’s my pick.

Previous: Blogs From America – Anaheim
Next: Life of Pi