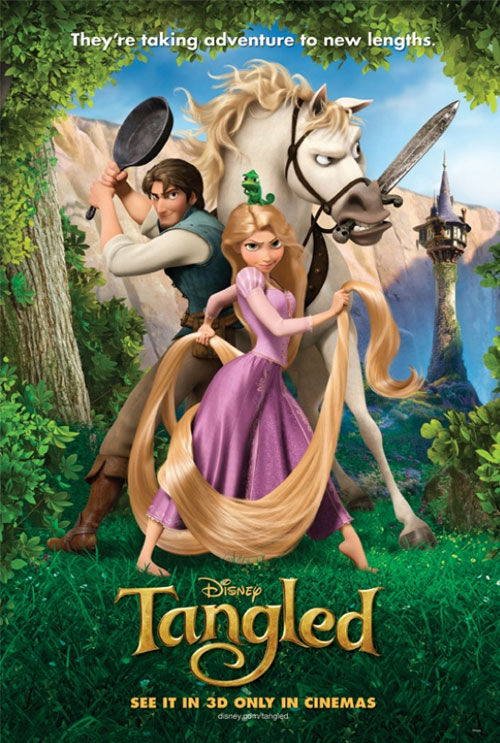 The opening title credit for Tangled tells us that this is a milestone feature for Walt Disney Pictures: it is their 50th full length animated film.

This adaptation of the fairy tale Rapunzel sees a return to form and confidence for the House of Mouse.  In the past decade, the legendary studio struggled with its sense of identity and direction as it fell out of favour with audiences who were drawn to newer and shinier all-ages films from other companies.

Disney had made its name on hand drawn animated musicals with dashing Prince Charmings and sweet natured Princesses but they had begun to feel outdated when pitted against the pop-culture loaded Dreamworks films that eschewed musical numbers for pop song montages and Pixar’s greater willingness to experiment with their visual style and ambitious characterisation.  It began to feel like the fairytale format was becoming a liability for Disney and you could sense they felt it too.  Even in some of their better efforts of the past decade like Enchanted, they were self-depracating in their portrayal of the Disney Princess. Tangled on the other hand is just about the perfect marriage of modernisation and tradition for Disney.

The story has its roots in the fairytale of the golden haired Rapunzel, a princess who is kidnapped and taken away from her castle by the elderly witch Gothel, who must hear Rapunzel sing The Healing Incantation to retain her youth.  Rapunzel is locked away in a tower by Gothel until her eighteenth birthday when a cocky thief named Flynn Rider accidentally stumbles upon her lair and ultimately agrees to take her out into the world.

Tangled employs the use of computer-animated visuals but its colour palette and clever filtering give the imagery the look and feel of an oil painting.  There is no attempt at photo-realism here.  Instead, there are some absolutely stunning images in this film with a scene involving hundreds of paper lanterns soaring into the night sky being a particular stand out.  The benefit of using computer animation comes to the fore in some of the smaller details of the film.  The highly detailed close up of a pained and anguished father, despondent at marking another anniversary of her daughter’s absense drew a strong emotional response from me that I wasn’t expecting from this film. 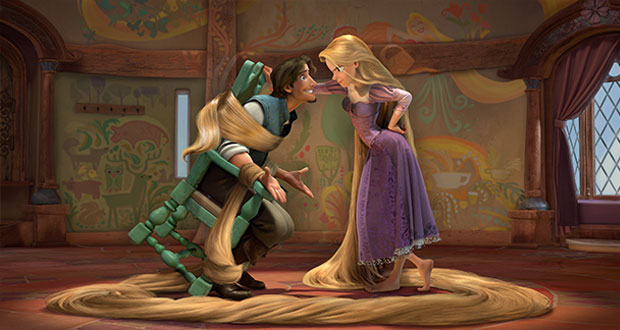 The anchor that holds Tangled together is its skillfully delivered and confident storytelling.  The tale itself is pretty well worn and familiar territory but it is told with a sincerity that isn’t afraid to reach for some ambitious emotional highs.  The film has faith in its audience that they can enjoy the slapstick humour but also become invested in the characters enough that they care for what happens to Rapunzel and Flynn.

The nature of the relationship between Rapunzel and Grendel, who she believes is her mother, is new territory for Disney.  Although Grendel is a witch, she does not use a spell to lock Rapunzel in her keep.  Instead, Grendel emotionally blackmails Rapunzel by making her fear the outside world.  I imagine it would strike a chord with any women in the audience that ever rebelled against their mother’s curfew as a teenager and it gives the film a bit of social commentary on overprotective parenting too.

Rapunzel, played by Mandy Moore, strikes a balance between being an earnest world-conquering Disney princess and cabin-feverish reclusive hermit.  One of my favourite scenes was the sequence in which she first steps out of her tower and goes through a range of emotions as she embraces her newfound liberation but simultaneously becomes crippled with guilt over what Grendel would think of her.  Its this willingness from Disney to add an extra dimension to their characters that made Tangled feel like a much fresher film than some of their previous efforts.

Tangled also has some fast paced and sophisticated editing that trusts that its all-ages audience can keep up.  I’m sure they can.  This is a generation that has been raised on the Family Guy non-sequitur joke format after all.  The confident use of jump cuts in Tangled to tell some of its sight gags were particularly excellent.  The entire sequence in which Rapunzel repeatedly attempts to stuff Flynn into a closet worked even better because of the way in which it was edited.  Much like the storytelling, the visuals, the musical numbers and the characterisation, the editing in this film is polished to perfection.

Tangled may well represent the way forward for Disney.  Critically, it is one of their most well-received films in years.  Commercially, they’ll want to hope it finds an audience after six years in development and a cool quarter of a billion dollars of production costs.  I hope it does find the audience that it deserves.  The film is good natured, respectful of Disney tradition but feels fresh and new all the same.  In a strong year for animation that counts Toy Story 3, How To Train Your Dragon and The Illusionist amongst its highlights, Tangled is right up and there and compares favourably with the best of them.

The magically long-haired Rapunzel has spent her entire life in a tower, but now that a runaway thief has stumbled upon her, she is about to discover the world for the first time, and who she really is.

Summary : An instant classic and perhaps a turning point for Disney's in-house animation studio. Tangled has many of the same qualities as the best Pixar films

Previous: 75% of Queensland flooded, declared disaster zone. Welcome to the Sunshine State!
Next: Seperated at Birth