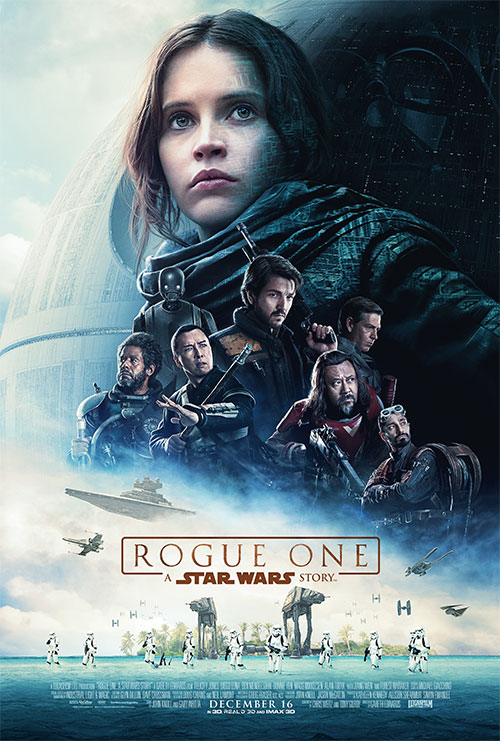 “It is a period of civil war. Rebel spaceships, striking from a hidden base, have won their first victory against the evil Galactic Empire. During the battle, Rebel spies managed to steal secret plans to the Empire’s ultimate weapon, the Death Star, an armored space station with enough power to destroy an entire planet. Pursued by the Empire’s sinister agents, Princess Leia races home aboard her starship, custodian of the stolen plans that can save her people and restore freedom to the galaxy…”

Rogue One: A Star Wars Story is the first of several planned Star Wars spin off films by Disney.  What makes it a spin-off?  Well it’s not quite worthy of being granted an episode number in the title or the famous yellow text title crawl you get with a mainline Star Wars film.  There’s no Finn, Rey or Kylo.  But plenty of other familiar Star Wars characters make an appearance.

These films can be considered snack-sized side stories that colour in some extra detail about the Star Wars universe.  The first of these spin-offs – Rogue One – tells the tale of how it was exactly that Princess Leia came into possessing the Death Star plans that we see in the opening scene of the original film back in 1978.

The story is centered around Jyn Erso (Felicity Jones), a young woman whose life has been terrorized by the Empire ever since she was a little girl.  Her father Galen Erso is a brilliant engineer who is kidnapped by the evil Director Krennic who forces him to build the first Death Star.  She goes into hiding but is eventually captured and imprisoned by the Empire.  The film begins in earnest when she is busted out of captivity by Rebel intelligence officer Cassian Andor (Diego Luna) who plans to use her to get to Galen and stop the construction of the Death Star.

Erso and Andor travel to the planet Jedha to visit the Rebel extremist Saw Gerrera (Forest Whitaker) who may hold the key to finding Galen Erso.  They are accompanied by the neurotic droid K-2SO and are also befriended in Jedha by the mercenary Baze Malbus and the blind spiritualist Chirrut Îmwe.  These misfits form the core of the ‘Rogue One’ group that will attempt to steal the Death Star plans and deliver them to the Rebel Alliance. 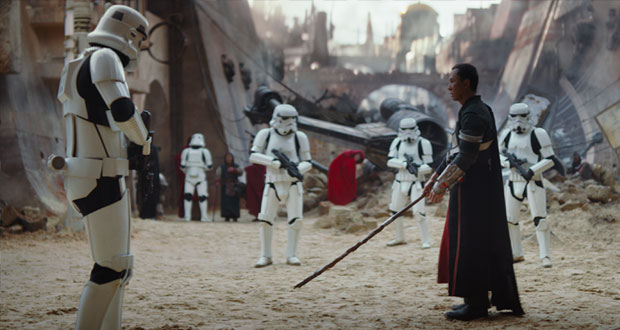 Rogue One: A Star Wars Story is a fine film.  Despite reports of a troubled production that included rumours of significant reshoots, I always felt that the project was in safe hands thanks to the involvement of Gary Whitta and Gareth Edwards, both of whom I think have proven credentials in understanding how to make a project like this shine.  In short, the film delivers on the best aspects of old and new Star Wars.

Edwards’ vision of the Star Wars universe is aesthetically consistent with the gritty and grimy look and feel of the Original Trilogy.  The film also leans further into the samurai theatrics of Yojimbo and Hidden Fortress that originally inspired Lucas when creating the Jedi, with the character of Chirrut Imwe being the most overt facsimile of a ronin character to date in the Star Wars universe.

Where Rogue One shares a resemblance to its modern Star Wars counterpart The Force Awakens is with the diversity of its cast.  The band in Rogue One are lead by the fearless Jyn Erso, played by Felicity Jones and her cadre of rebels which include the first major roles for both Asian and Mexican actors in the Star Wars universe.  Given the rather ugly racial caricatures that have reared their heads in the Prequel Trilogy, its pleasing to see Rogue One continuing the good work from The Force Awakens by having a more ecclectic and adventurous approach to casting.  And not for nothing, there isn’t a sense of tokenism about the parts played by Donnie Yen, Wen Jiang and Diego Luna either.  They are arguably the most colourful and interesting characters in the ensemble.

In fact, if there is any nitpick or gripe I would have with Rogue One, it is that Felicity Jones isn’t given a whole lot to work when it comes to the character of Jyn Erso.  Jyn is brave, soft spoken and beyond that, I’m struggling for words to describe her personality.  In a universe that includes such formidable and fun characters such as Princess Leia and Rey, it’s disappointing that Jyn remains so straight laced and one dimensional.

Speaking of characters, Rogue One does employ the use of several famous face from the Original Trilogy and in one instance, uses computer rendering to recreate a character whose original actor passed away over twenty years ago.  In limited uses, I’m not against this sort of thing and the presence of this person in Rogue One made sense within the context of the story.  Having said that, I would hope that the CGI recreation of deceased actors, no matter how impressive the technology, is something that the creative minds at Disney use with a lot of restraint. 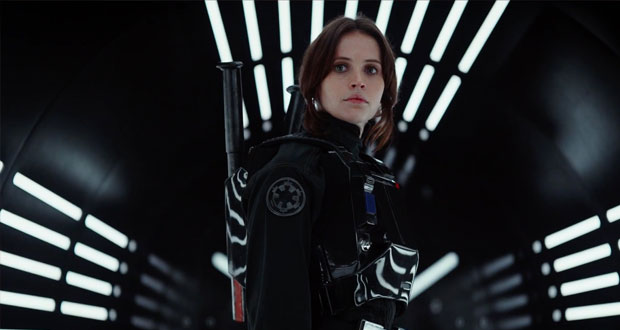 I think there is universal agreement that Rogue One‘s best moments arrive in its third act.  The Original Trilogy had three very distinct landscapes for each film – desert, snow, forest – and Rogue One has a clear visual identity of its own.  The battle on the tropical sun-soaked planet surface of Scarif is eye catching and enthralling fare.  It’s uncharted terrain for the Star Wars franchise and there is definitely something novel and appealing about seeing Storm Troopers and AT-ATs going to war against the backdrop of palm trees, sand and blue skies.

Tonally, Rogue One is one of the darkest chapters in the Star Wars pantheon and perhaps its fitting that the Rogue One rebels have a samurai in their numbers because there is plenty of sacrifice in the final moments of the film.

It’s been interesting to note that since Disney took over the Star Wars franchise from George Lucas, they haven’t really acknowledged anything from the much maligned Prequel Trilogy.  While it would be poor form and disrespectful to George Lucas to dump them from the Star Wars canon entirely, I half wonder if these spin off projects, Rogue One and the upcoming Han Solo film etc, which are set before the Original Trilogy is Disney’s own way of creating their own prequel universe.  After all, who wouldn’t prefer a “long time ago in a galaxy far, far away” that was inhabited with the likes of Baze Malbus and Chirrut Imwe instead of Jar Jar Binks and Watto?

The Rebel Alliance makes a risky move to steal the plans for the Death Star, setting up the epic saga to follow.

Summary : The first of the Star Wars spin-off films is much better than expected. If this is Disney's way of going about making their own prequels, I'm all for it.