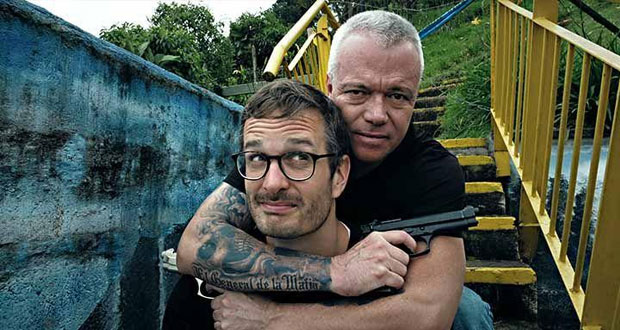 Let’s just get it out the way.  Yes, at first glance the similarities between Kiwi documentary maker David Farrier and Louis Theroux are impossible to ignore.  Not only does he look similar to Louis, he also has the same disarming interviewing technique and chose the same style of show, exploring unusual sub-cultures.

Two things.  Firstly, Farrier is obviously well aware of the comparisons and I admire the balls of his editing team to include a line from one of his interviewees who calls David a third rate Louis Theroux imposter.  Secondly, I think Farrier is a decent film maker and if anyone doubts his credentials, they should check out Tickled (currently on Netflix) which is a way more interesting documentary about ‘competitive endurance tickling’ than it has any right to be.

Dark Tourist is an eight episode series that takes Farrier around the world to explore unusual tourist destinations and experiences.  He travels everywhere from Europe, North America, South America and perhaps most interestingly, to autocrat ruled Turkmenistan, in one of the most fascinating episodes in the series (its titled The Stans).

There isn’t much that thematically ties each episode together.  You get a mish mash of places that dabble in voodooism and spirituality, people that fetishize cult figures like Pablo Escobar and Charles Manson, and remote parts of the world usually ruled by some sort of dictator.

The format of the show usually covers three distinct destinations each episode so generally Farrier is spending about 15-20 minutes apiece on each location/subject matter before moving on.  Going back to the Louis Theroux comparison, it reminds me of his earlier Weird Weekends shows compared to the more serious and in-depth stuff he does now.

You can watch the episodes in any order so just pick a subject that interests you.  For me, I’d recommend “The Stans”, “Japan” and “Back in the USA”.