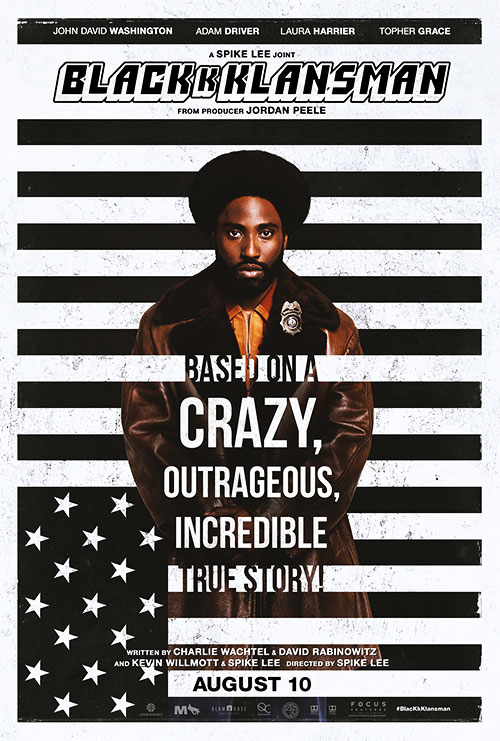 There was once a black guy who was a member of the KKK.  True story.

His name was Ron Stallworth.  He was the first black police officer in the Colorado Springs police department.  Stallworth (played by John David Washington) worked in the intelligence division and he began to do undercover work on the KKK and incredibly, he managed to infiltrate their organization by posing as a caucasian extremist on the phone, and then sending in his Jewish college Flip Zimmerman (Adam Driver) in his place for face to face meetings.

This bizarre but true story has been adapted by Spike Lee into BlackKklansman, one of the film industry’s first great polemics about the Trump administration and the roots of his populist movement. 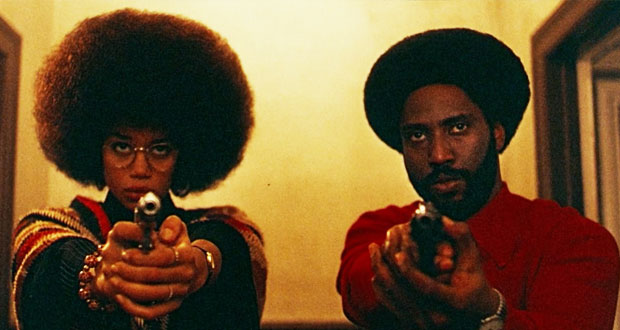 BlackKklansman is an exceptional piece of film making and a real return to form for Spike Lee.  It is a particularly well rounded tale that works effectively as a crime drama, a Seventies blaxploitation homage and a dark comedy all at once.  The subject matter at the heart of the film -white resentment – is politically charged and highly topical, but Lee successfully walks a tightrope juxtaposing scenes that delve into the intense hatred of the klansman with moments of light and levity as Stallworth and his allies work to infiltrate their organization.

It’s interesting to note that some of the most cutting moments that capture the darkness of the white supremacists in this film are communicated to the audience through speeches and not actual scenes of violence.  There is a moment in the film that jumps between the klansman watching Birth of a Nation and an African American elder talking about the lynching of a young black boy that I found both chilling and particularly memorable.

BlackKklansman is a film that serves as a commentary about the current political landscape in America and to that end, I think some of the film’s most disturbing characters aren’t the leaders of the klan, but the foot soldiers and the every day racists that do their bidding.  In particular, there is a married couple involved with the klan, Felix and his wife Connie, who outwardly have the appearance of cheerful, domesticated suburbanites, but they hold some of the darkest views of anyone in the film and volunteer themselves as terrorists to murder black folk.

BlackKklansman deals with some heavy subject matter but for most of the film, it is a surprisingly light-footed watch.  As I said, there aren’t scenes of graphic violence and although we see some ugly racism, it is definitely offset by a comedic undercurrent.

The film sort of lulls the audience into a false sense of security.  There is a false ending that is uplifting and has a feeling of All’s Well, That Ends Well about it.  The good guys won and the klansman were foiled.  You feel pretty good.

That is until the actual final scene of the film where Lee dispenses with the analogies and draws a direct through-line between the events of the film and the Donald Trump presidency.  Lee uses real life footage of the Unite the Right rally in Charlottesville including footage of Heather Heyer’s final moments before she is mowed down by a white supremacist in a car.  It is an absolutely horrifying conclusion to the film and as we watch the former KKK leader David Duke endorse Trump and rewatch Trump’s infamous ‘fine people on both sides’ speech, it lays bear the awful truth about the current president of the United States and the people he represents.  They didn’t go anywhere.  They merely lay dormant and bid their time.

Ron Stallworth, an African-American police officer from Colorado, successfully manages to infiltrate the local Ku Klux Klan with the help of a white surrogate.

Summary : An incredible true story that is both told effectively and serves as a powerful polemic against the current administration. BlackKklansman is one of Spike Lee's greatest films. 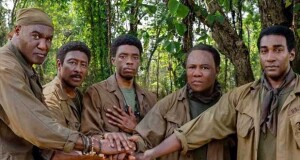