Don't Miss
Home > Blog > The Revolution Will Not Be Televised

The Revolution Will Not Be Televised 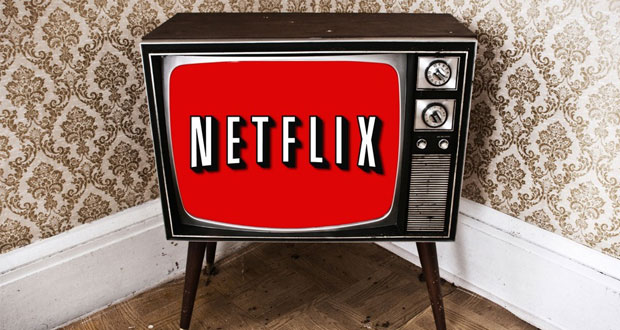 There’s something really weird that’s been happening lately in Australia.  Foxtel – the country’s dominant cable provider who I have had a subscription with for eight years – is suddenly being nice to me.  It started in October when they just dropped me a letter to say they were giving me ten extra channels for free.  No reason.  Just being nice.

Then they came up with some new plans.  Cheaper plans.  Like, thirty dollars a month cheaper.  Oh, and that thing where I only want to subscribe to Foxtel for the sports channels but they force me to pay for a bundled package with about fifty channels I don’t want?  They’re finally coming up with a stand alone sports package.  How about that!

It’s a jarring experience because as long as I can remember, Foxtel have behaved no differently to the cable companies from that one episode of South Park.  They seemed to pride themselves on outrageously shitty business practises and lousy service.  For the longest time, if you wanted the sports package you had to subscribe to a basic package and then pay extra for sport.  What’s that?  You want your football in HD?  Well, that’s a premium.  An extra $20 on top again.  Basically, for the longest time, if you wanted to watch HD sports in Australia, you had to pay Foxtel roughly $80 bucks a month because fuck you, that’s why.  You get to call the shots when you’re the only game in town. 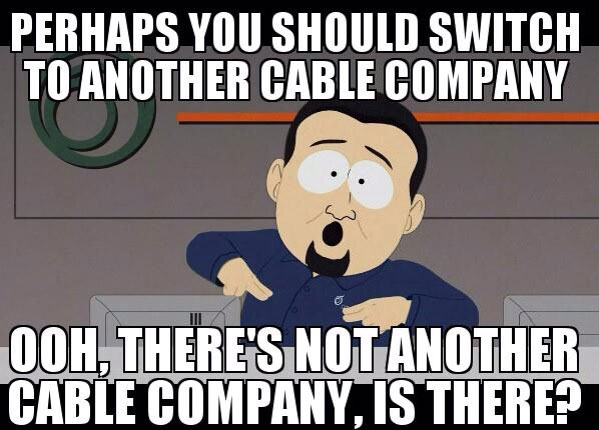 Free to air television is no better.  It is a cultural wasteland in Australia that is losing viewers in droves.  Nothing seems more antiquated in 2015 than sitting down and watching FTA channels that literally talk to the viewer as though they were emotionally stunted simpletons.  All the ads are about gambling and alcohol.  The teasers for the latest reality shows always lead in with footage of contestants crying with the same tired promise of cliff-hanger endings and shock revelations.  Trashy current affair programs still drone on about dodgy tradesmen, fad diets and celebrity gossip.  All of this coverage is presented with the same nuance as a penis enlargement spam email.  Five minutes of FTA television is usually more than enough to make me reach for the remote.  It’s programming thats scarily similar to Idiocracy.

So people download shows instead.  They do it in Australia by the hundreds of thousands.  Our country is the number one illegal downloader of Game of Thrones in the world because it isn’t legally possible to watch it for less than $30 a season.  And just like illegal music services paved the way for legal enterprises like Spotify, television is finally getting the streaming video-on-demand services that people have been crying out for in Australia for years.  Netflix finally arrives in Australia on March 31st.

Of course, many people in Australia have already been using Netflix for years thanks to GeoBlocking.  And they’ll tell you that Netflix is clearly the way of the future.  It might not always be the same company that dominates the VOD landscape but Netflix’s template has set the foundation for others to build upon.

It goes without saying that the primary appeal of a video on demand service is watching shows on your time, not someone elses.  But there are so many other benefits to Netflix which makes their paltry $9.99 monthly subscription fee worth while.  The service has zero ads.  Zero.  There’s no banner ads.  No sneaky commercial in between shows.  It has zero.

The breadth of films and shows they have is terrific.  Their algorithms for suggesting new shows you might like is generally on the money.  And in Australia, it actually provides a reasonable alternative to the plethora of shitty programming we get on tv here.  Netflix has a lot of content but they still exercise impressive quality control.  Just look at some of those recommendation categories:  ‘Critically acclaimed films’, ‘Top Rated British Crime Dramas’, ‘Mind-Bending Foreign Movies’.  That’s what I’m talking about.  I have no doubt that Rupert Murdoch’s media team will eventually create their own VOD service and I imagine the categories will probably be ‘Weight loss shows’, ‘Weeping Reality Show Contestants’ and ‘The Truth About Obama’.  I don’t think Netflix gets nearly enough praise for not peddling garbage on their network.

So what happens next?  When Netflix arrives and even more people cancel Foxtel and tune out from FTA what will happen to the likes of News Corp and Nine Entertainment?  Will they be forced to up their game and provide better content delivered in ways that are convenient and considerate to the customer?

Not likely.  My guess is that they’ll do what they did in the States – where the major media networks purposefully throttled the Internet speeds for people accessing Netflix, which ultimately lead to Netflix capitulating and having to pay out millions so their customers could access their service unhindered.

I expect you’ll see me post a ranting blog article about something similar happening in Australia.  I give it 12 months.