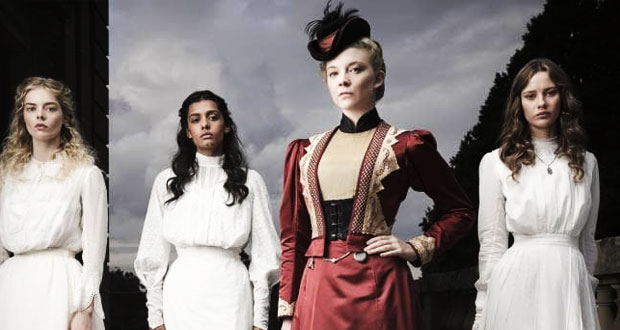 Picnic at Hanging Rock is an enduring Australia classic.  Originally a novel written by Joan Lindsay in 1967, it is perhaps most fondly remembered for Peter Weir’s cinematic adaptation of the same name.

You might think it a rather thankless task to do a new version of this tale but I don’t take for granted that Weir’s adaptation will be remembered indefinitely in Australian culture.  If Showcase’s adaptation gets more people to check out the novel and the film, I think that is no bad thing.

This particular adaptation is a six episode series.  Whilst it sticks pretty closely to the source material, there is enough time to flesh out the characters and explore more of what society was like in Victorian Australia at the turn of the 20th Century.

One of the first things you’ll notice about Picnic at Hanging Rock is what a lavish production it is.  It looks like no expense was spared with the intricate costumes and ornate set design.  The show was also shot on location in regional Victoria and provides a stunning backdrop.

Going against type, Natalie Dormer is cast as Mrs Appleyard in what proves to be an interesting and ultimately satisfying choice.  There is also a number of talented young Aussies who are given an opportunity to shine in the series as the students attending Appleyard College.  Highlights for me included Lilly Sullivan as Miranda and Samara Weaving as Irma.

Although the series occasionally teases a particular cause for the events that take place, it wisely never takes the plunge and fully lays out a definitive explanation.  That ambiguity is at the heart of what makes Picnic at Hanging Rock such an enigma and gives it its enduring mystique.