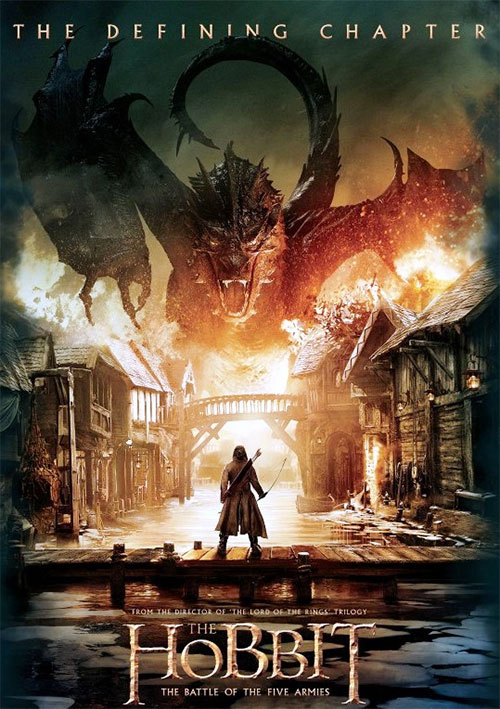 “So began a battle that none had expected; and it was called The Battle of the Five Armies, and it was very terrible.”
-J.R.R. Tolkien, “The Hobbit”

Here’s the equation: In JRR Tolkien’s The Hobbit, the ‘terrible battle’ is described in a single chapter that spans less than ten pages.  The Battle of Five Armies is a 144 minute film.

The final instalment of The Hobbit trilogy is a strange and curious proposition – how do you turn a single chapter of a children’s book into a sweeping fantasy epic?  All of the previous Tolkien adaptations involve Jackson taking a dense work of literature and condensing it into a film that has pace, clarity and vision.  With The Battle of The Five Armies, the opposite holds true.  This is effectively Peter Jackson’s own story that is set in Middle Earth and he has a yawning chasm of screen time to fill using a minuscule passage of text as source material.  The other Middle Earth films have been literary adaptations.  This is something closer to fan fiction.  The characters and the environments are creations of JRR Tolkien but what happens to them in this film are almost entirely drawn from the imagination of Peter Jackson, Fran Walsh and Philippa Boyens. 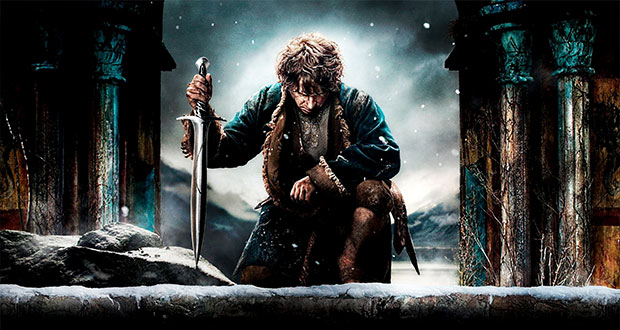 We pick up immediately after the final moments of The Desolation of Smaug with the dragon laying waste to Lake Town in a thrilling opening act.  Benedict Cumberbatch is all snarls, spit and venom as the voice of Smaug.  His reign of terror is brought to an end by the bravery of Bard, played by Luke Evans, who fires a single (albeit enourmous) black arrow into the heart of the beast.  The death of Smaug does nothing to bring peace to the people of Dale however.  News travels fast around Middle Earth and suddenly the race is on to claim the vast treasures in The Lonely Mountain.

First to arrive and secure the mountain is Thorin Oakenshield and The Company of dwarves.  Thorin is thrilled to recover the riches of his ancestors but his pleasure is short lived as he becomes consumed with what Tolkien coined ‘dragon-sickness’. The dwarf king becomes obsessed with finding the Arkenstone, a precious gem that he covets but is nowhere to be found in the mountain halls.  Thematically, this is very much a precursor to the One Ring from The Lord of the Rings and the two films are clearly interlinked with their morality tales about the corrupting influence of wealth and power.  Ironically, it is Bilbo that first sees the damaging influence that the Arkenstone has on Thorin.

Converging on The Lonely Mountain are the people of Laketown, lead by Bard, hoping to reclaim what was promised to them by Thorin so they can rebuild their city.  The elves are not far behind, seeking precious gemstones that they once gave as an offering to the dwarves.  There is also the return of Azog the Defiler and his army of orcs – the first signs of the darkness and resurgent power that is brewing in Mordor.  When diplomatic talks between Thorin, Bard and the elven king Thranduin fail, the stage is set for an almighty conflict.

The Battle of Five Armies is a film that highlights the very best and worst of Peter Jackson’s modern work.  At his best, he is able to put together some of the most riveting and captivating war scenes of any director than I can recall.  He is able to tell stories with his battles, where the audience understands the strengths and weaknesses of each side, the strategies they are using and the ebb and flow of the conflict.  He intersperses the footage of thousands of warriors in conflict with short 30 second snippets of single handed combat.  These small segments almost always showcase the incredible flair and finesse of a key character and will typically leave the audience thinking ‘how on Earth can they stop that guy?!’ only for a bigger, badder, even more formidable foe to take centre stage.  In fact, its a recurring motif throughout the film.  An underdog and a powerful adversary square one another up and appear ready to do battle.  Then a new challenger arrives at the last moment, tipping the scales in favour of the underdog.

Jackson also has a fine cast of heroes at his disposal although he is less successful in giving them the time and breathing room that they need to fully flesh out their characters and story arcs.  Too often we miss the presence of Martin Freeman as Bilbo Baggins, the plucky little homebody that should be the focal point of the proceedings.  He sometimes goes missing for ten to fifteen minutes and we miss his presence.  Luke Evans and Richard Armitage are both excellent in their respective roles as Bard and Thorin but again, neither really quite hit the same emotionally resonant highs that the audiences shared with Aragorn in The Lord of the Rings.  They both have journeys of great peril with feats of heroism but The Battle of Five Armies is so densely packed with subplots that they get lost in the shuffle too.  In retrospect we probably could have ditched the stories with Legolas, Saruman and Radaghast (none of which are in the original text) to give more time to the afore mentioned heroes. 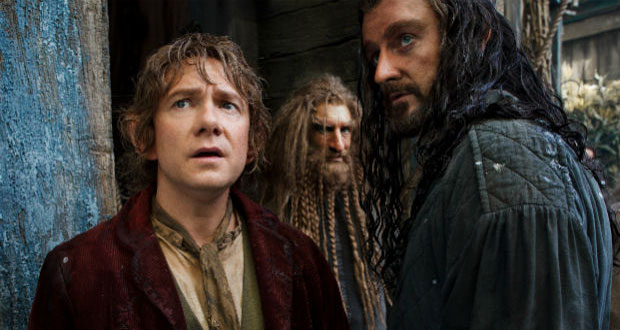 Peter Jackson is at his worst is when he and the talented team at Weta Workshop, capable of producing some of the most incredible special effects in Hollywood (see: Dawn of the Planet of the Apes), inexplicably churn out some of the worst, suspension-of-disbelief-shattering, shitty CGI effects this side of The Scorpion King.  For some reason, it almost always involves Legolas.  Before seeing the film, I had heard the gripes and groans from some people lucky enough to see the sneak previews that mentioned that The Battle of Five Armies is a bad offender in this regard.  But then I watched the film and found myself pleasantly surprised at the quality of the special effects.  There was nothing egregious or particularly off putting.  Sadly, it didn’t last.  In the final climactic battle sequence of Peter Jackson’s final Middle Earth film with the highest stakes and with all the marbles on the line, there is a truly dismal fight sequence involving (who else?) Legolas in which he does some ridiculous flippity floppity nonsense which involving knocking down towers to turn them into bridges, ‘surfing’ along mountainside terrain, jumping on falling platforms like he was Super Mario and finishing with a pro wrestling move to take down an enourmous villain with the power of his inner thighs.  It is just awful and I want to pretend it never happened.

At the end of the story, The Battle of Five Armies comes full circle with start of The Fellowship of the Ring and ends at Bag End with two old friends greeting one another.  It’s a bitter sweet send off and the last time we’ll see the cast of characters from Peter Jackson’s Middle Earth.

Looking back at The Hobbit films, its easy to see they’re rougher around the edges than The Lord of the Rings trilogy.  The Company doesn’t hold a candle to the greatness of The Fellowship.  Azog is intimidating but he’s no Sauron.  The Battle of Five Armies is entertaining but its not as perfectly constructed as The Battle for Helm’s Deep.  Its tough for The Hobbit films that they are invariably compared to the greatest fantasy films ever created and of course, they come up short.

But I still enjoyed myself.  I’m still happy The Hobbit was made, third film and all.  Sure they plodded and heaved at times but the little moments of magic made it worthwhile for me.  Biblo and Gollum exchanging riddles for the ring.  Bard saving Lake Town from Smaug.  The chance to see Ian McKellan as Gandalf one last time.  I love the fantasy film genre but few films come anywhere near the spectacle of Peter Jackson’s Middle Earth films.  The Hobbit didn’t reach the heights of The Lord of the Rings but it was still a damn sight greater than The Golden Compass, the Narnia films, Eragon, or just about any other pretender to the throne in the last decade.  I’m thankful to Peter Jackson and his team for pouring their heart and soul into these films for the better part of two decades.  I suspect we won’t see anything rival the scale, spectacle or quality of these films in the fantasy genre for many, many years.

Summary : The Battle of Five Armies won't change the minds of The Hobbit detractors but this is still a fine swan song for fans who want to revisit Middle Earth one last time

Tagged with: JRR Tolkien Lord of the Rings Peter Jackson The Hobbit

Previous: The Muppets Most Wanted
Next: Chef