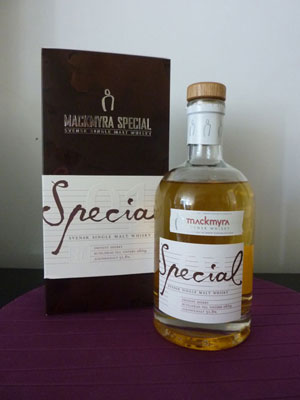 PALATE Spicy, earthy taste with a lash of peat.  Quite a full bodied flavour.

FINISH Perhaps showing its relative immaturity, it trails off quickly with a lingering wood fire finish.

NOTES Now this is a great story.  Eight friends who went to university together at the Royal Institute of Technology in Stockholm decided to take their love of malt whisky a step further than most by creating their own distillery.  They started out this venture in 1999 and are just now reaping the fruits of their labour.  Mackmyra mades its international debut just three short years ago and since then, its been slowly getting more and more recognition from the international community.

Although this particular edition is made from a re-used sherry cask, the majority of their whisky is now stored in Swedish Oak.

I recently had a friend and his fiancee come over for dinner and drinks one night.  After we finished the duck raspberry course we got stuck into the whisky cabinet.  My friend who is not a whisky drinker by nature, sampled a couple of different single malts and thought them alright but was honest enough to admit he didn’t really see what the fuss was all about.  However, after sampling a drop of the Mackmyra 01, he lit up and it seemed to really click with him.  Now either the previous rounds of Highland whiskys were starting to take their toll on him or maybe these Swedish fellas might be onto something.

I’ve also really enjoyed having a few drams from this bottle myself but now I’m becoming a bit stingy with serving up any more because I don’t really know how easily I’ll get a chance to find another bottle.  It’s a lovely drop and a remarkable achievement for such a young whisky.

Previous: Dog ate my method for getting into work
Next: X-Men: First Class