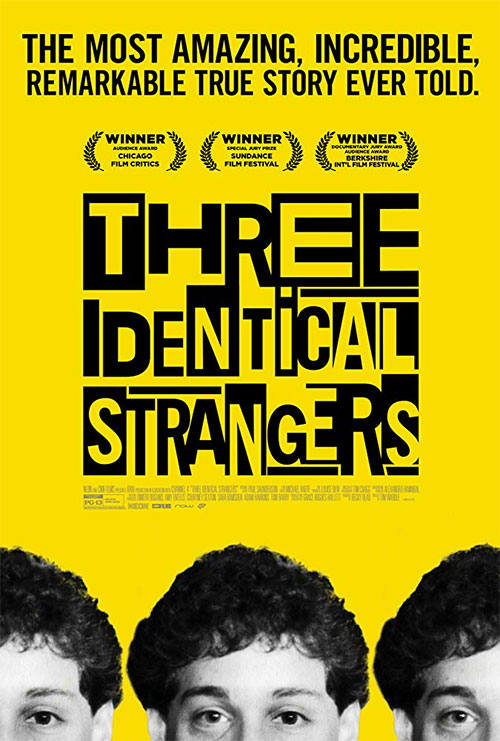 In the summer of 1980, freshman Bobby Shafran goes to college on his first day only to find that everyone is familiar with him.  They greet him with smiles, hugs and hellos.  This confuses Bobby as he doesn’t know any of these people and it’s literally his first day there.  Eventually someone greets him as Eddy.  He corrects them and explains that his name is Bobby.  They insist he’s Eddy.  The exchange goes back and forth until Bobby determines that someone attending this college is his exact double.  When Bobby and Eddy meet, it is a revelation.  Both are adopted.  They realise that they have been separated at birth and by a stroke of incredible luck, they have been reunited.

The story makes the news.  It’s one of those human interest stories that, in the days before the Internet, is enough to propel them to fame for a number of weeks.  They do interviews on morning shows and have an article written up about them in all the major papers.  That’s where someone else reads about Bobby and Eddy and remarks how much they look like David.  David Kellman is the same age as Bobby and Eddy, also adopted, and when he too notices the incredible resemblance, he reaches out to them.  They’re triplets.  Triplets separated at birth to adopting parents unfamiliar with their siblings, reunited nineteen years later in incredible circumstances.

Although the story beggars belief, it turns out Three Identical Strangers is only just getting started. 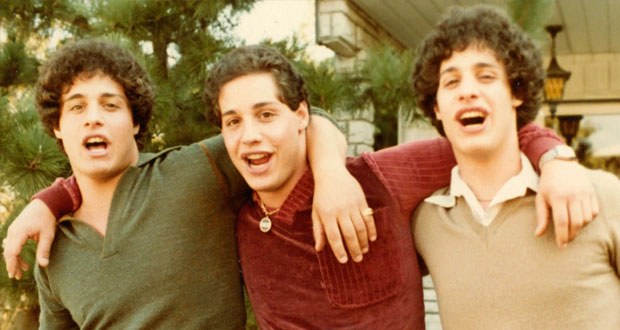 To go into Three Identical Strangers knowing as little as possible is the best way to experience this film.  The miraculous tale of how the three were reunited is fascinating but truth be told, it still sounds like the type of story that could be encapsulated in an evening news segment and that would just about cover it.

What makes this documentary so damn fascinating is that the story of the triplets getting reunited is just the beginning.  Director Tim Wardle steers the film down a path that explores the idea of nature versus nurture.  The triplets have been apart their entire lives up to that point, grew up with parents in three different socio-economic backgrounds, and yet they shared an uncanny number of similarities.  What makes a man? the film asks.  That these three could grow up in such different circumstances and yet be so similar in their interests and their personalities.

We learn what the triplets did in the immediate aftermath of their sudden fame.  Basically, they cashed in.  They opened a themed restaurant in New York and partied at Club 54 with socialites.  They grew up, they got married, had kids and…that’s when the film asks another question that completely flips the story on its head.  Why did this happen?  How could triplets be separated without their adoptive parents being told.  Who was their mother?  What is going on here?

And that’s where the film really goes some places I didn’t expect.  You should know that there isn’t any ambiguity about this story.  Three Identical Strangers definitively answers why the triplets were separated and who arranged it.  The answers are quite astonishing.  The documentary then doubles back on exploring the triplets themselves.  What makes them who they are.  Superficially they had some common interests but what are they like as individuals?

Three Identical Strangers is an incredible documentary.  It starts as a human interest story.  It asks questions about our childhoods and what makes us who we are.  Then it unravels an incredible mystery that is at the heart of what happened to these three young men that had me shaking my head in utter disbelief.

There’s a sadness and darkness at the heart of this story.  Ultimately, it’s a story about trauma, mental health and parenthood.  I can’t imagine what it must have been like to be any of these three men.  The circumstances around their lives are truly bizarre.  Sometimes truth really is stranger than fiction.

In 1980 New York, three young men who were all adopted meet each other and find out they’re triplets who were separated at birth. Then they discover why.

Summary : What starts off as a sensational true story, turns out to be something bigger and even more thought provoking. A powerful documentary.

Previous: Eighth Grade
Next: Sorry To Bother You