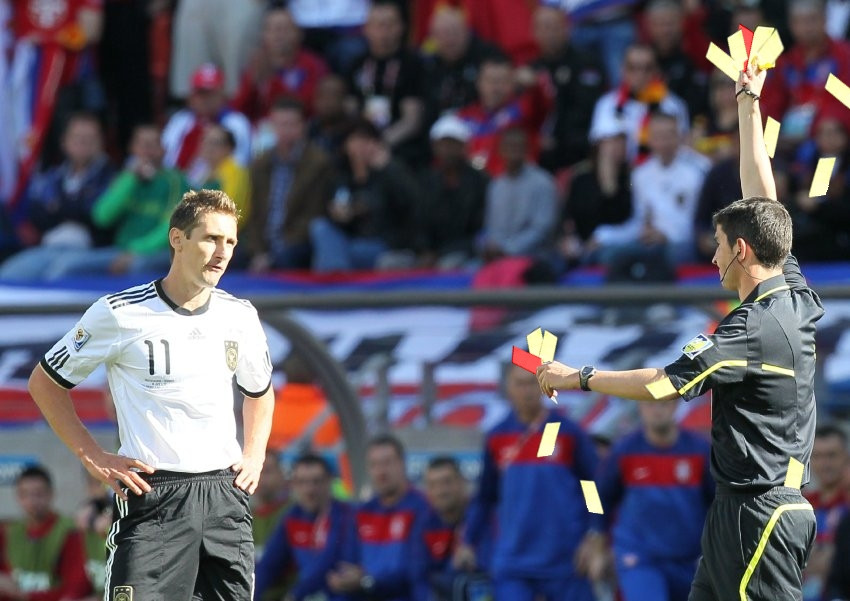 World Cup 2010: Too many goddamn cards

“JOHANNESBURG, June 29 (Xinhua) — FIFA President Sepp Blatter expressed his apology on Tuesday to England and Mexico for the referee errors, which helped to cause the exit of the two teams in the South Africa World Cup.” – Source

“FIFA will discuss the introduction of goal-line technology at a meeting in July, Sepp Blatter, president of soccer’s world governing body, has announced.” – Source

My memory fails me.  I certainly remember plenty of shitty refereeing decisions in past World Cups but I’m not sure I remember this level of backlash from the viewing public.  Usually, I think you get pretty even representation between ‘we wuz robbed, bring on the video technology’ and ‘it kills the flow of the game’.

I think one thing everyone can agree on is that at this World Cup the referees have played a major hand in determining the outcome of plenty of matches.  Whether they are disallowing perfectly good goals, allowing offside goals, red carding people for no good reason or generally killing the flow of the game by enthusiastically blowing on the whistle like it was a vuvuzela, there’s no escaping how much they’ve shaped the outcome of the matches. 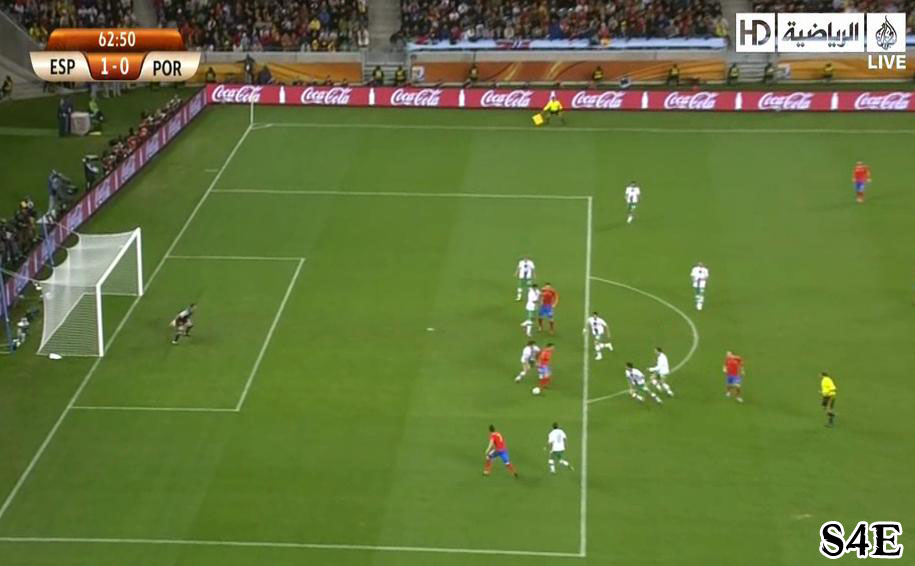 It’s gotten bad enough that FIFA President and world class douchebag Sepp Blatter has had to step in and make some vague promises to ‘look into things’ after this tournament has concluded.  Big deal.  He did the same thing after the Thierry Henry incident and that amounted to squat.

Personally, I’m all for bringing in sweeping changes into football.  I’ve got more than a few gripes that I don’t think I’ve really seen answered.

Why the hell isn’t the referee obliged to explain his decisions? When Koman Coulibaly disallowed the United States’ goal against Slovenia, the most messed up thing about the call was that Coulibay never explained why it was disallowed.  I mean its one thing to mess up an offside decision or misjudge a well-timed dive but why do refs have the power to disallow a goal with no reasoning?
Change #1:  The ref should have to explain what the hell he’s doing.  Hook him up with a mic like they do in rugby so we can all hear the call.

Why does it have to be a Referee’s World Cup? It’s a World Cup so we get some of the best footballing nations represented from around the world.  I don’t understand why this thinking extends beyond the players to the referees.  There seems to be a greater emphasis on getting referees from an assortment of countries and continents instead of simply focusing on getting the most experienced refs who have a track record of not fucking up all the time.

FIFA’s Referees’ Committee selected 29 referees through its Refereeing Assistance Programme to officiate at the World Cup: four from the AFC, three from the CAF, six from CONMEBOL, four from CONCACAF, two from the OFC and ten from UEFA. – Wiki

Change #2:  Seriously, just pick good refs.  You’re probably passing on perfectly good experienced refs from Europe and South America when you have to make room for dudes from the smaller footballing regions.

Why aren’t there post-match reviews? There’s plenty of talk about video technology for during the games but why aren’t there ever any repurcussions post-match?  Even if we go with the ‘kills the flow of the game’ argument and decide not to use the technology during the games, why not take incidents like Rivaldo’s performance at the 2002 World Cup and then suspend him for a bunch of matches and fine the team while you’re at it?  That’ll help curb that kind of behaviour quick enough.
Change #3:  Use ‘VCR’ video technology to rewind the footage of the match and then punish the shit out of people taking the piss

Use every friggin’ bit of technology at your disposal. Seriously, use hawkeye, use video replays, the lot.  Have a fourth official who watches the game unfold and have him interject where appropriate.  If its good enough for cricket, rugby, league, tennis, NFL and probably a bunch of other sports, its good enough for football.  Its pretty hollow to keeping promoting ‘fair play’ in football and then basically turn a blind eye to all the dodgy shit that goes on on the field.  We’d be fine if the world had more football players like Robbie Fowler who decline penalties awarded to them incorrectly but instead we have a world full of assholes like the German keeper who bragged about tricking the referee in the game against England.
Change #4:  Use video technology, hawkeye, seven goal-line refs and a post-match review system.  Basically, assume the referee is utterly incompetent and has been trained by Earl Hebner.

Previous: World Cup 2010: [too sleepy to watch] The Netherlands vs Slovakia
Next: Dinner plans