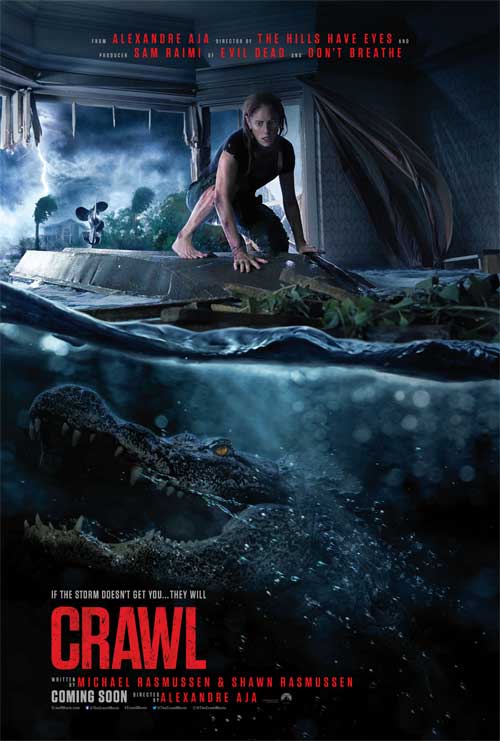 I love a good gator movie.  They’re one of my favourite subsets of the monster movie genre.  Rogue, Lake Placid, Alligator (R.I.P Robert Forster), you name it, I’m there.

Crawl is a fine new addition to the gator horror pantheon.  It’s short, sharp and brutish.  At 87 minutes, it’s not going to be impolite and take time out of your day.

Haley Keller is a University of Florida student who excels at swimming (handy).  She is warned that a Category Five hurricane is bearing down on the State and there are orders to evacuate.  Haley gets concerned when she can’t reach her father Dave and after a quick detour to his house which is empty, she eventually finds him at the old family home in Coral Lake.  Only Dave is unconscious and near death as he’s been attacked by some ferocious alligators that have arrived via an open storm drain.

That’s the set up.  And that’s pretty much your movie. 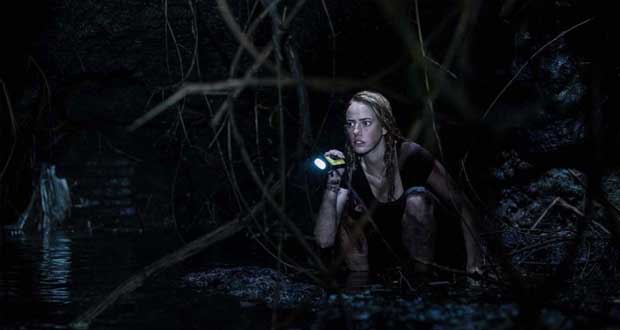 All bets are off in Crawl because there’s only really two characters in the movie – the dad who has been mauled to bits before you even meet him and Haley who unexpectedly gets chomped on by an alligator maybe 20 minutes into the film.  That’s how tense and dire the situation is and it doesn’t really relent from there.

In a movie of this kind you generally don’t have the luxury of spending too much time on characterisation so its great when you have actors like Kaya Scodelario (Skins) and Barry Pepper (too many legendary performances to list) who are inherently likeable and can communicate plenty with body language and a few words here and there.

There is the occasional side character who gets introduced – hapless police officer, hapless looter etc. – but none of them last more than a couple of minutes before being pulled apart by the gators who are also uniformly excellent with their performance.

I like the lean and economical way Alexandre Aja has shot and constructed this film.  There are only a couple of locations.  There’s nothing superhuman about the gators.  We just understand that they are naturally lethal creatures in the water and Aja gives great clarity to the audience what Haley and Dave need to do to escape from them.  The thrill is watching the execution of their game plan and biting your fingernails when it goes predictably pear-shaped.

Crawl is an excellent, well put together survival horror.  Enjoy!

A young woman, while attempting to save her father during a category 5 hurricane, finds herself trapped in a flooding house and must fight for her life against alligators.

Summary : A short and savage creature feature that kept me entertained from start to finish.