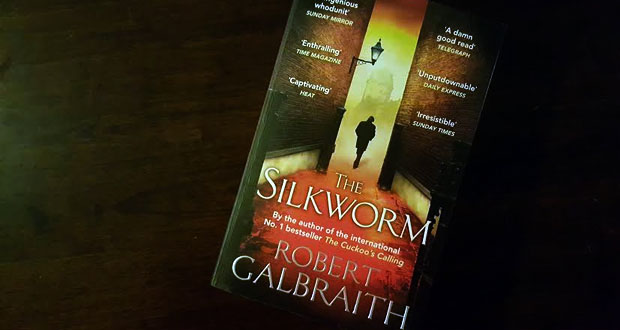 ‘Someone bloody famous,” said the horse voice on the end of the line, “better’ve died Strike.’

The Silkworm is the second chapter in Robert Galbraith’s Cormoran Strike detective series.

Following on from the events of the first book, Strike now has a measure of fame and notoriety in the public after solving the murder of celebrity model Lula Landry.  He enjoys a slightly improved sense of financial stability which affords him the opportunity to retain the services of Robin Ellacott, who worked throughout most of The Cuckoo’s Calling as Strike’s temporary secretary.  In her new full time capacity as Strike’s partner she begins to learn from the grizzled veteran and becomes a private detective in training, much to the chagrin of her fiancee Matthew.

In The Silkworm, Cormoran Strike is approached by the wife of the famous author Owen Quine who has been missing for a fortnight.  After some investigating, Strike discovers Quines body in an abandoned apartment.  Stranger still, Quine has been murdered in the exact fashion that he described in his manuscript for Bombyx Mori – his latest novel which had the literary scene in an uproar as the early drafts features thinly veiled metaphors for real life people (rival authors, publishers, editors) which placed them in grotesque scenarios involving torture, rape, necrophilia and cannibalism. 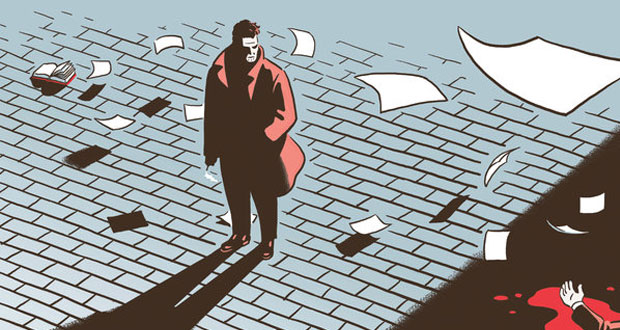 As you might have guessed with that last sentence, The Silkworm is JK Rowling’s nastiest and grittiest work that I have ever known her to write.  Perhaps its no coincidence that she’s saved some of her most graphic content for a story about authors and the publishing industry.  Reading The Silkworm made me wonder if the audience is supposed to be able to drawn their own parallels between the characters like the repugnant Michael Fancourt and the alcoholic editor Jerry Waldegrave with people that Rowling has crossed paths with in her own journey towards becoming a published author.

Drawing a direct comparison with the first book, I must admit that the murder mystery in The Silkworm didn’t grab me quite as successfully as the Lula Landry murder in The Cuckoo’s Calling.  However, what I did like about The Silkworm was the development of the characters – particularly Robin – who begins to hone her skills as a detective in her own right.  One of the most thrilling and enjoyable aspects of the Harry Potter series is how the relationship dynamics between Hermione and Ron change and how the meek and mild mannered Neville Longbottom develops into a hero by the seventh book.  I’d happily see the Cormoran Strike story develop into a full fledged series of books if it means we get to see Robin transform into a great detective and we see an evolution of her relationship with Strike, how she juggles her work and personal life and how far she can develop.

I assume Rowling has been enjoying spending time with these characters as she has been publishing these books at a rate of one a year since they started in 2013.  I’m happy to see where the story goes so I’ll be picking up Career of Evil, the third instalment in the series which was first published just a couple of months ago.

Previous: A Wagyu Tasting Night At Cha Cha Char
Next: Star Wars Episode VI – The Return of the Jedi [1983]