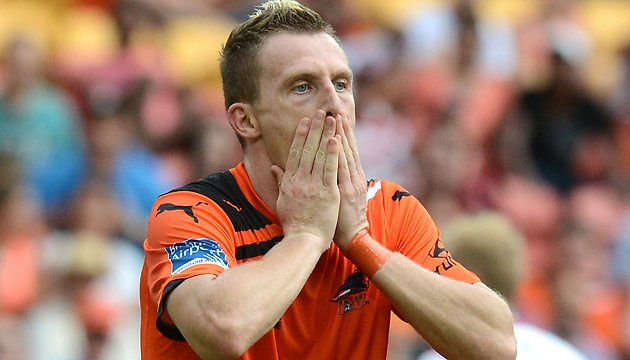 It’s not quite as bad as how things are in Wellington, but its pretty close.  Brisbane Roar lost over the weekend to Western Sydney Wanderers in what I believe is the first game in over two seasons where we scored first and came away with no points.

It was a much improved performance from last week’s match against the Jets but I think we’d have to start tracking a negative amount of shots on goal to do any worse.  To be fair, for about an hour, the team looked like the Brisbane Roar of old.  It was only when they switched off for a spell did Western Sydney Wanderers run rampant and score two goals in quick succession.  The first goal was probably the worse of the two.  We sat ridiculously deep in defence and Mark Bridge was able to fire off a shot with acres of space at the edge of the penalty area.  Our defensive woes can’t be patched up soon enough.  The second goal simply summed up the year we’ve had.  The team presumed the Wanderers to be offside when they fired a long ball down the flanks.  Unchallenged, Yusuf Hersey dribbled the ball into the box and scored from a metre out.

What I did see in the game was a glimpse of how we’d dig ourselves out of the hole we’re in.  The hope lies with the young players.  One of our biggest problems this season has been experienced players being out of form but still getting a full 90 minutes, week in, week out.  There was no competition for places and with most of the squad signed to long term contracts, it created a bad team environment.  This game saw Mathew Donachie, Corey Brown, Julius Day, George Lambadaridis and Luke Bratten all get significant game time.  You could tell they were hungry for their spots.  Hopefully, coach Mike Mulvey will continue to give them a go and the foundations for the next championship winning side can begin to be built.

Spare a thought for Wellington Phoenix.  The season started out with such promise but they’ve hit rock bottom – a 7-1 spanking at the hands of Sydney FC which included a first half hattrick for Alessandro Del Piero.  He finished on four goals at the end of the game.

The sentiment from the supporters on Twitter (and from my brother who comments here) lays the blame squarely at the feet of the administrators for trying to force a style of play that doesn’t suit the team.  It’s still not too late to make a break for that sixth finals spot but the recovery will need to start as soon as their next game.

As for Del Piero, although Sydney have had a pretty crappy season, he must be enjoying life in Sydney and at the club.  He has signed on to stay for another season.