The Beefer shows his support for the Roar

Retired England cricketer Ian Botham turned up at Suncorp to show his support for the Brisbane Roar on Saturday.

This week we had a local derby against the underwhelming North Queensland Fury.  It’s only the Fury’s second season in the A-League.  In their opening season they signed up God to play as their striker.  He worked out pretty well for them scoring a handful of goals for the club but then he left at the end of the season to join the Perth Glory.  Since then, the Fury have found it tough going this season and have been sitting in the bottom three for the past few months.

I’m not a supersticious person by nature but I was concerned that despite this game looking like a pretty likely three points in the bag, we have gone 11 games undefeated and it just felt like the Roar were due for a loss.  I have also never seen the Roar lose an A-League game at home in the 3 years that I have been going to their games.  Granted I didn’t watch them all that often in 2008 and 2009 but I realise that eventually, I’d have to see them lose a game.

After a scrappy opening exchange, we went a goal down after a Fury attack down the sideline found an unmarked Gareth Edds who cooly slotted the ball into the back of the net from six yards.  What the hell what that?  What happened to the marking?  That goddamn Matt Moody was miles out of position! It’s too bad he’s only playing because Steffanuto is injured!

It felt like my ill-feeling prior to the game was coming true.  After the early goal, the Fury proceeeded to sit back and play eleven men behind the ball.  For our part, the Roar were woeful.  A returning Matt McKay in the midfield, fresh from his international duties, seemed out of sorts.  He lacked his usual cohesion and dominance in the middle of the park.  Passes were going astray.  Runs were mistimed.  Broiche, who so often asserts himself in the game so well, was having a quiet game.  Murdocca seemed to pass the ball backwards every time he got it.  It was a frustrating half of football.  After the ref blew his whistle, the boys headed into the sheds a goal down.

During the interval, we were treated to a fashion show complete with red carpet and runway.  It which was close to the strangest thing I’ve seen during a halftime spell at Suncorp.  I’m not sure who thought that the Roar supporters would be a good target audience to model some new evening gowns but who knows, maybe it’ll work.  Perhaps there was some guy sitting in the stands nursing a beer at halftime thinking We’ll need to press harder in the second half.  I’d like to see Solorzarno working the line a bit more.  And perhaps I’ll pick up that Country Road floral blouse thats in the Summer catalogue of David Jones tomorrow.

The Fury weren’t any better in the second half.  Fortunately, Postecoglou was quick to act for the Roar.  He make an attacking substitution, removing the woeful Moody for Mitch Nicholls and eventually the pressure finally told and right back Ivan Franjic found the back of the net for the Roar after the 85th minute.

The guy sitting behind us asked us to sit down when we jumped to our feet to celebrate the goal.  My friend Rich looked completely bemused.  What are you talking about?  Sit down?  This is football!

That same guy then left around the 89 minute mark, telling his friend ‘Lets beat the traffic and head home early’.  What a guy!

The game finished one all.  Thats two games we’ve drawn this week and thats been against two of the lower ranked sides in the competition.  Meanwhile Adelaide United returned to their winning ways and the Central Coast Mariners still loom as a side with a handful of games in hand who could easily catch up.  The unbeaten streak stretches to twelve but it wasn’t the best week for the Roar.  Our lead at the top of the table now sits at 3 points.  Crucially, it also feels like our momentum has been lost.

Next game?  A midweek clash against Perth Glory and a chance to see God play. 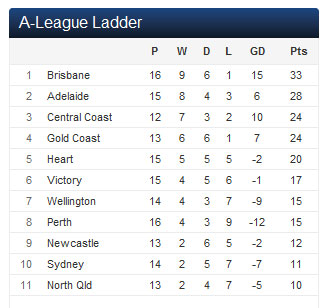