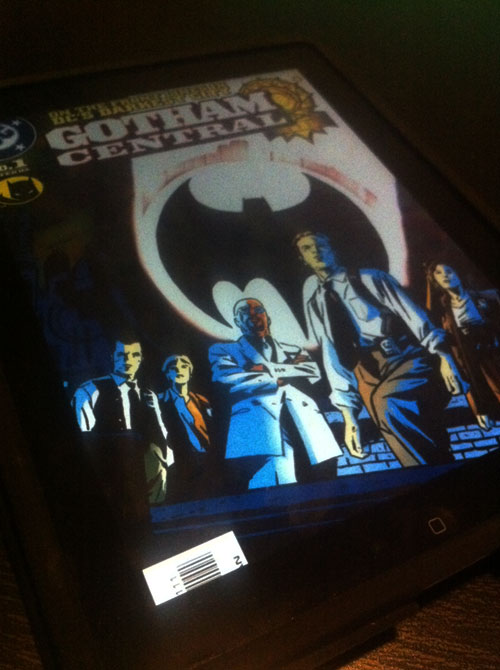 A couple of months ago, Mike put me onto an iPad app called Comic Zeal.  It’s price veered towards being one of the most expensive things I’ve ever bought on the App Store (it was about eight bucks) but it’s been totally worth it.  It sounds like a pretty simple proposition but I don’t believe anyone has made anything better.  It’s a Comic Book reader.  You download comics onto it, you can sort ’em into folders, it remembers your page and yeah…thats about it.  But its been fantastic for me to use to both check out comics that I haven’t read before (Gotham Central) as well as re-discovering some old comic books I read as a kid (the Spider-Man Clone Saga).

When Jen and I go to bed at night, she’s always used the iPad while I got a piece of paper and some crayons.  I didn’t really mind this arrange until now where I find myself wanting to read through a couple of issues of Gotham Central before nodding off.  It’s the best iPad app I’ve used all year.  If you’ve got an iPad and like comics, then you really should get this.

Previous: The Ides of March
Next: The Spider-man Clone Saga