In the Ozark Mountain region of Missouri, a young teenage girl Ree looks after her invalid mother and younger siblings in a run-down log cabin.  The Ozarks are a freezing cold, poverty-stricken, rural area and her father’s absense means that Ree must chop wood, hunt animals and provide constant round the clock care for the rest of her family who are entirely dependant on her.  It’s a hard life.

Ree, played by Jennifer Lawrence, takes this all in her stride.  Ree looks and talks like a seventeen year old girl but her eyes look much older and show the weariness of someone who has had a tough upbringing.

We learn all this in the opening few minutes of Winter’s Bone.  How could life get any worse for Ree?  That’s where Sheriff Baskin comes into the picture.  He explains to Ree that her absent father has skipped out on his latest court hearing.  The problem is that the last time he was in prison, he put his property up as collateral for bail.  If Ree’s father doesn’t appear for his trial in a week’s time, then their home will be repossessed.

This sets Ree on her mission.  She must find her father and convince him to turn up for the trial.  She has a single clue to get her started.  She knows her father dabbled in the local drug trade so she’ll have to make some inquiries with some of the shadier folk in the Ozarks.  To make things even more complicated, she meets with Teardrop, her uncle, who believes that Ree’s father might have been killed.

That last paragraph makes Winter’s Bone sound like a thriller or a road movie of sorts.  It’s not, really.  It’s more of a character piece.  Ree, the determined and steely teenager is the film’s protagonist.  The rest of Ozark, feels like it collectively represents one dirty, meth-addicted obstacle who refuse to co-operate and would rather this girl stop putting her nose where it isn’t wanted.

Winter’s Bone is often a difficult film to watch.  Most of the time, although we admire Ree’s courage, we’re also filled with a sense of dread for her wellbeing.  The rest of the time, the film evokes the same sort of feelings as Deliverance does about small-town America.  What the hell is this place?  Can entire town’s really end up like this?  It’s pretty depressing.  It also brought back memories of Louis Theroux’s excellent documentary ‘A City Addicted to Meth‘.

Ultimately, I suspect that Winter’s Bone won’t find a particularly large audience or be remembered in years to come.  It’s an excellent film but its subject matter is very dark.  The Oscar nominations will probably help stretch out its lifespan in the cinema but I suspect its mostly making up the numbers at the Academy Awards, unless there’s an award for most misleading poster.  Seriously, what the hell is this: 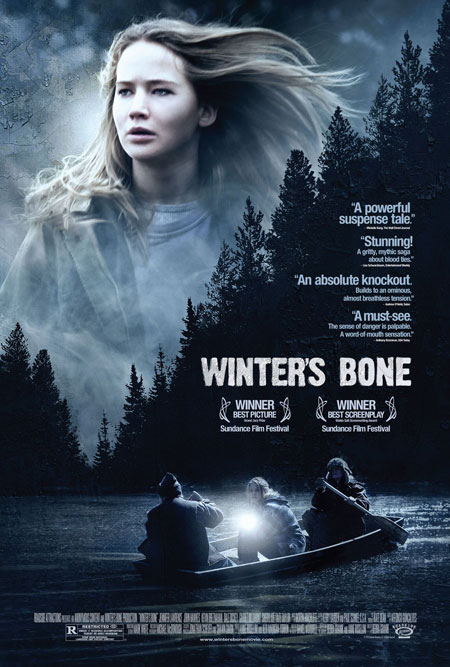