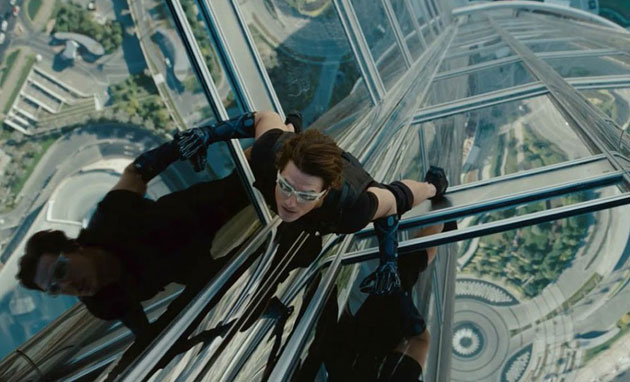 Over the Christmas break, I rewatched the first two Die Hards and came to a realisation that I love nothing more than a good, well crafted action movie. It’s just a shame that there’s not enough good ones out there.

The genre has certainly seen better days.  Die Hard 4 was horrific.  Jason Statham’s best work is years behind him.  We all wanted to like The Expendables but it was terrible.  The last Bond film was a bit iffy and the Bourne franchise seems to be in development limbo.  The wretched quality of contemporary action films is probably why we get excited when someone even comes close to hitting the mark.  Look at the reception Taken got.  It’s a pretty uneven and poorly made film but they at least got the part with Liam Neeson looking like a total badass right.  So everyone loves it.  With Mission Impossible: Ghost Protocol we finally have an honest to goodness A-grade action film with a big star, good reviews and a big box office.

Mission Impossible: Ghost Protocol was a film I didn’t even know I wanted.  I had seen the first three films but didn’t think very much of them.  Beyond the theme song and the message self destructing in ten seconds, I don’t really identify any major recurring themes with the series.  I can hardly tell you a thing about the main character Ethan Hunt either.  I just remember that he’s a spy and he’s Tom Cruise.  Taken on face value, there’s not a lot of reason to be excited about a fourth Mission Impossible film.

What I can tell you is that I am a big fan of the director Brad Bird who has made three nearly flawless films before this one – The Iron Giant, The Incredibles and Ratatouille.  Mission Impossible: Ghost Protocol is his first live action film and once again, he’s delivered the goods.

With Ghost Protocol, Brad Bird is faithful enough to the basic structure of the Mission Impossible formula – there are globetrotting spies, cool gadgets, a world that needs saving and plenty of action – but Bird’s contribution to the franchise is to give it a sense of humour, an eye for detail and some incredibly well constructed stunts unlike what the franchise has seen before.  For my money, it is easily the best of the four films.

We begin Ghost Protocol with Ethan Hunt being busted out of a Russian prison by his companions and when he receives his instructions for his latest assignment, the phone booth doesn’t self destruct after ten seconds like its supposed to.  It just sort of fizzles out.  This sets the tone for the rest of the film where just about nothing works the way that it should for Hunt and the IMF team.  Gadgets break, enemies behave unpredictably and human error causes missions to fail disastrously.  And thats where half the fun comes from.

For a guy who started making his first action films four decades ago, Tom Cruise is still a remarkable physical presence.  He punches, kicks, shoots, dives and runs all over the place.  He does a lot of running in particular.  I felt like he ran for almost half the film.

In his team, Ethan is backed up by three agents. Carter (Paula Patton) an unstable agent who is out for revenge when her partner is killed.  Benji (Simon Pegg) is the gadgets expert and comic relief.  And Brandt (Jeremy Renner) is a CIA analyst with a mysterious background.  They make a good, likable team that feel familiar and easy to cheer for.

The high point of the film of course is the set piece in the Burj Khalifa tower in Dubai that comes about midway through the film.  This vertigo-inducing sequence looks spectacular on a big screen and is all the more incredible as Cruise himself performed the stunt on the actual building itself.  What a psycho!

That particular sequence is a neat little microcosm of what the entire film has to offer.  There are breath-taking live action stunts, humour in the form of Cruise’s unreliable sticky gloves and sex appeal in the form of the stunning assassin Lea Seydoux.  All this comes together in a tense covert exchange of nuclear arms codes for a briefcase full of diamonds.

But there’s more.  A fight scene that takes place in what appears to be a futuristic Indian carpark (you read that right) shows Bird’s finesse in shooting a visually engaging scuffle.  Cruise is pushing fifty and the guy he’s fighting looks even older so a straight up brawl wouldn’t be particularly interesting.  Instead, they tussle over a briefcase and everytime a person gets the upperhand a moving platform, a car or a well timed boot to the face sends the briefcase flying once more.  The scene plays out like a Rube Goldberg sequence where each bump, jump and grab feels interconnected to one another.  It reminded me of watching Jackie Chan or Buster Keaton.

In a round about sort of a way, I can see how Brad Bird, who was meticulous in storyboarding action sequences in his animated films would be able to parlay this talent into directly actual people in such a physically demanding movie.  Bird isn’t too bothered with grounding the film in realism and Ghost Protocol is better off for it.  In moving from animation to live action, Bird has lost none of his knack for pacing, charming charactersation and sense ofunbridled fun.  And for that, Mission Impossible: Ghost Protocol is one of the best action movies since Die Hard II:  Die Harder.

Summary : Brad Bird has made a fantastic action film that is helped immensely by the lack of CGI and Tom Cruise doing his own stunt work. The Burj Khalifa scene is a hell of a thing.

Previous: Youtube Friday: Former Australian prime minister Bob Hawke attends the cricket
Next: A-League 2011/12 – Round 15 – Was it a win or was it Victory?