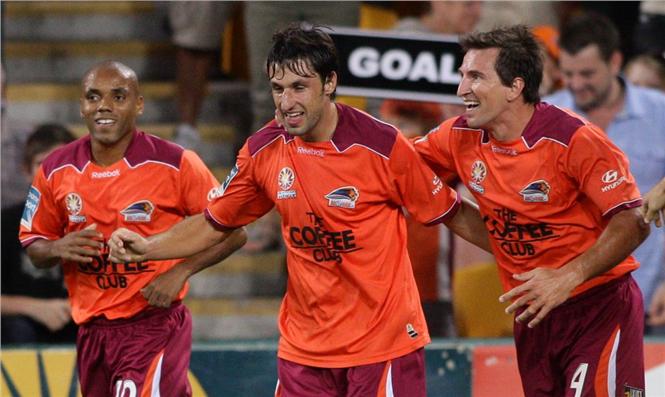 You never want to get complacent in football at the best of times.  You certainly don’t want to do it during the Finals no matter how certain a result appears to be.  Just ask the West Ham squad who played Liverpool in the 2006 FA Cup Final.

Coming into the second leg of the major semi final with a record 26 game unbeaten streak for the Brisbane Roar, a home ground advantage and a two goal lead, I asked my friend Rich shortly before kick-off what plans we should make for the grand final.  He looked at me like I was crazy.  ‘Lets not get ahead of ourselves.’

Upon kickoff, the Roar had the better of the exchange in the opening half hour.  We dominated possession as we do and created the better of the chances with in-form striker Kosta Barbarouses having a couple of particularly golden opportunities.  There was the occasional defensive lapse but the Mariners were making a hash of it.  Their Argentinian striker Peres in particular blew a great opportunity by scooping the ball over the bar around the twenty minute mark.

Against the run of play, five minutes before halftime, Mariners striker Danny McBreen fired in a shot from close range which deflected off defender Matt Smith and went into the net.  1-0 Mariners.  Immediately following the kickoff, another of their players pinched the ball and laid it on for Bozanic who made a darting run to the edge of the penalty area and curled in a second goal, barely a minute after the first.  2-0 Mariners.  I couldn’t believe what was happening.  The home grand final, the major semi, the unbeaten streak.  It all appeared to go up in smoke.  What the hell just happened?

If there was ever a time for coach Ange Postecoglou to earn his paycheque it would be with this halftime talk.

In the second half, the Mariners came out firing, looking for that decisive third goal that would take them through to the final.  The Roar for their part, appeared to still be on the back foot and were uncharacteristically pinned back in their half.  After soaking up some pressure for fifteen long minutes, a counter attacking opportunity saw Thomas Broich break down the wing and then make a beeline directly for the goal.  He looked up, saw his partner Solozarno making a run in the middle and then completely bamboozled the Mariners keeper Matthew Ryan by shooting at goal instead of crossing the ball.  The ball deflected off the keeper’s shins and the Roar were back in the game and back in front 3-2 on aggregate.

The next half an hour saw plenty of free-flowing football from both sides with open spaces and shots from all over the park.  Coming to the end of the regulation 90 minutes of play, it looked like the Roar would lose their undefeated streak but still do enough to make it through to their first ever A-League grand final.  A bittersweet passage to the finals if there ever was one.

Then, in the first minute of stoppage time, Massimo Murdocca squared a pass into the penalty area for Henrique who fired the ball into the roof of the net.  2-2.  The goal confirmed a home Grand Final but also the extension of the Roar’s unbeaten streak to twenty seven games.

After the game had ended, and over a couple of celebratory pints at Caxton Street, we finally began to make plans for the final.  Two weeks to go.  I cannot wait.

Previous: Youtube Friday: The Trailer For Every Oscar-Winning Movie Ever
Next: What The Dog Saw by Malcolm Gladwell