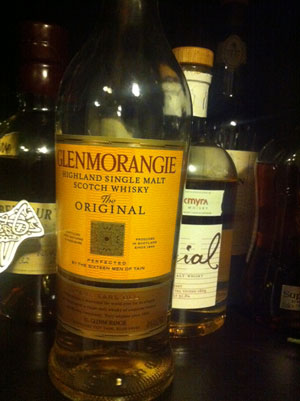 NOSE Light floral aroma and I swear to God…bananas (?)

PALATE Sweet, primarily tastes of vanilla, oak and grass.  Definitely a flavour that is refreshing and evocative of summer.

FINISH Goes down easy. Maybe a little too easy (hehe).

NOTES After last weeks 60% strength A’bunadh, this was like sipping water.  I suspect the main reason that Glenmorangie does so well in Australia is that it is by far the #1 whisky in the market for being bundled with free crap. I’ve got some Glenmorangie whisky tumblers in my cabinet and I’m pretty sure there’s a Glenmorangie branded pouch and booklet lying around somewhere too.  It’s a modestly priced whisky thats a nice alternative to all the heavyweights I’ve been blogging about in the past few weeks.  Although its milder than most, it still manages to be flavoursome all the same.