Don't Miss
Home > Film > Inside Out 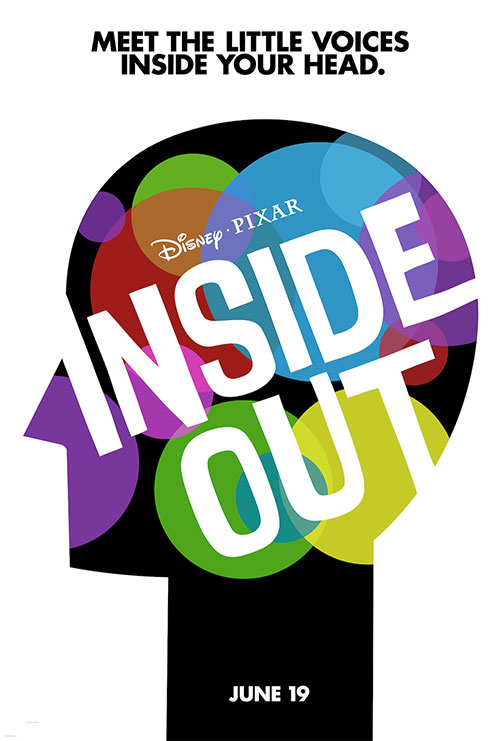 Inside Out is the fifteenth feature length Pixar film and after doing three sequels in their previous four films, this story about a young girl who moves with her family to San Francisco is a welcome return to the creativity and imagination that the studio was once known for.  Twenty minutes into Inside Out, I was enjoying the proceedings immensely and had absolutely no idea what direction the story would take thanks to its highly unconventional set up.  It’s kind of like an All Ages version of Eternal Sunshine Of The Spotless Mind if such a thing is possible.

Inside Out‘s premise is to explore the inner workings of the human brain, with every person being operated by five distinct personalities – Joy, Sadness, Fear, Anger & Disgust – who live together in Headquarters.  The emotional personalities exist in a vast neurological plane that is populated with dream factories, a Train of Thought and miles of shelves storing marbles made of memories.  It’s easily the most interesting landscape that Pixar have come up with since the Scare Factory in Monster’s Inc.

The head space we spend most of the time inhabiting belongs to Riley, an eleven year old girl from Minnesota who plays hockey, enjoys monkeying around with her parents and has recently relocated to San Francisco.  When the move doesn’t go as smoothly as the family hopes (the contents of their home is late getting delivered and some financial difficulties are hinted at), Riley’s mother asks her to put on a happy face and play the supportive daughter for her father.

Joy fully intends to comply with Riley’s mother’s request but she hits a snag when Sadness begins tainting Riley’s memories, turning happy memories into miserable ones.  This leads to Riley experiencing some emotional turmoil and ultimately expelling Joy and Sadness out into the far reaches of Riley’s mind, leaving her immediate behavior to be controlled by Anger, Disgust and Fear.  Joy and Sadness face a long journey back to Headquarters but they are in a race against time.  Riley feels overwhelmed by her move to San Francisco, missing her old friends and the lifestyle in Minnesota.  Guided by Anger, Disgust and Fear she decides to run away from home.  Only the safe return of Joy and Sadness can change her mind. 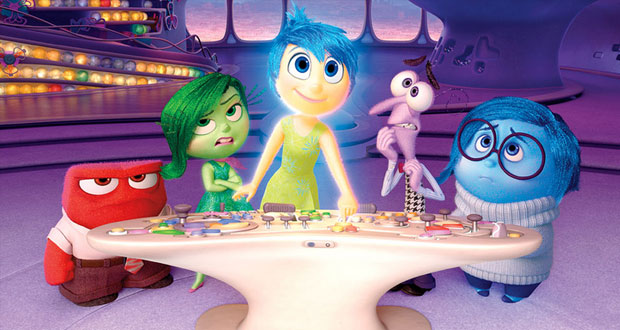 Inside Out is unlike any children’s film I can recall seeing.  It’s got that much-lauded Pixar trait of appealing to both children and adults but I think that quality is more apparent here than ever before.  Most of the film’s emotional high notes are associated with the melancholy of growing up and having childhood memories fade away.

The film has no villain.  It does have a goofy and fluffy companion by the name of Bing Bong that kids will love but his tale is laced with sadness.  He is Riley’s imaginary best friend from her early childhood and he is slowly disappearing from existence as Riley grows up.

Pete Docter takes the concept of Inside Out and creatively goes for broke, leading Joy and Sadness through a myriad of weird and wonderful mental landscapes.  The Dream Factory is like a Hollywood studio that produces short films.  Imagination Land has delightful landmarks such as French Fries Forrest.  I won’t spoil what exists inside Subconscious Thought (which exists behind an enourmous closed gate).  The locales are a terrific grab bag of creativity and charm.

The voice casting in this film is note perfect.  Amy Poehler is suitably bright and bubbly as Joy and Phyllis Smith is the perfect foil as the perennially glum Sadness.  I can’t say a bad word about Lewis Black as Anger although I must admit, I miss the days when this type of role would go to Gilbert Gottfried.

I think it’s a tad unfair to call Inside Out a ‘return to form’.  Toy Story 3 and Monsters University may be sequels but I still think they are great films.  That said, Inside Out is a film bursting with ideas and ambition.  Pete Docter’s fable is a literal emotional journey that is full of wit, charm and thoughtfulness.  It’s stayed with me in the days since I saw it.

Time will tell whether it will be as fondly remembered as Up, Ratatouille and The Incredibles but I think its prospects are pretty good.  There isn’t anything like it and I mean that in the best possible way.

When eleven year old Riley Anderson moves to San Francisco, the emotions inside her head spin out of control.

Summary : The most creative Pixar in years, Inside Out has been worth the wait.

Previous: A Week In Wellington
Next: Game of Thrones Season Five