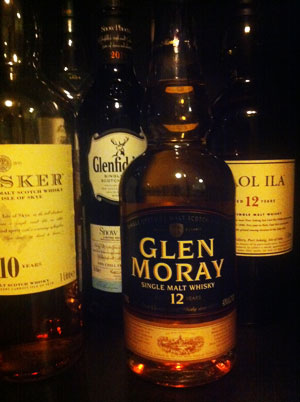 NOSE Faint, but sweet aroma of vanilla and butter

FINISH Not particularly lasting, a lingering note of peat and thats about it

NOTES This was the whisky that my work colleagues got me for my birthday this year!  I’ve never had a Glen Moray before tonight.  I remember when my father-in-law was visiting in July he was trying to convince me that whisky makes for a good aperitif.  Now, I was a little dismissive at the time because I know this man loves his whisky and would probably tell me with a straight face that it goes great poured over your Weetbix in the morning too.  Having said that, this Glen Moray is about as light and crisp a tasting whisky as they come and its relative mildness would probably do the trick as an aperitif.  It’s still got the essense of whisky but it won’t have you slurring your words before the main course is served.  A subtle yet pleasing flavour.

Previous: Snow In Wellington
Next: The Euro