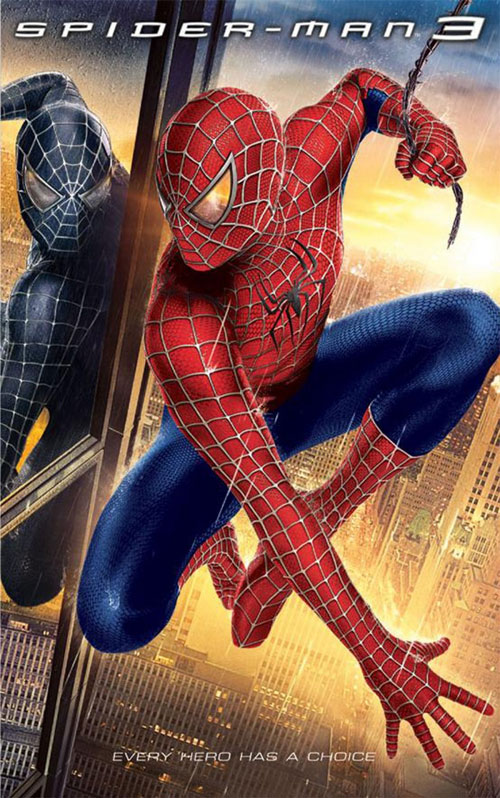 Spider-man 3, the final chapter of the Raimi trilogy of Spider-man films, is a packed finale that is a fitting send off to those involved with the megabucks franchise that started in 2001.

Whats surprising is that for a film that looked a little overstuffed with three major and seemingly independent villains, Raimi sticks to what makes Spider-man work and keeps the focus of the film on Peter Parker and not the guy in the suit.

Let it be said that Tobey Maguire has gotten the act of playing Peter Parker down to a fine art and really shines through in this film.  Maguire’s Parker is equal parts heroic, dorky and self serving.

In Spider-man 3, Parker becomes consumed by an ‘alien symbiote’ suit that makes his character undergo a drastic transformation into this glorious emo metrosexual dick.  Under this guise, Maguire steals the show with his preposterous rubberfaced expressions and Saturday Night Fever strutting.  Spider-man 3 is easily the most demanding role of the trilogy for Maguire and he remains accomplished whether playing the despairing lover, the hapless comic or the triumphant hero.

Spider-man 3 continues the series’ tradition of having a colourful supporting cast.  Mary Jane, J Jonah Jameson, Aunt May and Harry Osborn all make their return and are wonderful characters who have a real chemistry and history with Peter Parker.  Topher Grace was also excellent as Parker’s rival, Eddie Brock, who was only previously mentioned offscreen in the first film.

There are moments where Spider-man 3 is perhaps a little too big for its own good.  The film clocks in at a robust 140 minutes but with relationship problems, a feud with a best friend and three villains, how much times is afforded to Gwen Stacy?  About five minutes.  How much time is given to the origin of the symbiote suit?  About five seconds.  No matter though, as Raimi ultimately focuses on the important things and fans of the series can easily fill in the blanks that he chooses to leave out.

Its not a stretch to say that the Spider-man franchise is possibly the biggest and most bankable franchise in Hollywood.  So with Raimi and the principle cast likely to leave at this juncture, where does that leave Spider-man?  If the franchise does turn into Columbia Pictures’ equivalent of the Bond series with new directors and actors taking the helm in future, Raimi leaves them plenty to work with.  In fact, Spider-man 3 doesn’t really feel like the final part of a trilogy at all.  There are barely any loose ends tied up and some characters simply walk away and can be revisited in future films.  Raimi has created this film not as a farewell but as just another day in the life of your friendly neighbourhood Spider-man.

It’s carnage out there

Summary : The film is a little overcrowded but this is still an entertaining send off for Raimi's vision of the Spider-man universe. Who's next?