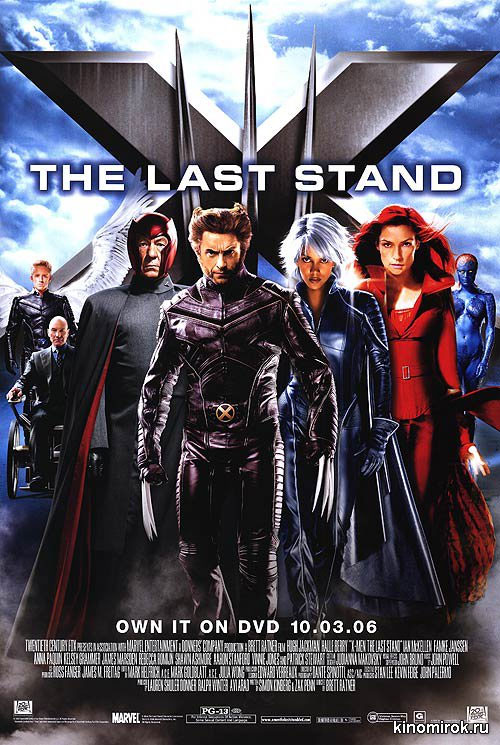 X-men 3: The Last Stand is the closing chapter in one of the big franchises that helped bring Marvel super hero films to the mainstream.  The first X-men film had a troubled development cycle.  There were major changes in the script right up to the point of shooting, there were different writers involved and we didn’t get a Wolverine cast until the last minute.  And it all came together beautifully.

The film starts with the announcement by a pharmaceutical company The Worthington Foundation that a ‘cure’ have been found for the gene that turns people into mutants.  This medicine has the potential to lead to the extinction of the mutants and the X-men are rightly concerned that the government will rashly decide to enforce this cure on all mutants by force.  Sharing that concern is Magneto.  Ever the man of action, he begins to assemble an army to attack the homosapiens and destroy the cure.  If this wasn’t enough, Scott Summers, leader of the X-men starts hearing voices in his head from Jean Grey, his lover who was thought to have died in the previous film.  He goes to the scene of her death to investigate.

X-men 3 is actually quite a watchable film.  It never slows for a second, there is always something happening and it’s over before you know it.  The same wry jokes that made the series so accessible are still there and the action sequences are fantastic.  A perfect representation of this is Vinnie Jones who is introduced into the series as Juggernaut.  He is hilarious, crude and is involved in some of the film’s best sequences.  In this regard, Brett Ratner has captured the style of Singer’s previous films quite admirably.  Unfortunately he managed to capture absolutely none of the substance and sours the trilogy with some absolutely risible storytelling.

The film is completely devoid of any emotional connection with the audience.  None whatsoever.  I guarantee you not a single person who watches this film will feel a sense of loss at the deaths of some of the most loved characters from the previous two films.  This in itself is quite an accomplishment (for all the wrong reasons).  When Charles Xavier kicks the bucket, there’s a birds eye view of Wolverine on his knees, a short funeral with a speech given where I have already forgotten all the words that were said and that’s about it.  All done in a matter of minutes.

This is nothing compared to the death of the LEADER OF THE X-MEN, Scott Summers.  I know for a fact no one will feel his loss because he dies off screen (!) and not a single person is shown lamenting his demise.  What in the holy hell did he do to deserve that send off?  It also comes at a juncture in the film where there is no resolution to the three-movie-long love triangle between him, Jean Grey and Wolverine.  No payoff whatsoever.

Jean Grey’s newfound bi-polar disorder is equally trite.  Explained by Xavier as a dormant dark side that makes her wild, passionate and angry, it turns out that her alternative character is actually a mindless sedate Jean who follows Magneto around for no reason and without question.

By the film’s conclusion, everything is wrapped up tidily and a FOX News broadcast shows us that all is right in the world with humans and mutants.  No reason is given for this newfound unity and peace.  We just have to take FOX’s word for it.

Brett Rattner was not the person to make this film.  He would have been well suited to do a spin off show with Juggernaut and Chris Tucker as whacky mismatched cops who are forced to work together.  The film is a wasted opportunity and it’s likely that we’re not going to see it get done right by anyone without having to restart the franchise from scratch and pretend this all never happened (which is sort of what happened with Batman I guess).

Oh well.  You can’t win them all I guess.

The third chapter of the X-Men films is a bitter disappointment.

Summary : A lousy end to what was shaping up to be a great trilogy of super hero films. Rattner drops the ball big time.