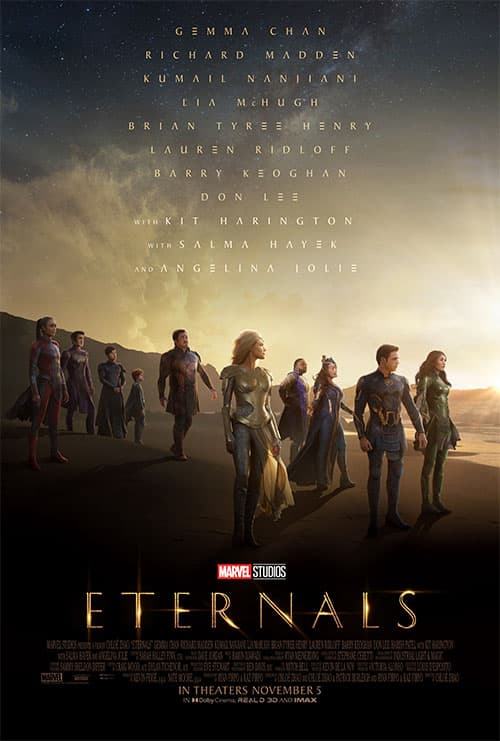 Marvel super hero movies are like McDonalds.  It’s no secret that the key to their enormous box office success lies in finding a particular formula – the ratio of action to dialogue, the running time, all ages appeal etc – and staying that course.  Audiences well and truly know that they’ll get when they walk in to see an MCU film and with very few exceptions, they’re not likely to be disappointed.

Every now and then, it feels like the producers get sick of making happy meals and entertain the idea of bringing in an acclaimed art house director to mix up the formula.  Some are natural fits – as Taika Waititi has proved to be – and others, such as renowned thespian and Shakespearean director Kenneth Brannagh, end up getting consumed by the Marvel machine where the end product feels much more Marvel than a part of the director’s oeuvre.

Eternals is a Marvel movie written and directed by Academy award winning Chloe Zhao, who picked up an Oscar for Best Director this year for her efforts with Nomadland, a film starring Frances McDormand about a woman who experiences long term homelessness.

Nomadland is a film about human connection.  It has a small cast and is heavily centered on McDormand’s connections with other people when she is destitute to the point of owning a van and virtually nothing else.  So how does Zhao’s style and artistic sensibilities translate to a Marvel super hero feature? 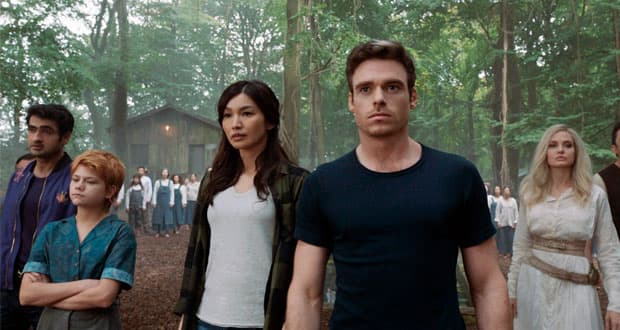 Eternals begins by introducing us to eight immortal celestial beings who are sent to Earth by the deity Arishem to protect humankind from the deadly alien race known as deviants.  When the Eternals wipe out all the deviants in the 1500s, they expect the arrival of Arishem to take them home.  Instead their leader Ajak (Selma Hayek) instructs them to stay on the planet and remain on guard should the deviants return.  The Eternals, who have wildly differing opinions on whether they should directly use their formidable cosmic power to interfere with the affairs of mankind, go their separate ways.  Some of the Eternals, such as Kingo (Kumail Nanjiani) directly integrate with humans, while others such as Gilgamesh and Thena, live a quiet, humble existence in remote locations.

From this framework you can see the fingerprints of a Chloe Zhao screenplay where she casts a lens on the human condition and explores some big picture ideas and moral quandaries for the immortal beings.  Phastos, a gifted inventor, and Druig, an Eternal who can control people’s minds are the most conflicted about the pros and cons of using their power to directly influence humans.  Phastos can develop incredible inventions and pass his knowledge onto man, but he is scarred when his gifts are used to create the bomb dropped on Hiroshima.  Druig feels he could prevent genocide by enslaving the minds of humans but realises this strips them of free will.  Sprite, takes the form of a 12 year old human and develops intense frustrations with her Tinkerbell existence.  Two of the Eternals – Sarsi and Ikaris – develop a romantic relationship that spans thousands of years but it begins to unravel towards an unhappy end.

Eternals has the foundations of an interesting and very un-Marvel like Marvel movie.  It also has the ignominy of being the worst critically reviewed Marvel super hero and it received a mixed reception at the box office.

Where the film badly comes apart at the seams is you can clearly tell at some stage during the creation of this film, a producer has got cold feet on making a Chloe Zhao film and decides to steer the film towards being a more traditional Marvel affair.  The result is a film that has scenes where immortal beings reflect on their growing disillusionment with their god Arishem and then their philosophical musings are broken up by Kingo’s mobile phone ringtone accidentally going off and blaring Lizzo’s Juice.  There clearly exists a draft of this screenplay that plays the whole thing straight and then the one that we ended up with, where someone has added a bunch of banter and action sequences to break up all the chit chat. 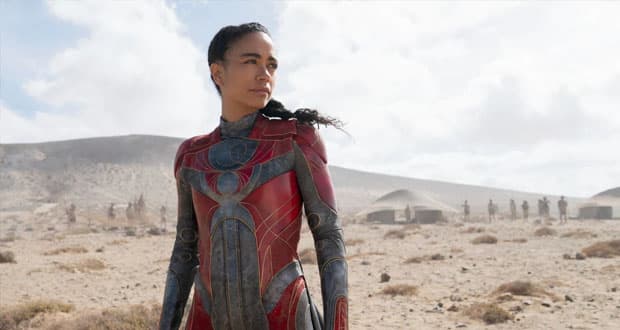 The end result is a hot mess.  I can understand why audiences were bemused or disappointed with the end result.  It is a film that will not wholeheartedly please Marvel fans or Chloe Zhao fans.  It straddles an awkward middle line.

If I’m honest, I personally didn’t mind the film that we got.  I prefer a film with sky high ambitions and wobbly execution over, say, Ant Man 3 or another Captain America movie (which will still get made eventually anyway).  It’s interesting to observe that although Marvel has by far the best overall consistency in quality when it comes to super hero films, it comes at the expense of creativity.  Studios like Fox have a much shakier range in the quality of their X-men movies but when they went all in on making Logan an unconventional Western-inspired genre piece, they were actually able to execute on that vision.

Eternals feels like it falls well short of whatever the original vision was by playing it too safe and trying to please everyone at once.

The saga of the Eternals, a race of immortal beings who lived on Earth and shaped its history and civilizations.

Summary : A tonally jarring and muddled film. You can see the underlying bones of what Chloe Zhao might have been going for but its an uncomfortable fit with the Marvel formula.