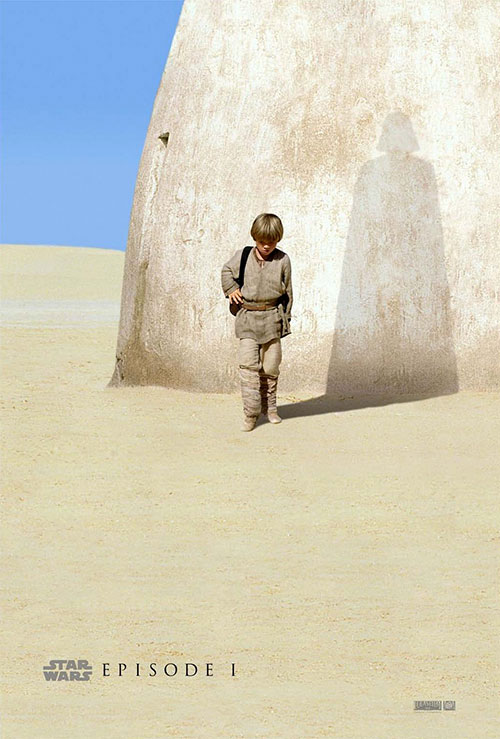 I don’t remember the exact moment that the realization set in but it would’ve been about twenty minutes in.  Oh my God, this is terrible.

The Phantom Menace arrived in cinemas in 1999 accompanied by unprecedented levels of hype and excitement.  The first Star Wars film in sixteen years!  The promotional material in the lead up to the release promised so much.  The casting of Liam Neeson, Ewan McGregor and Natalie Portman ticked the right boxes.  There was that fantastic poster of a young Anakin Skywalker casting the long shadow of Darth Vader.  The trailer looked like a million bucks.

The finished product was an unbridled mess.

The worst crime that anyone can charge The Phantom Menace with is that it is really boring.  The musical fanfare accompanying the trademark scrolling yellow text at the beginning of the film describes unrest in the galaxy because of the “taxation of federation trade routes”.  Huh?  It doesn’t get much better from there.  The film moves at the pace of treacle, is an unfocussed mess and is about half an hour too long.

McGregor and Neeson.  Those poor guys!  They are talented actors who are given absolutely nothing to work with.  Neither the characters of Qi Gon Jin nor Obi Wan Kenobi  appear to have discernible characteristics.  They just dryly observe their surroundings and explain to the audience where they’re visiting next.  Natalie Portman has it even worse.  She is afforded none of the spark or charisma that Princess Leia was given and must be glumly staring at ten year old Jake Lloyd and thinking I’m supposed to become romantically involved with that kid in the next movie.

The Phantom Menace is the poster child for how action films in the Nineties aged more poorly than their predecessors in the Eighties because they eagerly ditched physical special effects and went all in on digital.  Not unlike Deep Blue Sea, The Mummy and The Scorpion King, the computer effects in The Phantom Menace lack any sense of heft, presence or believability.  The battle between the droids and the Federation troopers at the end of the film feels like you’re watching a poorly rendered computer game.  I don’t even understand who the audience is supposed to be rooting for. 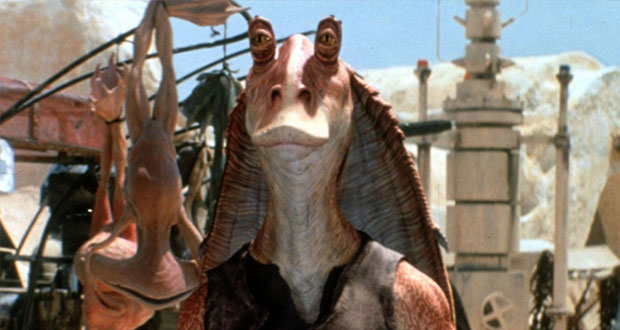 In the same way that everything came together perfectly for Star Wars Episode IV: A New Hope, almost all of the strengths of a Lucas Workshop production abandon George Lucas here.  The new ships and droids look lifeless, overdesigned and visually uninteresting.  The film is oddly socially regressive as a number of the supporting cast are crude and blatant caricatures of Asians, Jews and Rastafarians.  Jar Jar Binks rightly earned the most amount of scorn from the audience because of the mind numbing amount of screen time he takes up but practically all of the other new characters are just as terrible.

The story is a convoluted mess.  They ruin the mystique of the Force with ‘midichlorians’.  The fight scenes are boring.  The cinematography is shockingly rudimentary.  The characters don’t have any chemistry together.  None of the one liners are memorable.  Jake Lloyd is irritating.  Nothing works.

I want to be charitable and find some good things to say about The Phantom Menace.  Thinking long and hard about it, I think the pod racing sequence was okay and Darth Maul was a visually interesting arch nemesis for Obi Wan to fight.  Having said that, in another case of ‘less is more’, the over-choreographed balletic light saber battles in the New Trilogy do absolutely nothing for me.

I’d prefer The Phantom Menace didn’t exist.  It was unmitigated disaster.  It remains a cautionary tale for everyone this week as we eagerly await the release of The Force Awakens.  It’s a film that should be approached with a healthy level of optimism.  It looks great.  But let’s not get too carried away.  There’s always The Phantom Menace.  You never know when it could strike again.

Two Jedi Knights escape a hostile blockade to find allies and come across a young boy who may bring balance to the Force, but the long dormant Sith resurface to reclaim their old glory.

Summary : An unmitigated disaster and an utter let down after over a decade of waiting