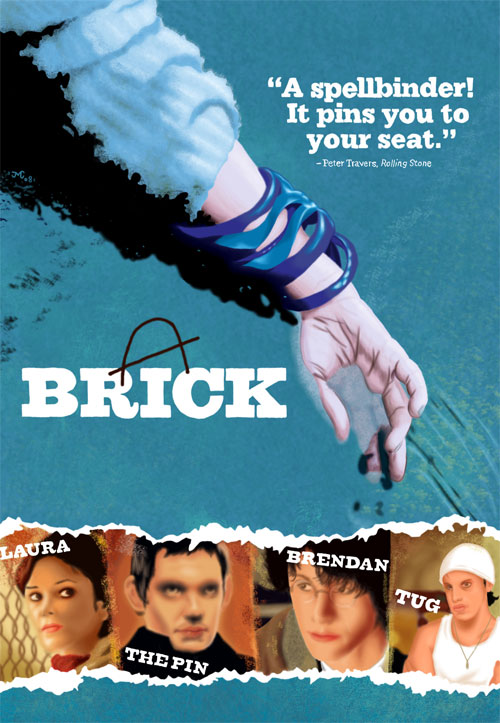 There will be a portion of viewers who watch Brick that will find it difficult to get past the gimmick.  It is a high school mystery told in the style of film noir.  This is a film that is stacked with hoodlums, a damsels in distress, a femme fatale, a detective and a ruthless kingpin.  Only they’re in the guise of jocks, cheerleaders, nerds and greasers at a high school.

Like the plastic bag scene in American Beauty, it’s something that either works for you or it doesn’t.  Fortunately with Brick, you’ll know pretty early on in the film if this is to your taste.  Me?  I liked it.  Even loved it, in parts.

Joseph Gordon-Levitt is our hard boiled detective Brendan who discovers his ex-girlfriend lying face down dead in a drainage ditch at the start of the film.  He must piece together the evidence and solve the mystery.

Brick throws the viewer into the film’s world without wasting any time.  The characters talk fast and the story gets complicated quickly.

The way that the director Rian Johnson has approached the film is to have the actors play it straight so that there aren’t any knowing winks to the audience.  But the film is also self-aware and can still make fun of its own premise.  Most notable is a scene where the druglord known as The Pin and Brendan have a meeting over the family dinner table and there is an important conversation that is interupted periodically by The Pin’s mom who serves the kids food and drink.  Only a moment ago, The Pin’s goons were laying a hellacious beating on Brendan.  Brick is very adept and switching its tone from laughter to viciousness.  Not unlike some of the Coen Brothers’ films such as Fargo and Miller’s Crossing.

Brick was made on a shoestring budget and unfortunately, I’m not saying it just because the film is an excellent achievement artistically but because it is also a bit weak technically.  Edited on Rian Johnson’s Mac using Final Cut Pro, the film occasionally suffers from audio issues where the dialogue is too quiet and you have to strain to keep up with the fast talking characters.  It’s worth revisiting this film with subtitles if you get the chance.

I haven’t talked too much about the story but thats partly because I’d rather not spoil it and partly because it doesn’t matter too much.  This is a film that is as much about the journey as it is the destination.  Brendan, Laura, The Pin, The Brain and Dode all are entertaining characters and its their various interactions that carry this film.

Some of the best and most loved examples of the film noir genre are the ones that don’t follow its well established conventions.  Chinatown was one such film and while Brick doesn’t quite reach that level, it still entertains and succeeds in creating a blend of styles that hasn’t been seen before.

Director:  Rian Johnson Writer:  Rian Johnson Cast:  Joseph Gordon Levitt, Emilie de Ravin There will be a portion of viewers who watch Brick that will find it difficult to get past the gimmick.  It is a high school mystery told in the style of film noir.  This is a film that is stacked with hoodlums, …

Summary : An ingenious and creative modern spin on the noir genre. It marks the arrival of Joseph Gordon Levitt as a serious actor and director Rian Johnson is a talent to look out for.