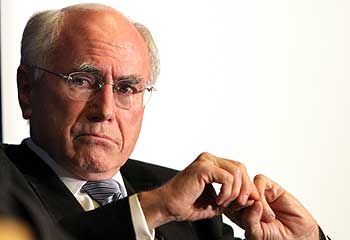 Australia is a democratic country with a two party majority:  the conservative Liberal Party and the slightly less conservative Labor Party.

Australia lived and thrived in economic prosperity under Liberal Party legend John Howard in the late Nineties and early Two Thousands.  Howard had endured plenty of peaks and troughs in his tenure as Australian Prime Minister but after winning four elections, he had entered Liberal Party folklore, much in the same way that Ronald Reagan is revered by Republicans in America.  He could do no wrong.  After beating Paul Keating to get into office, he saw off challenges from Mark Latham, Simon Crean and Kim Beazley over three re-election campaigns.  He did this by creating divisive wedge issues just before an election which made him stand out from his opposition counterpart in an issue that he manufactured.  This ensured that he would set the agenda leading into an election and he was wise enough to play to his base that responded to events such as Children Overboard and The War In Iraq by voting him in a record four times in office.

After a string of failed opposition leaders, the Australian Labor Party turned to Kevin Rudd.  Rudd saw the mistakes the other ALP leaders made.  They all positioned themselves as being ‘Not Howard’ which is not enough to an election, much in the same way John Kerry couldn’t beat George Bush in 2004 by being ‘Not Bush’.  Rudd immediately set out and created his own agenda.  He immediately stated he would apologize to Aboriginals, create a national broadband network, roll out a carbon emissions trading scheme and repeal the controversial Workchoices.  This bamboozled John Howard who has never heard of the Internet, didn’t know what climate change was and was stuck with the other two because he was famous for refusing to apologize to Aboriginals and introducing Workchoices in the first place.  Still, unphazed, Howard went about finding a wedge issue.  But Rudd was ready for him.  Anything that Howard tried to raise as a political trump card, Rudd agreed with him.  They shared a similar foreign policy.  A similar view on gay marriage.  A similar view on tax relief for working families.  Rudd outplayed Howard and handily won the 2007 election by a massive margin – what is referred to as a Ruddslide. 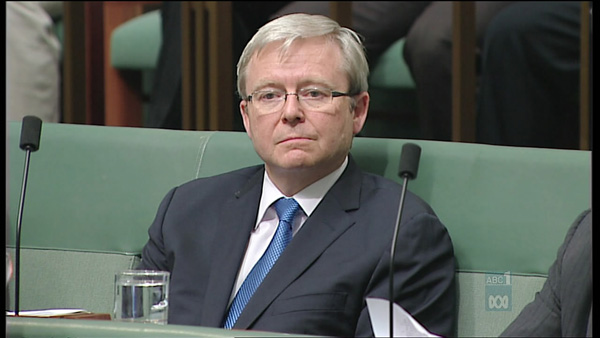 Two years into his term as Prime Minister, Kevin Rudd was ousted by his own party.  Rudd had a reputation for being a workaholic who micromanaged, was tempermental and wasn’t open to ideas from his colleagues.  Although they tolerated this during the initial honeymoon period, as soon as his popularity dipped in the polls, the party took action.  Y’see, Labor is a weird, fucked up political party that almost operate like the Freemasons.  Internally, there are clandestine factions, union leaders and kingmakers who hold influence that isn’t immediately apparent in their official job title.  ‘Faceless men’ removed Kevin Rudd from power and installed Julia Gillard as the new, unelected prime minister of Australia.

After establishing herself for a couple of months, Gillard called an election and went to the polls.  She would be running against Tony Abbott as leader of the opposition.  Abbott is likely the most rightwing leader the party has ever had.  Although not quite as extreme as today’s Republican presidential candidate, he still appears to have a values system based on a worldview from the 1950s or thereabouts.  It was clear the country didn’t want Abbott but they also didn’t like the way Gillard assumed power either.  The election produced a stalemate.  Neither party got enough votes to assume leadership so Gillard retained after brokering an alliance with four independant candidates.  This created an uneasy, gridlocked parliament where Labor are beholden to the special interest needs of the independants to stay in power.  Rudd meanwhile, stayed on in the party and was given the foreign minister position.

As the next eighteen months went by, neither Gillard nor Abbott got any more popular with voters.  Gillard actually slumped in the polls, with voters explicitly wishing for Rudd to return as leader of the party.  For his own part, Rudd never categorically denied that he would one day assume a fresh leadership challenge.

Earlier this month, when the rumour mill started firing up again, someone inside the Gillard camp leaked what was intended to be an embarassing video of Kevin Rudd, in an effort to discredit him.  It was Rudd swearing and banging his fist on a table during a recording session for one of his speeches.  The message for Labor members was clear – don’t vote for this guy because he is a short tempered loose cannon.

Rudd immediately responded by standing down as Foreign Minister and contesting the leadership of the Labor Party on Monday morning, February 27th.

The Newspoll results on the weekend prior told a clear message to Labor:

The party voted this morning at 10am and went…with Gillard.  So Australia still has a Prime Minister with a 26% approval rating and an opposition leader with a 31% approval rating.  We’re still stuck at the next election chosing between two mediocre leaders.  A turd and a douche sandwich.

I leave the final word with ABC journalist Annabel Crabb on this whole sorry affair.

In June last year, the deputy prime minister became the prime minister, for reasons that were not immediately clear to most outside the Canberra area. Stories are important in politics. And the gap in this story is grievous. How the gap developed is a tale in itself – a discouraging one, and scary too. Scary, because it involves (if what Rudd’s former ministers say privately is true) the disintegration of the processes by which the federal government makes the decisions that affect us all. Scary, because the men and women of the cabinet, to whom we entrust an awful lot, stood by and did nothing. Those men and women can’t and won’t tell that tale now. Can’t, because they fear aggravating their former prime minister, Kevin Rudd; won’t, because the whole episode reflects dreadfully on them all. And the finely balanced equation that keeps Julia Gillard in the Lodge – she is a woman constantly tensed in a multi-directional Mexican standoff, after all, one vote away from oblivion, unable to sack a minister or piss off a backbencher without threatening her own existence – gives Kevin Rudd immunity from prosecution too.

I wish Labor wasn’t so messed up.  I wish Tony Abbott wasn’t on track to become our next Prime Minister simply for being ‘Not Julia.’

Previous: On A Boat Outtakes
Next: The 84th Academy Awards