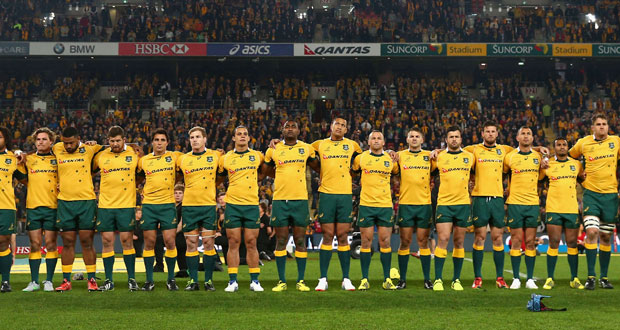 This week, the ARU is faced with a choice.  They must choose to dismantle either the Western Force or the Melbourne Rebels as an Australian representative in the Super Rugby competition as of next season.

There are two reasons for this.  Firstly, neither side makes money.  In fact, both lose money by the millions.  Secondly, there are not enough quality players to put together five competitive Australian teams in club rugby.  To be completely honest, there’s probably not enough good quality players to put together even three competitive teams.  That is how far Australian rugby has plummeted.  And there’s nothing to suggest the situation won’t continue to worsen.

Cards on the table time.

This is the state of Australian rugby as it stands today: 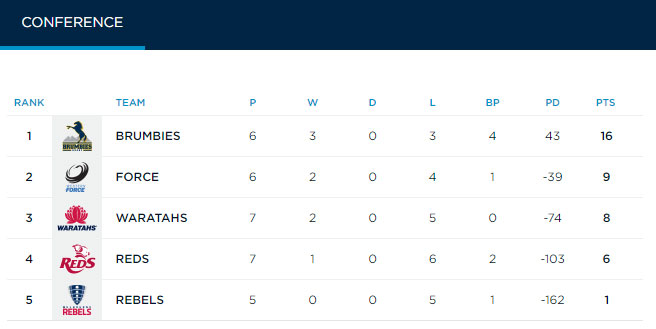 In the current Super Rugby season, Australian teams have lost twelve games against New Zealand teams and won zero.  One of the losses was an eye-watering 71-6 massacre of the Melbourne Rebels at the hands of the Hurricanes.  The Brumbies are the top Australian team and sit fourth in the ladder thanks to the magic of the conference system but they have the same number of points as the 10th placed team.  Not a single Australian team has won more than half their games. 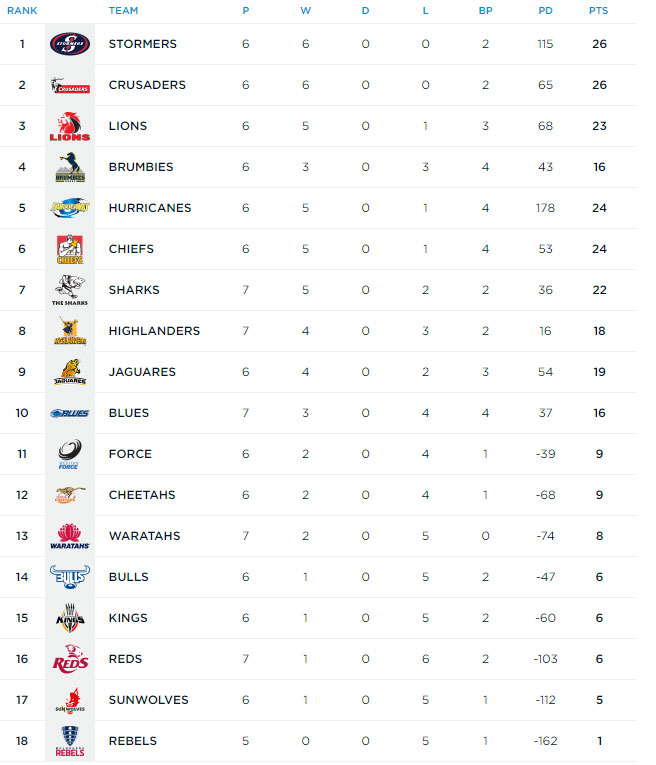 At an international level, the Wallabies are currently enduring one of their worst ever run of results against their trans Tasman rivals, the All Blacks.  They have won just 4 out of the last 30 games. 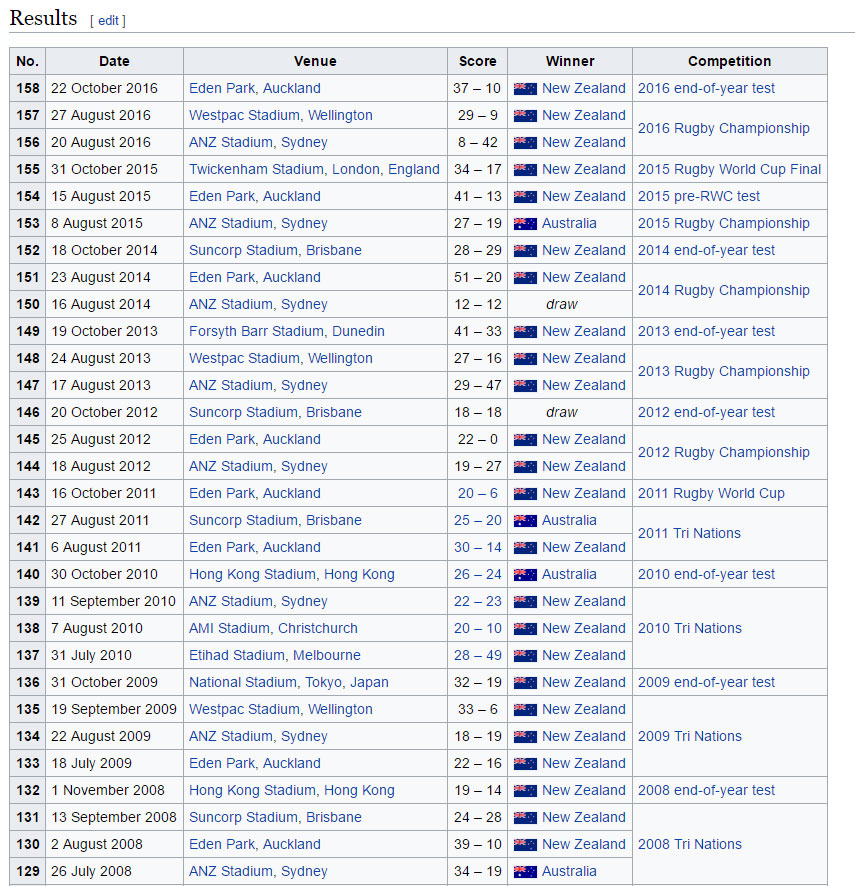 At a grass roots level, the game has had a seismic collapse in participation rates with men, women and children abandoning the sport in droves.  The number of people who play rugby in Australia is now a paltry 55,000, which makes it the 26th most popular sport in Australia, where it’s slightly less popular than ballroom dancing and just above archery. 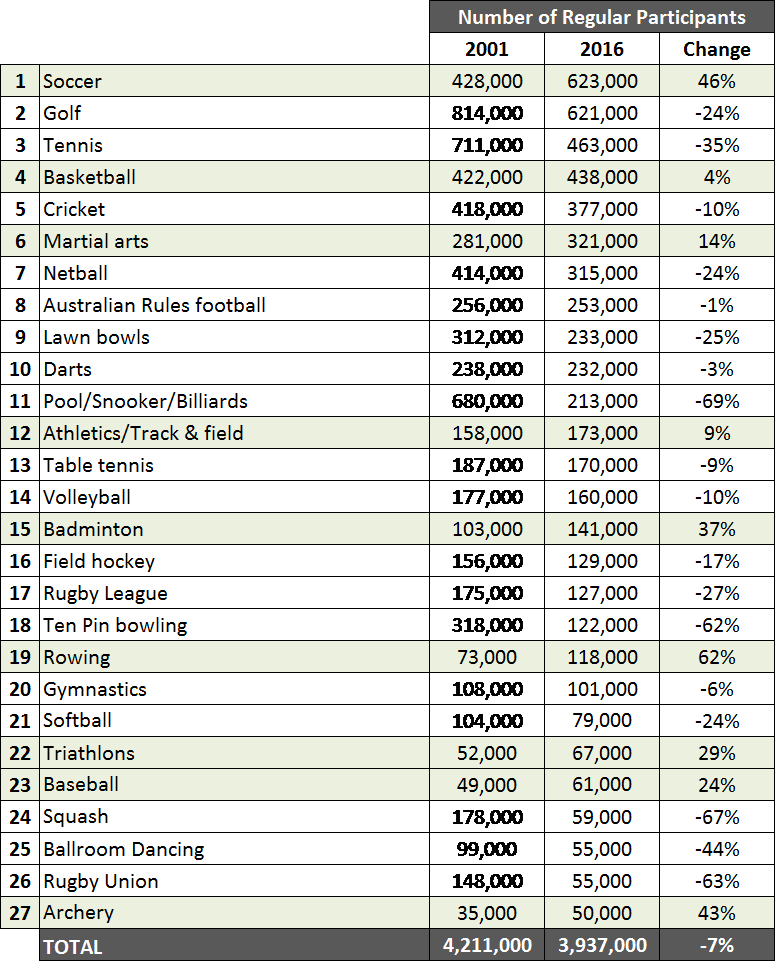 Roy Morgan Research data on the most popular sports in Australia

By virtually every other metric – tv ratings, attendances at games – rugby in Australia is shrinking and withering on the vine.  How did it come to this?  And what happens from here?

Why It Went Wrong 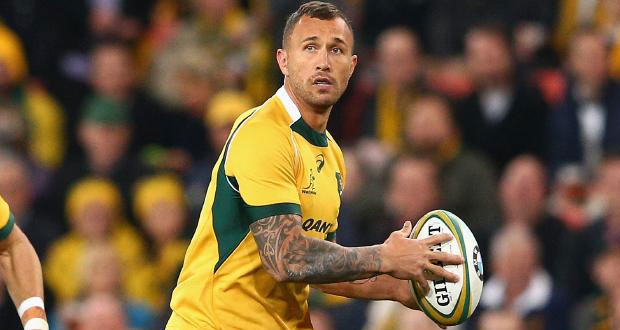 It’s tricky to pin point one key area that has lead to the downfall of rugby in Australia.  Tricky because almost every administrative aspect of the sport has been a colossal failure since the turn of the century.

Consider a young Australian kid today who adores rugby and might one day be interested in playing rugby professionally as an adult.

Firstly, they need to be male.  Whereas soccer, AFL and cricket have made great strides in recent years promoting domestic competitions for women with leagues that have national tv deals, rugby has (with the exception of a hastily thrown together Olympic Wallaroos squad) almost exclusively remained the domain of men.

If that kid wants to watch rugby on free to air television, he can watch the Wallabies get thrashed annually by the All Blacks in the Rugby Championship.  The Wallabies might fare a little better against Argentina and South Africa as they compete for second place in a four team competition.

Somehow, if that child still remains motivated to play rugby, they’ll be developed in the cash starved grass roots system that the ARU currently oversees.  Last year, an article in the Australian suggested that of the ARU’s $105 million dollar annual budget, $25 million was spent on head office salaries, $56 million was spent on the national team and $4 million was spent on growing the game at a grass roots level.  Of that $4 million, the vast majority of it is spent in Queensland or New South Wales so if you live anywhere else, you’re pretty much shit out of luck.

All of this of course, is assuming the kid lives in a bubble and isn’t wooed by AFL, NRL, Big Bash, A-League and practically every other major sporting code in Australia which currently does a superior job marketing their product to youngsters.

In short, the administration of Australian rugby is in a shambolic state from top to bottom.  The tv coverage of the sport is expensive, restrictive and airs at weird hours of the night.  What coverage there is shows Australian teams under performing badly.  Should a potential player still decide they want to pursue the sport professionally, there’s no money to develop them and they’re screwed if they live outside of NSW and Queensland.  The live audience for the sport is shrinking, the televised audience for the sport is shrinking and there are no young players coming through to improve the quality of the teams on the field.

The proposed solution by the ARU to axe one team doesn’t address any of the other issues affecting the game.

Where To From Here? 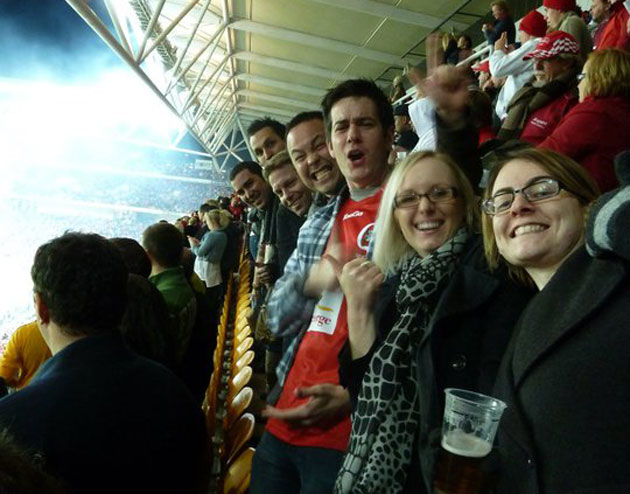 Where to from here?  Things will get much worse before they get better.

Until there’s a wholesale clean out of the current administrators of the game, its impossible to see a path to recovery for rugby in Australia.  All of these problems would be bad enough if they were occurring in a vacuum but the Australian sporting landscape is getting ever more crowded with other sports doing a far better job connecting with their audience.

It’s interesting to note that New Zealand has no vested interest in helping out Australian rugby.  The collapse in the quality and competitiveness of Australian teams both at a Super Rugby and international level has not hurt television ratings or attendances of trans Tasman matches.  In short, New Zealanders are happy to watch noncompetitive games where the Kiwi sides win by massive margins over their lacklustre Aussie counterparts.  If Australian rugby enters a malaise where they cease to be competitive in SANZAR fixtures, I don’t believe New Zealand rugby administrators would care one tiny bit.  It’s not like New Zealand sports fans really have anywhere else to turn.

At the height of my rugby fandom, I was a Queensland Reds season ticket holder and would stay up at strange hours of the night watching World Cup games and Wallabies tours of the Northern hemisphere.  Today, I am a lapsed fan.  I barely tune in the sport and am lucky to catch more than half a dozen games a year.

I want to come back.  I really do.  But rugby in Australia has been badly neglected by its custodians and where it stands today, it’s a very long road back.