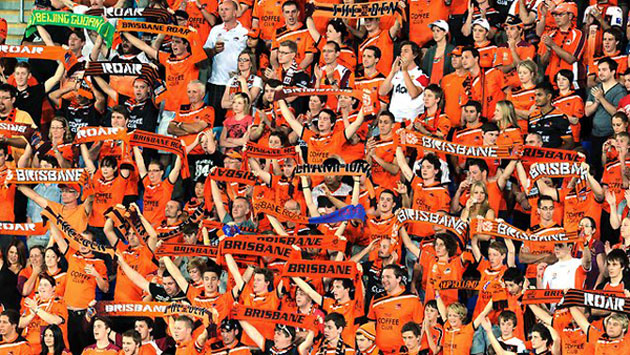 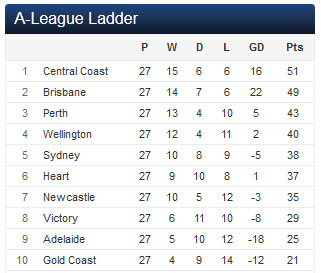 Brisbane Roar won their last game of the season against Gold Coast United who played what could possibly be their last game in the A-League.  But it wasn’t enough.  Earlier in the day Central Coast Mariners beat the Phoenix by the same scoreline to secure the Premiere’s Plate.  Well done to them.

It’s been a thoroughly enjoyable season with plenty of ups and downs.  It’s always exciting when first place in a league gets decided on the final day of the competition.  For Brisbane, the disappointment of finishing second place will sting.  For Central Coast, they will be elated – although rumours continue to build that coach Graham Arnold may jump to Sydney next year.  For the sides out of contention, I felt mostly for Newcastle who played with heart and were unlucky not to make the finals, beaten in the final round by Sydney FC who took their spot.  For Melbourne Victory, Adelaide United and Gold Coast, they haven’t looked like teams that deserved to be in the finals for a long time.  Adelaide for now appear to be sticking by their team, choosing to retain the services of John Kosmina who arrived as coach mid-season.  Melbourne Victory seem likely to keep new coach Jim Magilton but are expected to clear out a massive chunk of their current squad.  Experienced defender Roddy Vargas has already got the chop and more are expected to follow, including legendary goal scoring midfielder Carlos Hernandez.  Gold Coast had their owner Clive Palmer stripped of his A-League license.  It remains unconfirmed whether the club will fold or if a new owner will step in.  One of two things will apparently happen – either the club will be saved or the FFA will hurriedly create a new team for next season.

Now the attention turns towards the finals where for the second season in a row, the Roar will play against the Mariners in a two-legged series, with the winner going on to host the final.  History favours the Roar.  They haven’t lost to the Mariners at Gosford Park in twelve outings.  But the Mariners did beat the Roar at Suncorp this year and they will be tenacious.

The loser of that game will play the winner of a 4-way sudden death playoff series between Perth, Wellington, Sydney and Melbourne Heart.

I feel reasonably comfortable playing against the Mariners in the playoff to host the final.  I hope we win because otherwise I’ll have to travel to Sydney to watch the final.  I feel reasonably confident that we have the measure of every other team in the finals series…except Melbourne Heart.  We haven’t beaten them all year and they seem to have our measure.

The finals kick off this weekend: