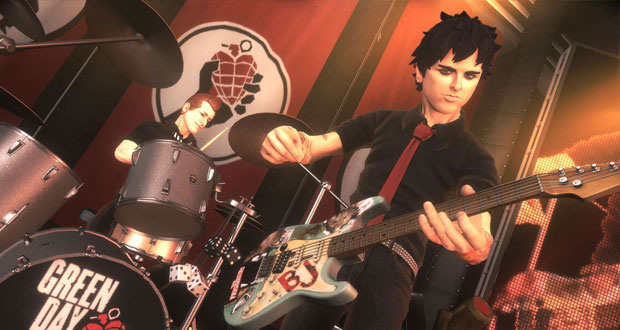 
I love the Rock Band franchise.  In fact, it has pretty much surpassed the Pro Evo football series as my favourite social game to play in this console generation.  Its a game that only gets better over time as you can continually expand your library of songs from the hardcopy disc releases to the additional downloadable tracks that come out weekly. 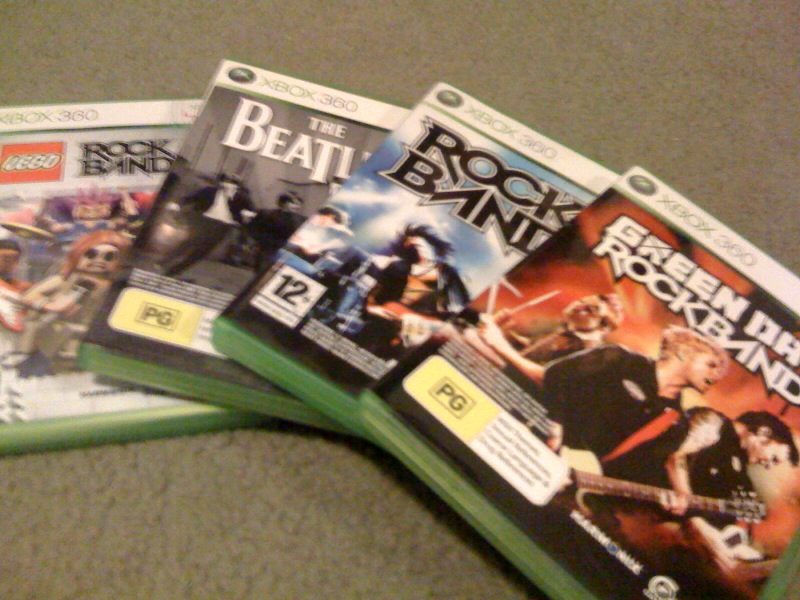 When you bundle all the various games together into a single playable compilation, I’ve personally amassed a collection of over 300 songs to choose from, including tracks from artists as wide-ranging as David Bowie, Queen, Kula Shaker, Dropkick Murphys, Rancid, Michael Jackson, Guns & Roses, Modest Mouse, Oasisand Flight of the Conchords.  Now, while this is just the third band specific disc release by developers Harmonix (AC/DC and The Beatles precede this title) I’ve come to terms with the fact that I will never get my Def Leppard Rock Band game, as the band are now about twenty five years past their prime.  Which makes Green Day Rock Band just about the best possible alternative for me and my musical tastes.

How does it hold up?

Initial impressions are a bit of letdown.  The setlist is disappointing in scope, skipping out on any pre-Dookie material.  Dookie, American Idiot and 21st Century Breakdown are represented in their entirety but then this comes at the expense of Insomniac, Warning and Nimrod only get a handful of tracks.  I didn’t really didn’t find the producers explanation that American Idiot and 21st Century Breakdown ‘had’ to be comprehensive in their tracklisting because they are albums that tell a narrative all that convincing.  These songs are played out of order in the Career mode and are interspersed with tracks from other albums so the reasoning doesn’t really ring true.

A lot of my expectations of what the Green Day Rock Band game would offer come directly from the format in The Beatles Rock Band.  That was a game that was constructed around the idea of the player reliving and learning about the careers of the The Beatles from their earlier years playing in Liverpool, through their big stadium shows in America and then the studio years which had excellently produced ‘dreamscapes’ to visualize the lyrics.  There is a real feeling of authenticity  in The Beatles Rock Band and the game was constantly throwing rare photos, audio excerpts from the recording studio, videos and pop up facts to supplement the experience.

Comparatively, Green Day Rock Band feels decidely barebones.  Perhaps the feeling from Harmonix was that half the price ($49 AUS at launch) could translate into half the effort.  Limiting the focus to 3 main albums and an equal number of backdrops means that the game doesn’t really come close to being a comprehensive look at the band’s career.  In its presentation, the game also doesn’t have any pop-up facts or rare audio and all the archival video footage is saved until you complete the game at which point they become unlockable bonuses for completing tasks in a Challenge Mode.

As you start out by playing through Dookie, the backdrop for the album is the fictional ‘Warehouse’ setting which feels completely bland and as authentic as its utterly generic name suggests.  At this point, I found myself wondering whether this game would have worked better as just some downloadable content.  It feels like a missed opportunity.  Chump doesn’t lead into Longview, they are kept as seperate tracks.  The crowd looks ugly, is filled with identical models and they go through the same canned handwaving gestures over and over.  Imagine what this could have been if it had been set at Woodstock 94 instead?

Surprisingly, its when the game reaches the Milton Keynes backdrop that it really comes to life and things start to come good.  As you play through American Idiot and a handful of goodies from Insomniac, Nimrod and Warning, the game suddenly does an incredible job of recreating the live Green Day experience.  This effect is helped by layering the soundtrack over a recording of the crowd reacting to them and singing along with the band.  When this comes together with the visuals showing thousands of fans and choreographed pyrotechnics to boot, the end result is the best video game recreation of a live act in any music franchise I’ve seen.

The character animations for the band members themselves are excellent.  Billie Joe, Mike Dirnt and Tre Cool all have very distinct body language when they play and the game creates a believable facsimile of them.  Theres also plenty of attention to smaller details, such as Billie Joe pointing to his pulse when singing the line ‘check my vital signs’ which I really liked.  The disparity in quality between the Dookie set in the Warehouse and the Milton Keynes section onwards is so great that it almost feels like two different developers have made this game.

The 21st Century Breakdown setlist played at the Foxtrot is equally strong.  It’s not my favourite Green Day album but when Harmonix are on their game, one of their well designed charts can make a song that you’re indifferent to fun to play.  And when its complimented by such strong presentation, as is the case here, it actually becomes a pleasure to play through.

In the end, Green Day Rock Band has enough innovations in its recreation of a live band to bring something new to the Rock Band franchise.  It has a disappointing open act but finishes very strongly.  There are still lingering disappointments over some of the missing tracks but hopefully this can be amended with future downloadable tracks.

Finally, Pat can play the solo from When I Come Around

Summary : The presentation is not to the same standard as The Beatles Rock Band. The song selection approach which invested almost exclusively on 3 albums was a weird choice too. 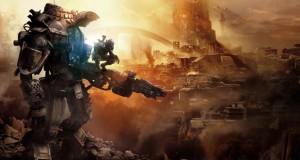