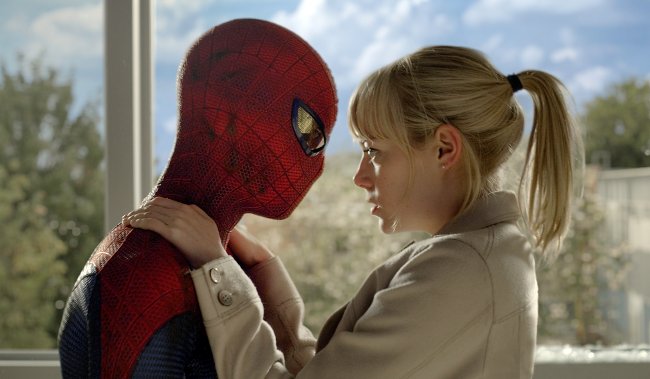 “The Untold Story”
– Tagline for The Amazing Spider-man.

Untold story.  Psssh!  You told the story already!  Three times in the last decade!  I suppose it’s a better tagline than ‘Another reboot, guys’ but it’s not particularly honest.

The Amazing Spider-man is a reboot that nobody asked for.  After the damp squib that the Raimi trilogy went out on, I think everyone agreed that it was probably best that we left the webslinger off the silver screen for a few years.  And yet here he is, back again with a rebooted origin story.

One of the many things that grinds my gears about reboots is that even when they are taking on a franchise as entrenched in popular culture as Spider-man, Superman or Batman, there is always the compulsion from the director to jump straight into doing another origin story.  I fully accept that all these characters will be popping up in movies for decades to come but instead of revisiting such well worn territory, why not make a Spider-man movie based on the Maximum Carnage storyline, or a Batman comic based on Arkham Asylum or a Superman movie based on Death of Superman?  Is it really so outrageous to assume that the audience knows how these characters came to be?

That said, let me talk about The Amazing Spider-man film for what it is and not what I think it should be.

It’s actually a pretty decent adaptation of the Spider-man character.  Wisely, director Marc Webb has opted not to retread the same ground as Sam Raimi’s Spider-man [2002].  In this version of the story, the Osbourne family are left offscreen, Mary Jane hasn’t arrived in Queens yet and the apple of Peter Parker’s eye is Gwen Stacy.

Parker himself is played by Andrew Garfield in a performance that is subtly different to Toby Macguire’s portrayal.  I think it boils down to Macguire being dorky whereas Garfield is nerdy.  This film goes to much greater lengths to display Peter Parker’s intelligence and passion for scientific discovery in this film, although he isn’t much better with the ladies.

Which leads in nicely to the tone of the film itself.  I always thought the Raimi trilogy did a terrific job recreating the colours, the mood and the melodrama of the original Stan Lee/Jack Kirby comics from the Sixties.  The films were light-hearted, playful and had a pleasingly irreverant tone about them.

Webb’s version of Spider-man feels like an interesting contemporary update on classic monster movies from Hollywood’s golden age.  Through Webb’s eyes, the camera lens lingers on the character’s physical transformation, as they metamorphosize from human being to arachnid-powered superman or lizard creature.  The film is like a mish-mash of familiar tropes from Universal monster movies: there are mad scientists that have noble goals but a corrupted heart, character mutations lifted straight out of Doctor Jekyll and Mr Hyde and a cacophonic finale that takes direct inspiration from King Kong.  I think its a good thing that Webb’s film feels more sci-fi than super hero.  If you’re going to remake a franchise that has only been rested for five years, at least go for something unique.

I didn’t expect this but ultimately, I think I prefer this version of Spider-man to Raimi’s.  Webb’s film hits all the right notes and I found Andrew Garfield and Emma Stone to be a much more enjoyable pairing than Toby Macguire and Kirsten Dunst.  It’s a shame the supporting cast couldn’t be expanded to include J Jonah Jameson but I was very happy with the performances from Martin Sheen as Uncle Ben, Denis Leary as Captain Stacy and Rhys Ifans as Doctor Connors.  I think only Sally Field gets the short straw as Aunt May whose character is a tad underdeveloped as a perpetual worry wort.

The more exciting prospect for me is what comes next.  Another origin story is all well and good but where do we go from here?  Spider-man is one of my favourite childhood comic book super heroes so I look forward to seeing what direction Webb and his team take the series from here.