When I was a kid, maybe four or five year old, I remember playing ‘Airports’ with my big brother Stu.  He used to have these miniature scale model airplanes and we’d set them up in various rooms of the house.  According to a schedule planned out by Stu, we would fly the plane from one room to another, where it would land at its new destination.  That was pretty much the extent of the ‘game.’

I don’t really remember us doing anything dramatic like having the planes crash or anything like that.  Just that every now and then, Stu would look at his watch and it would be time to fly one of the planes from one room of the house to another.  We did this diligently for some time.

Depending on how your brain is wired, this can be either a really cool airport simulation or it can be as exciting as watching paint dry.  I used to think I was in a pretty exclusive club of people who would find ‘Airports’ exciting but Nimblebit, the iOS software developer of the popular Tiny Tower game, has developed a game for the iPhone and iPad which is pretty much the digital version of this game.

Pocket Planes is a charming looking pixel-art game where you gradually build and expand your airport empire starting with a couple of pint-sized airports and a handful of planes that seat just one or two travellers.  From humble beginnings, you amass your fortune, add new planes to your fleet, purchase and upgrade new locations and customize your planes to suit your style.  But mostly…you just watch planes fly from one airport to another in a completely non-interactive fashion.  It’s become one of my favourite games of the year.  Even better, it doesn’t cost a cent.  Pocket Planes is free to play.

I like what Nimblebit has done with Pocket Planes.  The game isn’t really designed to be played for any sustained period of time.  Rather, you set your planes on their journey and then leave the game for a couple of hours or whenever you next have some free time.  I’ve fallen into a routine of playing this game for 5 minutes at a time at three stages of the day.  In the morning before I go to work, when I get home in the evening and then before I go to bed.  I’ve expanded my fleet so I’ve got eleven planes running flight paths that take anywhere from half an hour to over two hours.  It’s low maintenance and thats how I like it.

Of course, if that was all there was to it, then I think the game would become stale rather quickly.  Fortunately, there is plenty to give Pocket Planes longevity.  There are continously updating ‘challenges’ that refresh every couple of days that give you a particular destination to focus on.  For example there might be an earthquake in San Fransisco so you get bonus currency for flying medical officers there.  Or other times you might be rewarded with a unique plane that you can’t purchase through the ingame marketplace.  The game encourages you to join an online community when you do this.  I participated under the #SomethingAwful crew and generally reaped pretty good rewards.

Pocket Planes is a very simple game at heart but its something that wouldn’t really work on a traditional video game console.  The bit-sized nature of its playing mechanics make it ideally suited to iPhones and iPads where you can access the game quickly, fiddle around for a couple of minutes, then get back to whatever it was that you were doing.  I don’t know how long I’ll keep playing this game but for now, I’m happy watching my level bump up every two or three days and playing ‘Airports’ like I used to do when I was a kid. 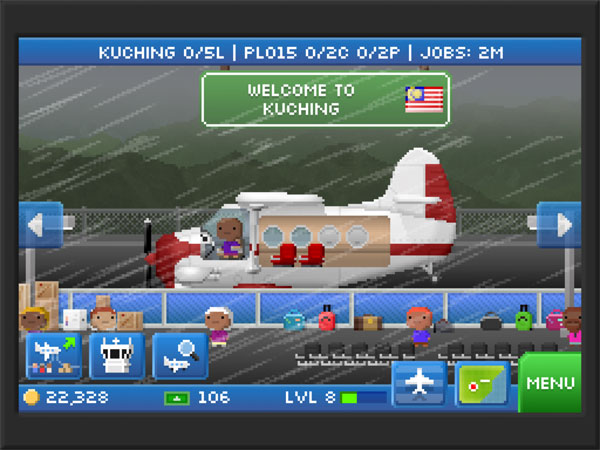 You start the game by operating one of the smaller airports in the world. I went with Kuching 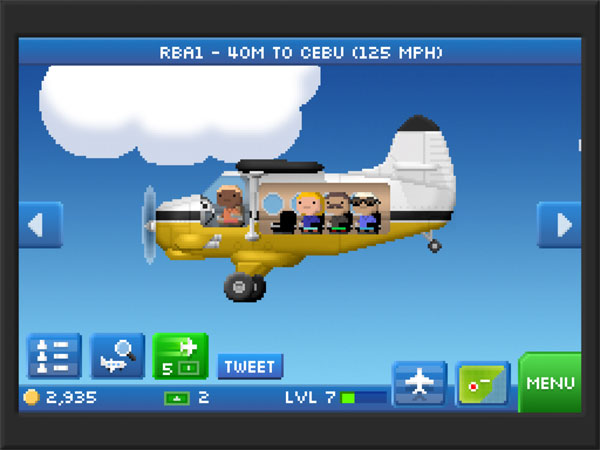 You can customize the paintjob on your planes and give them names. Most of my planes are modelled on the Royal Brunei Airlines fleet. 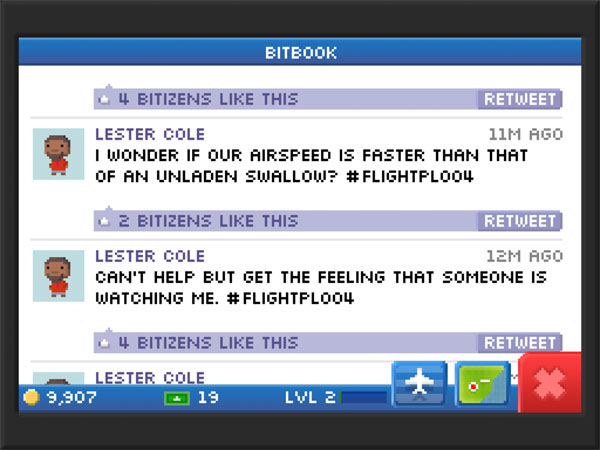 I appreciate Nimblebit’s dedication to making you laugh. The game has its own social network called BitBook that has some entertaining twitter-style updates. 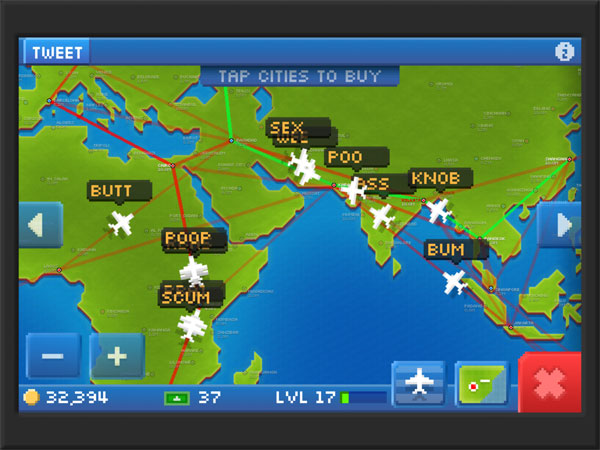 You start out with just a couple of airports but as you level up and get further into the game, you’ll expand to have a fleet that travels across the globe I have no idea whats going on here

Summary : Probably the only free to play game I have ever enjoyed.