A week ago, Labor was staring down the barrel of electoral annihilation in September.  Julia Gillard was somehow losing a popularity contest against conservative leader Tony Abbott who typically ranked at about a 35% approval rating.  Labor were looking at losing by ten points in two party preferred polls and that had been consistent for about six months.

So last week, Labor finally swallowed their pride, got rid of Gillard and brought back former prime minister Kevin Rudd.

How has that worked out? 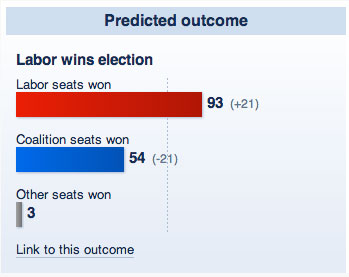 This week’s Morgan Poll has a twenty one point bounce for Labor and has them sitting at an election winning margin.  They are leading by 10 points in two party preferred.

Its the world biggest ‘honeymoon’ approval bounce I’ve seen since George Bush pre to post 9/11.  Somehow this election has gone from a guaranteed Labor massacre to a victory within their grasp.

Can they keep their shit together for two months?  Time will tell.