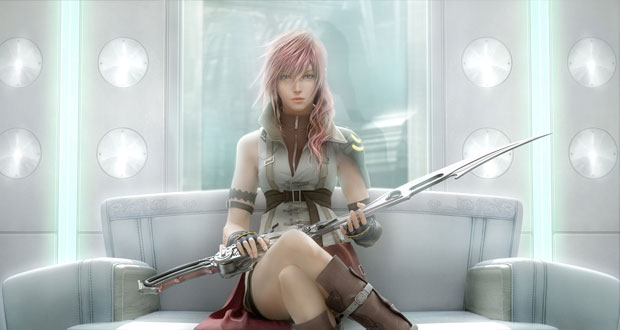 
You could make quite an interesting case study exploring how the role-playing genre has changed in this current generation of video game consoles.  It has seen a cultural shift as the popularity and critical acclaim for Western RPGs have begun surpassing Japanese RPGs.  Many RPG staples have started to appear in other unlikely genres such as first person shooters.  And yet RPGs themselves, which have typically been adverse to change, suddenly find themselves rapidly adapting to capture a wider and more casual marketplace.  With Final Fantasy XIII, one of the most widely recognised and beloved RPG brands, SquareEnix has also has radically changed their traditional template.

Some of the Final Fantasy trademarks are still there.  Chocobos, Moogles, airships and summons are all here.  Gone however are towns, NPCs, experience points, controlling multiple characters and world maps.  That said, I’m reluctant to say that Final Fantasy has ‘gone casual’.  I completed the game with the internal clock registering 56 hours of play which is anything but a casual commitment to a game.  I will say instead that Final Fantasy XIII has been significantly streamlined and taken a highly unusual approach to its game design which I’ve not really seen before.

As the game begins, the first ten (out of thirteen) chapters of the game are rigidly linear.  Linear in almost every sense of the word.  Not only is there just a single path for the player to travel along, this path is often bears down an absolute straight line.  The player also has no choice in controlling which character they choose to play as.  The combat system is initially so constrained that it is possible to progress through the first few hours of the game simply by mashing the ‘x’ button on everything.  Final Fantasy XIII‘s opening ten hours may qualify as the world’s longest video game tutorial.

Once the player reaches the eleventh chapter however, the game suddenly opens up and presents the player with control of all six characters and an open world with over sixty sidequests which can be accessed in almost any order.  The game then encourages the player to upgrade their weapons and accessories using a combination of natural and mechanical items collected in the game world which require a mathematical formula and a detailed GameFAQs guide to work out the most effective way to level them up to their maximum.

To use a culinary analogy, its like Square have served you an entree which they expect you to eat for an hour and then after that they’ve served you the mains, sidedishes, dessert, drinks and petit fours all at once on the same plate and said ‘enjoy’.

I have no idea what sort of wider audience they think this game will capture and its alienating game design is reflected in the mixed critical reception its received upon release.  The game is far too complicated from the eleventh chapter onwards for a newcomer to keep up with.  Yet, by having such a simplistic approach to the game’s introduction and by scrapping so many staple RPG elements, they lose the support of traditional Final Fantasy fans also.

While I do think the game is likely to disappoint or confuse many players, I can also put my hand up and say that its the most enjoyable Final Fantasy that I’ve personally played in years and the first one since FF7 that I’ve bothered to play through to completion.

It was a hard slog initially.  Those first couple of hours in particular, are brutal.  I found the characters to be almost insultingly simplistic and some of the clunky dialogue is difficult to sit through.  Characters verbalise their emotions rather than express them.  One of the characters, Vanille, who appears to be constructed out of the absolute worst of Japanese anime stereotypes, was particularly grating.  Her character narrates the game with some wishy washy babbling about human nature and then as the story unfolds, there is a complete disconnect between her narrative voice and her behaviour during the game.  In the narration, she is somewhat coherent.  In-game, she appears to suffer from a severe social disorder that causes her to act like an overly cheerful mongoloid.  Early in the game, a character’s mother dies to which she cheerfully spouts off some playground banter and then skips around in front of the bereaved.

The opening chapters also struggle with jarring inconsistencies in the game world.  The quality of the character models vary from cutscene to cutscene and there is a complete disconnect between the interactive parts of the game and the cinematics.  In the cinematics, the leader of a rebellion Snow hides behind cover to avoid the gunfire of enemy troops.  In-game, this same character will get hit with a faceful of gunfire for a measly couple of hit points.  In the cinematics, Hope is a young boy who’s caught up in a conflict and is in way over his head.  In-game, he’s probably one of the most useful fighters.

However, over time, the game won me over.  Once you get full unrestricted access to the combat system, it is the best I’ve played in any Final Fantasy game bar none.  The ‘Paradigm’ system, uses different combat styles focusing on traits such as attacking, defending and spell casting and then allows the player to assign these to their own player as well as the AI controlled partners.  This means that rather than micromanaging each individual action, the player is more broadly controlling the behaviour of the character as they queue up multiple actions.  The combat system then allows you to switch these different paradigms mid-battle, adapting to the conditions of the fight at hand.  Its difficult to explain but is hugely satisfying to play.

The game world also really comes into its own after chapter eleven.  Gran Pulse is a fantastic environment which is populated with hundreds of interesting creatures and fauna.  The sidequests are fantastic fun to play through.  There is plenty of imagination shown in the creature design and the game delivers some of its most entertaining diversions during these sidequests.  One mission starts with a cutscene showing off a vicious snarling creature full of tentacles and teeth.  Out of nowhere, a pint-sized Yoda look-alike casually strolls onto the screen, knifes the creature and engages you in the fight instead.

Final Fantasy XIII is Square’s attempt at modernizing its most beloved franchise.  Its certainly had a change in tone from when I first played Final Fantasy VI, my first experience with the series.  One of the closing lines of dialogue at the end of FF XIII is a character telling their sister ‘congrats’ and then this leads into the closing theme song sung by a popstar from the British reality tv show The X-Factor.  Its not a game I would recommend to everyone but personally I thoroughly enjoyed what Final Fantasy XIII had to offer.

Not sure what kind of fantasy they had in mind when they made the character Vanille.

Summary : After a long wait, the end product is a mixed bag. There is a solid game buried in there but its bogged down by a dreadful first half.

Previous: UK Election 2010 – The Dating Game
Next: Professional Sports In the Modern Era Is Really Depressing