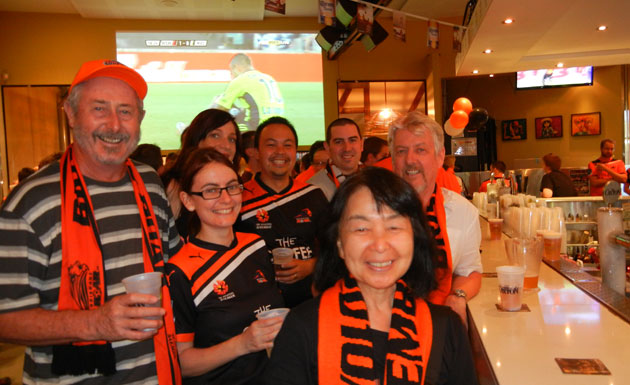 The photo above was taken at the Caxton Street Pub from the January 2nd game against Wellington Phoenix.  My parents were in town and got to see a cracking game of football where we won 2-1.  It was great to see the Roar pick up the win but the highlight of the game was clearly Jeremy Brockie’s goal for the Nix which he scored from about 30 yards out.  I’m glad my parents were fortunate enough to see the Roar when they were showing a glimmer of form.

You see, it’s been a season to forget.

The Roar started the 2012/13 season as back-to-back champions and although we had lost the services of mercurial coach Ange Postecoglou who left for the Melbourne Victory, we promoted our assistant coach Rado Vidosic, who had been hailed as ‘the brains behind the operation’ for the success we’d seen in the last two years.  Even better, we had managed to secure the services of almost every major player in the team from last season, except for central defender Mohammed Adnan who returned to Bahrain.  The foundations were there for another big year.

Sixteen games later and the Roar have lost more games in half a season that we did in the whole of the last two put together.  We are one point from the foot of the table.  The team moral is in the toilet.  We sacked Rado.  But we did it by pretending we were giving him a promotion to a job where he looks out the window (‘technical director’ I believe is the official term).  Our new coach Mike Mulvey has lost 3 from 5 and hasn’t been able to improve the discord that is so evidently running through the team.

Where did it all go wrong?

It seems clear that far and away the biggest impact for the Roar is the loss of Ange Postecoglou who is now working minor miracles to turn Melbourne Victory from the league whipping boys of the last two seasons to genuine title contenders.  Meanwhile, our players seem at one anothers throats, petulant and at times, lazy.  The biggest culprits of this new-found bad attitude seem to be Mitch Nichols and Erik Paartalu, both of whom seem very hot and cold with their form and perenially linked to moves overseas.  At this stage, its understood that Paartalu may well have played his final game for the Roar, a forgettable 1-0 loss to the Jets, and is likely off to China in the January transfer window.

The other problem facing the Roar is a lack of squad depth which allows the players to have sub-standard form and get picked week in, week out.  The biggest failing was obviously the lack of a suitable replacement for Mohammed Adnan, who was outstanding last season in the centre of defence.  We relied cruelly on Matt Jurman, a young Sydney defender who is just terrible.  And I genuinely believe a single bad player, one who genuinely a standard below the rest of the league, can make a difference.  Remember Adelaide United when they had Andy Slorry?  We scored seven goals running past that joke of a player a year ago.  Jurman conceded penalties numerous times with clumsy challenges and was caught badly out of position almost every week.  It’s impossible to gain any momentum with such a liability in the backline.

The changes are coming but they’re going to be slow.  We’ve signed Soccerroo Jade North to bring some much needed experience to the defence.  With North in the centre of defence and Roar Youth League youngster Donachie come off the bench, that will hopefully be the last time we need to see Matt Jurman wearing Roar colours.

We still are in need of a genuine goal scoring threat to pair up with Berisha.  He scored 23 goals last season but surely we’d be wiser to share the responsibility as we did in the season before when we had both Kosta Barbarouses and Juan Carlos Solozarno scoring double digits.

The biggest change needed is the change in attitude.  The 1-0 loss to the Jets last weekend might not stand out on paper in a string of 1-0 defeats we’ve had this season but lets not mince words:  it was the lousiest game of football I’ve seen the Roar play since 2009.  The players seemed lazy, disinterested and sloppy.  So bad was the performance that Fox Sports is reporting a ‘crisis meeting’ was held after the game to try and figure out what is going wrong and how to put the pieces back together.  They needed it.  It was the sort of game that if it was in front of a home crowd, I’d expect an apology from the captain and coach.

The good old days of back-to-back grand finals seem a long way away now.  There’s work to be done.

Previous: TV Show Round Up: Survivor: Fans vs Goats
Next: Blogs From America – Los Angeles