After years and years of brainstorming and research on what i wanted for my first tattoo, I finally just went for it and had it done on Saturday.

Initially, I wanted some deep and meaningful design- i just couldn’t decide if i wanted something for my family or something that combined elements of all things close to my heart.

In the end all these ideas were getting me nowhere. I was overthinking it and I decided to keep it simple. I remembered all the stuff I used to enjoy in my art classes and how much i loved sketching stuff with heavy lead pencils. Knowing I wanted a back piece, I wanted a bird in flight with a falling feather, something that went with the contours of my back.

And that was it. My decision was made.

Awhile ago, a friend of mine gave me the contact details of his then girlfriend who has done some awesome work, and works in a great place called Jolie Rouge. So, the consultation came and went, and then D-day (or T-Day?) was made for Saturday. On the day I made the decision to make it bigger.

So she shaved the area it was going and transferred the stencil onto my back. At this point I had to remove my bra and tie my t shirt up into the smallest crop top I could manage. I got to lie down on my front on a massage style looking table and then that was it! No turning back!

I had heard horror stories about people fainting and feeling woozy when they got tattooed- which I was a little worried about. I’ve always thought I’ve had a high pain tolerance, but you just never know! When Charissa started the outline I won’t lie. It hurt. Alot. But it was actually quite bearable after a while. In fact, I nearly dozed off after I used to it.

But then she got towards my spine…thats when the teeth gritting started. That bit was excruciating! The worse part was being unable to naturally tense up and forcing yourself to make your body relax. The area near my ribs was a bit mental- it was a crazy ticklish pain. I had to laugh a couple of times. An hour and a half later, the outline was done.

I was meant to get it all done in one sitting, but when she changed needles to start shading it, I had to stop and tell her I couldn’t last anymore- and she was completely cool. I didnt want to say that I also freaked out a little when I saw her wiping my back and caught a glimpse of my blood all over the wipe! I got wrapped up, still bra-less and hanging loose, and sorted out a date for 2 weeks time to come back for the shading.

There wasn’t any pain at all once the tattooing had stopped. In fact the only discomfort I felt was the humidity of the afternoon! I have to say that walking home felt really weird without my usual underwired support. I can see (or feel?) the appeal the hippies had in the 70’s.

So..here’s the pic of it so far. You try taking a picture of your back. Its hard. 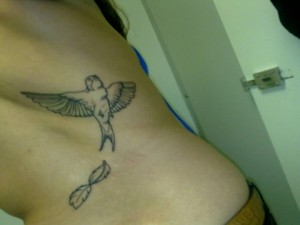