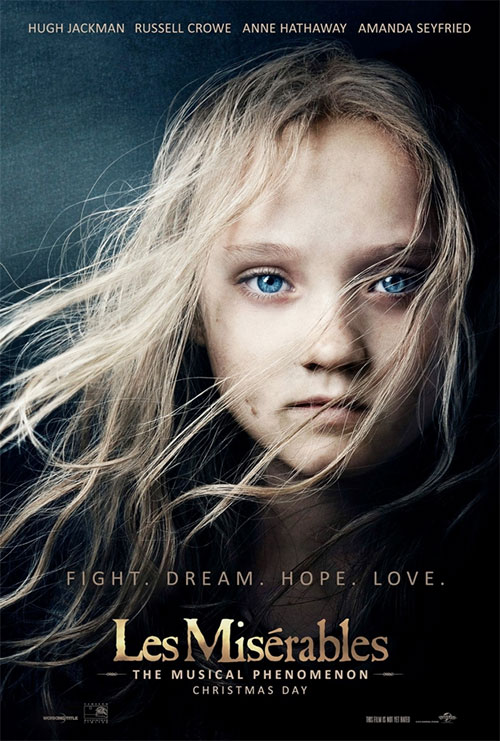 People can come at a new film adaptation of Les Miserables at a number of different ways.  The musical is a staple of Broadway and West End and there will be those in the audience who sing along and know every line and every wrinkle of the screenplay before the film even starts.  Others still might be familiar with past cinematic adaptations and others still might have read the book.

I fall under the camp that has somehow never come across a single iteration of Les Mis.  Not even a high school musical production (they did Fiddler On The Roof).  So I didn’t know where the story was going or what any of the tunes were.

The first thing anyone coming in fresh to Les Mis will notice is that it is a musical in the purest sense.  Every single line of dialogue is sung.  This is far removed from most musicals I’ve seen where I’m used to a couple of scene-setting lines of dialogue before the song and dance numbers kick off.  It takes a minute or two of getting used to.  When we first see Russell Crowe and Hugh Jackman, they lyrically sing out their lines of exposition which are pretty much just that.  I was expecting something a little more fanciful but a lot of the time they’re literally singing their name, their relationship to the other character and where they’re heading to next.  “My name is Javerrrrt.  I don’t like you muuuuuuch.  Okay, now I’m going to head into town and pick up some milk on the way hoooooome.”

Poor old Russell Crowe.  The guy copped some flack recently for his wobbly accent in Robin Hood and here he is now singing opposite Hugh Goddamn Jackman.  It’s a thankless task.  I like Russell, I do.  But I think he needs to fire his agent or whoever it is that lands him these roles that do not play to his strengths at all.  He’s not horrible as Javert, a quasi-villainous army general.  It’s just that Hugh Jackman, as the saintly Jean Valjean, is an order of magnitude better.

Once the story unfolds, we learn that the prisoner Jean Valjean becomes a successful businessman and is kind to his workers thanks to a lesson he learnt from a forgiving priest when he first escaped prison.

The story then introduces the unfortunate Fantine, played by Anne Hathaway, who has the brutal and thankless 20 minutes on screen since Gwyneth Paltrow in Contagion.

One thing leads to another and we get a full scale civil war on our hands in France as the young and sexy Marius leads a rebellion against French aristocracy.

The tone of the musical is mostly straight faced and sombre save for a comedic turn from Sacha Baron Cohen and Helena Bonham Carter as the Thenardiers, greedy and penny pinching pub owners who lurk in the background of the story scamming everyone they can for money. 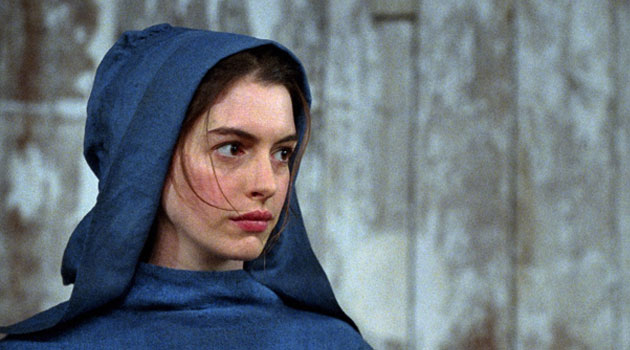 There is also an unintentionally funny story involving the Thenardiers’ daughter Eponine, a well meaning girl who is hopelessly friend-zoned in her relationship with Marius.  Marius is utterly blind to her advances and worse, he uses her to get to the apple of his eye – the comely Cosette.  I understand this love triangle isn’t intended to be funny and perhaps this is reflective of the source material but Eponine really does go above and beyond what would reasonably be expected to show her love for Marius and the guy doesn’t notice a thing.  And the worse Eponine’s situation became, the funnier I found it.  Marius seems to be the worst kind of oblivious jock for the Plain Jane Eponine to fall in love with.

I slightly disagree with a creative choice that director Tom Hooper made when it comes to the shooting of the songs however.  To really emphasize and sell the fact that the actors are singing on the set, he plonks the camera down right in front of their faces and for most of the big musical numbers, the camera is sitting idle staring at the performer in a tight close up.  I understand that authenticity is key for Hooper but I feel that the benefit of watching a cinematic adaptation over an on-stage musical is that you can be more dynamic in the presentation of the songs.  Sure, its great to get a close up of Anne Hathaway singing her heart out but I don’t see the harm in juxtaposing it with some long shots or cutaways to imagery that reflects her singing.  Only in the comedic Master of the House and the big finale does Hooper get a bit more ambitious with the cinematography.  The only other nitpick I had was the unusual choice to give the cast over-the-top cockney accents.  I understand that giving them outrageous French accents would be equally silly but it seems an odd choice to opt for a dialect that is so distinctly English.

Les Miserables doesn’t have the resonance or significance for me that it has with some other people but it didn’t stop me from enjoying this production.  Most of the performers other than Russell Crowe really impress with their vocal talent, particularly Anne Hathaway and Hugh Jackman.  The songs are catchy, the costumes are great and despite a running time of 158 minutes, it flew by and I had fun taking in the spectacle.

Summary : I found plenty to like about Tom Hoopers adaptation of the famous stage production. Hugh Jackman's performance was certainly a highlight. Even some of the film's miscues - such as Russell Crowe's singing - took on an odd charm of their own after a while. 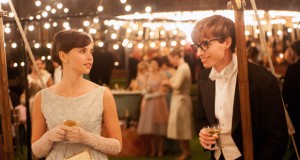