Don't Miss
Home > Film > The Theory Of Everything 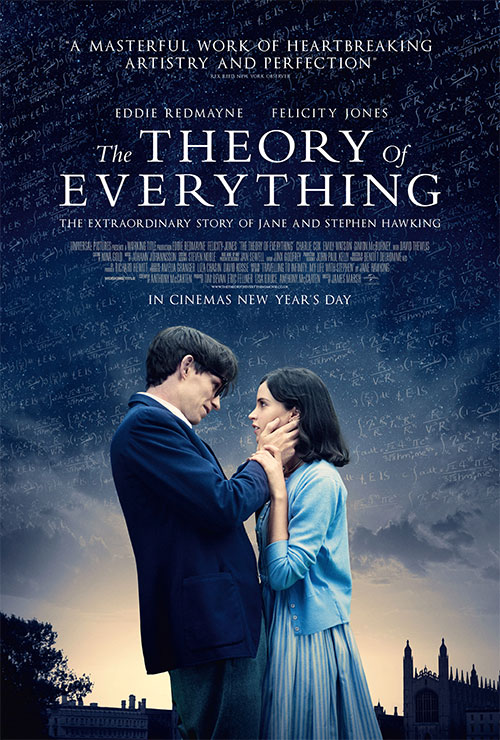 Stephen Hawking is a social enigma.  He has been a fixture of popular culture for three decades and is one of the most recognizable faces (and voices) of the scientific community; the personification of academic brilliance.  Yet few people have actually read his most famous work A Brief History of Time and most people would know next to nothing about the man himself other than the fact that he is afflicted with Motor Neuron Disease.

I can personally recall a few snippets of information about his private life that were published in the papers.  He is reportedly a devotee of the strip club Stringfellows in London.  He made a bet about a black hole theory with a fellow physicist where the winner would get an annual subscription to Penthouse magazine.  There was talk that his second wife was abusive towards him and purposefully left him outside on a scorching hot day.  These brief nuggets of information hinted at an eventful and intriguing life.  The Theory of Everything is a film based on the memoirs of his first wife Jane.  It pulls back the curtain and gives us some insight into what makes the man tick.

Stephen Hawking met Jane Wilde at Cambridge University in the Sixties.  He was a science major.  She studied poetry.  He was an atheist.  She was a member of the Church of England.  He was awkward, shy and bashful.  She was lively, vivacious and confident.  Their meeting at a campus party seemed very much a case of opposites attracting.

They are portrayed by Eddie Redmayne and Felicity Jones who both deliver exceptional performances and have a natural chemistry together.  The scenes of their courtship give us an idea of what made them such a strong couple.  They both show a zest for life and are passionate about their interests.  They have an innate curiosity about the beliefs of one another and Hawking’s introverted personality and physical vulnerabilities are complimented by Wilde’s supportive and nurturing nature.

Hawking struggles with his physical ailments from a young age and he collapses in the university courtyard and is diagnosed with MND at twenty one.  He is given just two years to live.  It is only when Stephen is diagnosed that Jane realizes the extent of her feelings for him and she commits herself wholeheartedly to being a part of his life.  Jane forcefully brings Stephen back from the brink of depression and the life of a recluse and encourages him to achieve his full academic potential.  They marry and soon after, have two children.

Going back a second, the scene in which Hawking has his motor neuron disease diagnosed by the doctor, he is given a terrifying list of ways in which his body will cease to function.  Upon hearing this, he inquires about the state of his mind.  He is assured that he will retain all his mental faculties.  At the time, I believe Stephen intended the question to be directed towards his capacity to strive towards his academic and scientific pursuits.  What becomes clear as his life unfolds is that it also means that his emotional and sexual desires remain as strong as they were in his days as an able bodied young adult. 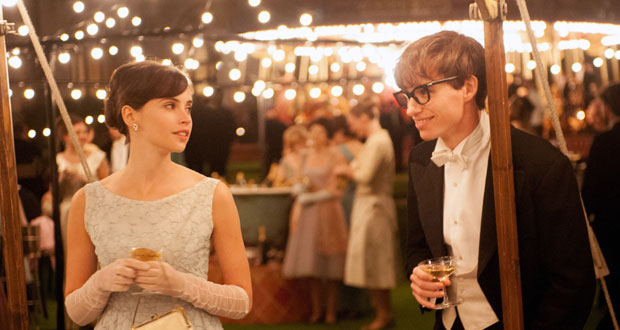 What sort of lifestyle does one live as a world class astrophysicist?  Before Hawking found literary fame with A Brief History of Time, it was a frugal and challenging existence.  Jane is effectively the caretaker of not just her husband but her two children also.  They have little money and although Jane loves and cares for Stephen, she reaches a point of physical exhaustion and emotional numbness.  The young woman who pursued her own interests learning about languages, literature and history seem far, far away.  In a pivotal moment, her mother has a cup of tea with Jane and suggests that she reinvigorate herself by joining the local church choir.  It’s there that she meets Jonathan, a handsome doe eyed widower.

Jonathan is invited into the life of the Hawking family, where he not only leads the church choir that Jane sings in but he also begins to tutor the children with piano lessons.  Stephen and Jane realize they need the support of a full time carer and with Stephen’s reluctance to be near doctors or hospitals, they bring Jonathan closer into their lives.  After twelve months pass, Jane gives birth to a third child.  Stephen and Jane’s families are rather dubious about the father of the child and faced with this intolerable scrutiny and his own developing feelings for Jane, Jonathan ends his association with the Hawkings.

If joining the choir and meeting Jonathan was the impetus for lasting change in Jane’s life, Stephen’s moment comes not long after.  He is rushed to hospital after contracting pneumonia and a tracheotomy is performed on him, taking away his ability to speak.  As part of his rehabilitation he is given his now famous voice synthesizer and he is introduced to Elaine, a new carer that instantly connects and builds a strong rapport with Stephen.  Two monumental changes occur in Stephen’s life.  Firstly, the digitization of his speech allows for him to write efficiently, which paves the way to A Brief History of Time, the work that made him a household name and gave him the financial stability to fully support his family.  Secondly, his speech therapy and bonding with Elaine brings him and Jane to the realization that their marriage has run its course.  At the very end, Jane tearfully tells Stephen that “I have loved you and I tried my best.”

I think the Guardian’s review of this film put it most succinctly when it stated that The Theory of Everything is “everything but the theory”.  It is not a film about cosmology or theoretical physics, but a film about love, marriage and family.  Hawking took a pragmatic approach to his own work, constantly evolving and challenging his own theories over time.  Ultimately, he and Jane took a similar approach to their life, choosing to end their marriage but salvage their partnership and friendship when they realized they had romantically grown apart.

I’ve read the odd sniffy review of The Theory of Everything (most notable by Christy Lemire on Roger Ebert’s website) that challenged the film for being ‘overly respectful’ and too saccharine towards its subjects.  ‘Oscar bait’ in other words.  I think that strikes me as needlessly harsh.  Certainly, a film based on the memoirs of one of the central characters is going to colour the portrayal of their relationship in a certain way but I think the film deserves plenty of merit for its exploration into the differing spiritual beliefs of Stephen and Jane, not shying away from showing the sexuality of a disabled person and recognizing the roots of what drove both of them to infidelity.

The Theory of Everything is an easy film to recommend.  I think the film offers plenty of insight into the life of one of the celebrated scientists of the modern era and the performances by Felicity Jones and Eddie Redmayne are both exceptional.  Redmayne is unerring in his ability to capture the sharp wit and wry personality of Stephen Hawking, not to mention the confronting manner in which he portrays the physical breakdown of Hawking’s body.  Jones takes the role of Jane Wilde and really shines.  She sidesteps the pitfalls of playing a one dimensional ‘long suffering, devoted wife’ and shows plenty of other dimensions to her character such as her spirituality and sexuality.  It is plain to see that without Jane’s tenacity, support and conviction, there would be no Stephen Hawking as we know him today.

Summary : An engaging, warts and all film about the marriage between Stephen Hawking and Jane Wilde. Eddie Redmayne and Felicity Jones both deliver career best performances. 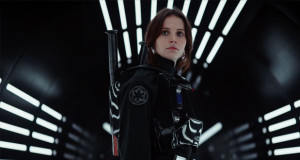