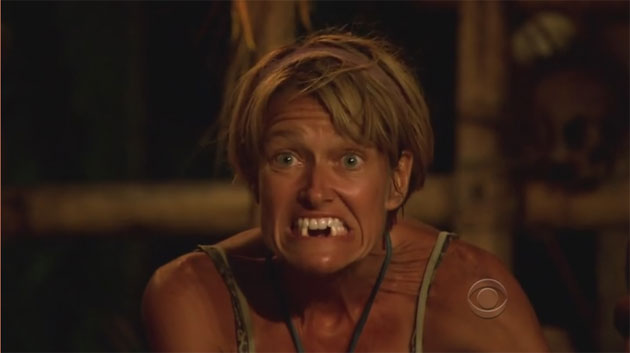 “Show me your teeth!”

I don’t quite know how it came to this but here we are at the final tribal council and there is a contestant badgering Dawn, an elderly Mormon mother of six, to take out her false teeth so she can reveal her insecurities on national television as penance for voting someone off.  That’s reality tv I guess.

It probably wasn’t even the weirdest thing we saw in Season 26 of Survivor which was one of the most competitive seasons the show has seen in recent years.  The casting agents did a fantastic job this season of finding a solid mix of genuine fans of the show that tried to implement some form of strategy that may have incorporated the styles of past performers (Boston Rob, Russell Hantz) or come up with something entirely new (Cochrane, the most unlikely challenge monster).  Even though the final vote was a bit of a blowout, it was a fun show from start to finish and caps off a nice bounce back after the awful Survivor: One World.  I haven’t been this happy with a winner since Yul Kwan.

The season will likely be remembered for Brandon Hantz’ meltdown at his camp and for the toils of Brenda.  Brenda basically took on the Biblical role of Job in this season of Survivor.  She won a Survivor auction only to discover her mystery item was sheep brains.  She won a challenge only to be put in a position where she had to give up her prize to keep the tribe happy.  Then they voted her off anyway.  And then she lost the Fan Favourite vote by 1%.  Thats a pretty rough trot!

The next season of the show teased a Blood vs Water format which suggests some sort of family dynamic.  It’s possible that CBS’ sister show The Amazing Race might give us an insight into what this might look like: We don’t have too long to find out.  Season 27 of Survivor airs in September.

I was a fan of the Stephen King novel that was released three years ago.  Hopefully it translates well into a tv show.  It probably won’t.  The trailer kind of gives off the same stink as other recent failed network tv blockbusters like Revolution, The Event and Flash Forward.  But we’ll see.

Tagged with: Arrested Development Stephen King Survivor Under the Dome

Previous: Space Oddity: The First Music Video Filmed In Space
Next: The Art of Buying A Car