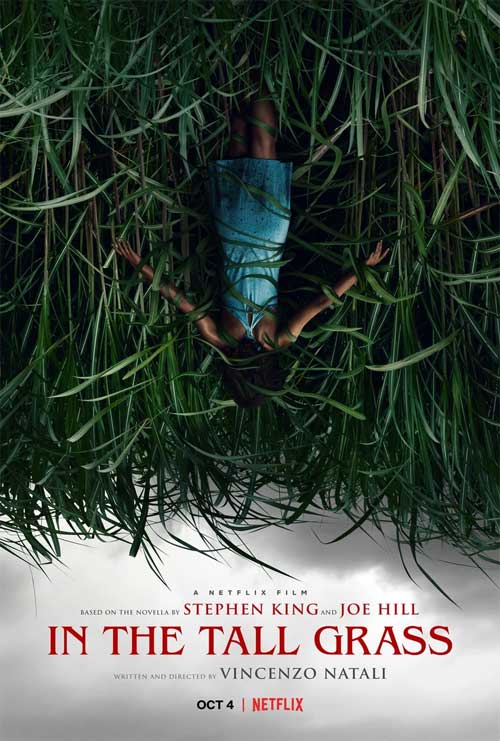 The film begins with siblings Becky and Cal driving to San Diego.  Becky is pregnant.  They are driving in a remote rural area and stop for a break at an old dilapidated church.  Next to the church is a field of tall grass.  A voice calls out to Becky and Cal.  It’s a traumatised young boy.  He says his name is Tobin and he is lost.

The siblings hem and haw for a second and then decide to help him.  They step into the tall grass.

And that’s where the trouble begins.

Becky and Cal soon find themselves lost in the tall grass too.  They can hear one another but they feel disoriented.  One moment they sound metres apart, then they sound miles apart.  In the film’s best scene-setting moment, they try jumping up and down with their arms raised to spot one another.  They do it once and they’re ten metres apart.  They try again the very next second and inexplicably, they’re fifty metres apart.  Just what is going on?

Then, to really ratchet up the stakes, Cal bumps into Tobin who is holding a dead bird.  Tobin explains that in the tall grass, dead things don’t move.  Meanwhile Cal bumps into a man named Ross who says he’s Tobin’s father.  Can she trust him? 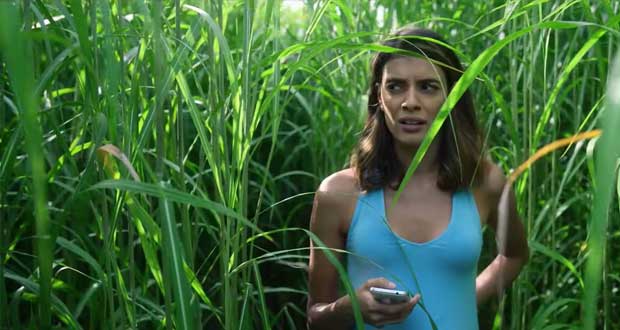 As the story plays out, its clear the film-makers are pulling the rug out from under us.  Sure the tall grass is mysterious but really, its the people who inhabit it who are the real puzzle.  No one is who they initially seem to be.  And as day turns to night and desperation begins to set in, we start to see them all for who they really are.

Quantity is generally not a trait that is much admired in creative industries but some of my favourite writers are legendary for their workmanship and astonishing output.  Agatha Christie wrote 66 novels, 14 short story compilations, 2 works of non-fiction and a play.  Roger Ebert wrote over 10,000 reviews, averaging 300 a year for 40 years.  Stephen King, at the age of 72 has 61 novels and 6 works of non-fiction under his belt.  And it is one of King’s novellas (co-written with his son Joe Hill) upon which In The Tall Grass is based.

King is a wonderful ideas man and in writing such a prolific volume of horror stories he has drawn upon all sorts of material over the years – haunted dogs, haunted cars, haunted toy monkeys, haunted fingers…and with In The Tall Grass, haunted paddocks.  It’s very much b-movie fare obviously, but I enjoy seeing what he does with it.  Not everything needs to be The Shining or Shawshank Redemption.

Watching the opening fifteen minutes, In The Tall Grass struck a familiar chord with me.  The ingeniously claustrophobic and repetitious environment.  The unwilling captives.  The gradual revealing of each person’s true nature.  It reminded me of the wonderful sci-fi horror Cube [1999].  When the credits rolled, I looked it up and sure enough, there he was.  Vicenzo Natali.  The very same director exactly twenty years later!

I loved this movie.  It hasn’t reviewed particularly well (currently 35% on Rotten Tomatoes) and I think the movie loses most people once it introduces the magic rock and the guys in the tall grass start to really go off the rails.  But there’s something about Natali’s style and interest in working with this type of cinematic gimmick that really jives with me.

The horror genre has really come back into vogue in recent years and there has been some absolutely stellar films with world class acting in the likes of Hereditary, Gerald’s Game and The Endless.  But there is plenty of breadth to the horror genre and as someone who used to trawl their local Blockbuster and watch the likes of Doctor Giggles and Chopping Mall, In The Tall Grass is an entertaining if not crude b-movie with a fun hook that reeled me in.  Basically, this is my apologetic way of saying I know this is trash, but it’s absolutely my kind of trash.

After hearing a young boy’s cry for help, a sister and brother venture into a vast field of tall grass in Kansas but soon discover there may be no way out…and that something evil lurks within.